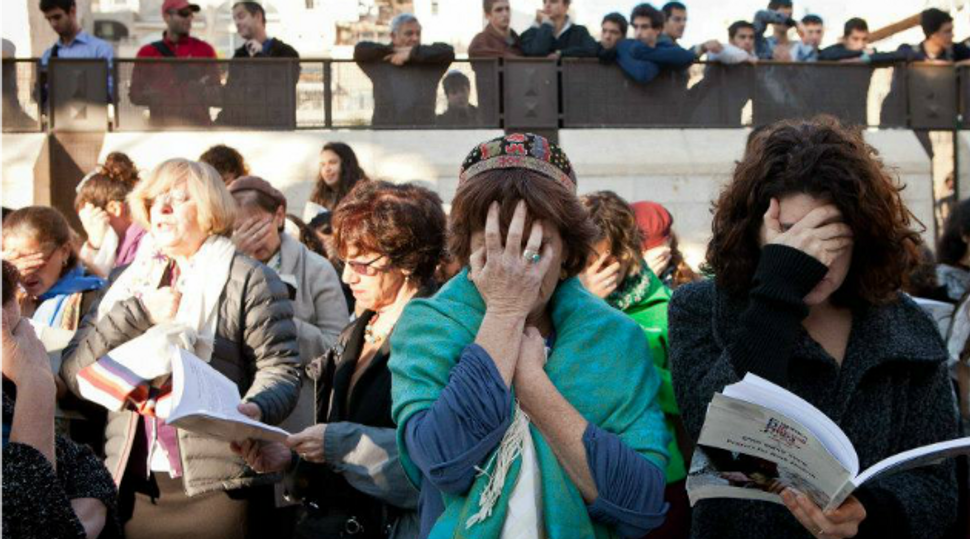 Protest or Prayer? Women pray at the Western Wall. Police detained several of them for breaking religious rules at Judaism?s holiest site. Image by women of the wall

Six women were detained by Jerusalem police for wearing prayer shawls as more than 100 women gathered for the monthly Women of the Wall service at the Western Wall.

The detainments Thursday, on the first day of the Hebrew month Kislev, follow the arrest at last month’s service of Women of the Wall leader Anat Hoffman. Hoffman was not at Thursday’s service, as she was banned from the Wall for 30 days following her arrest on Oct. 17.

Women of the Wall has held a special prayer service at the holy site nearly each month for the last 20 years on Rosh Chodesh, or the beginning of new Hebrew month, at the back of the women’s section. Western Wall regulations dictate that women cannot wear talitot, or prayer shawls, as it contravenes the “local custom” as determined by the Wall’s chief rabbi. In 2003, Israel’s Supreme Court upheld a government ban on women wearing tefillin or talitot, or reading from a Torah scroll at the Western Wall

The detainments occurred before the service began, as women were putting on their talitot.

“We came to pray, especially today, for the peace of the state,” said Lesley Sachs, one of the detainees, referring to fighting in Israel’s south between Israel and Hamas.

While many of the women at the service wore talitot, most wore them in the fashion of a scarf, sidestepping the regulation.

Following Hoffman’s arrest last month, the Israel Religious Action Center, which advocates for religious pluralism, said it planned to submit a petition to Israel’s Supreme Court aiming to change how the Wall’s regulations are decided at the Western Wall Heritage Foundation, which administers the Wall. Hoffman told JTA last month that Women of the Wall hopes to be given one hour to pray every month.

A mix of younger and older women attended the service, along with a handful of male supporters.

“It’s important for me to support women and men who want to come one hour a month,” said Laura Wharton, another detainee.