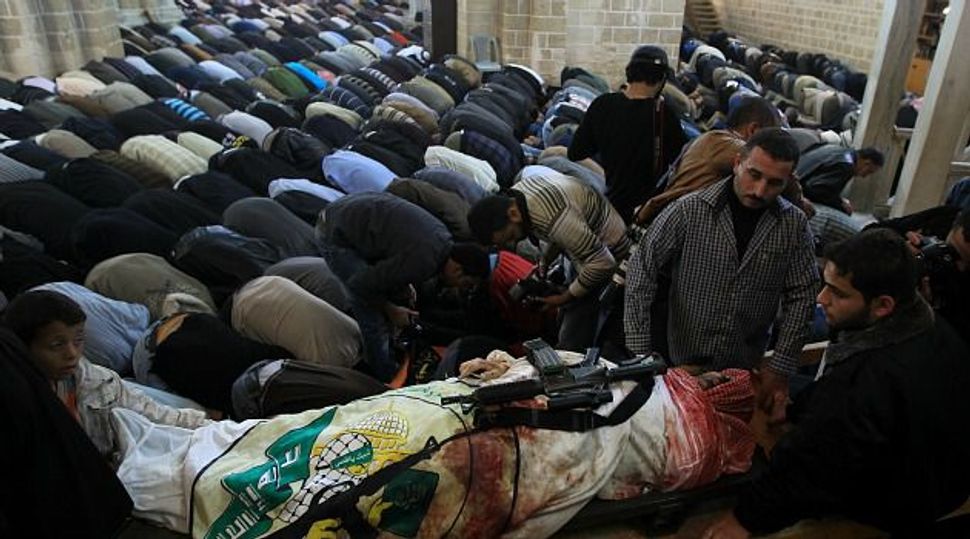 Marked Man: Slain Hamas military chief Ahmad Al-Jabaari may have been lulled into a false sense of security. Image by getty images

Israel’s leaders were literally looking in the opposite direction, and making sure everyone knew it, just before catching Hamas’s top commander in the Gaza Strip off-guard in an air strike that killed him.

In what now appears to have been a diversionary tactic, Prime Minister Benjamin Netanyahu and Defence Minister Ehud Barak paid a visit to the Syrian frontier in the north, hours before the air offensive began in the south.

The show of concern over errant mortar shells that have landed in the Israeli-occupied Golan Heights from Syria was widely reported during the day by Israeli media.

In fact, Israeli experts now say, the visit may have been part of a ploy to deceive Hamas into believing that a truce was in place in Gaza, so that the Israeli army could catch its target, Hamas military mastermind Ahmed Al-Jaabari.

“The sense of complacency that Barak and Netanyahu created … brought Jaabari and his friends out of his holes and made possible the surprise attack,” military affairs analyst Alex Fishman wrote in Israel’s Yedioth Ahronoth newspaper.

Israel has a thick list of potential targets in the Gaza Strip, an enclave regularly criss-crossed by Israeli drones and where militants’ movements are routinely logged. The Shin Bet security service, which oversaw the assassination of Jaabari, keeps tabs on Hamas leaders with a network of informers.

So it surprising that the usually cautious militant, who had just returned from a pilgrimage to Mecca, chose to drive in broad daylight down a main Gaza street. His car was hit by a missile in an attack filmed from the air and put on YouTube.

Jaabari may have been lulled into the open by public signals from Israel that a round of cross-border violence along the frontier in the past week had run its course.

The draft also included mechanisms for maintaining a cease-fire during upticks in rocket fire between Gaza and Israel, the Israeli daily Haaretz reported Thursday, citing Baskin. He reportedly had a relationship with Hamas leaders after he helped negotiate a deal to release captured Israeli soldier Gilad Shalit, who was held by Hamas in Gaza for more than five years.

Israeli officials ordered the hit on Jabari despite knowing about the truce draft, Baskin told Haaretz.

Baskin met Jabari when he was mediating between the Hamas leader and the Israeli representative to the Shalit negotiations.

Baskin told Haaretz that he showed Israeli Defense Minister Ehud Barak a draft of the permanent truce agreement, and said that an interministry committee on the issue was established on the basis of the document.

On Monday, Netanyahu convened his nine-member inner cabinet to discuss an upsurge of Hamas rocket attacks last weekend that had been disrupting life for a million Israelis in the south but seemed to be abating.

It was at that meeting, political sources said, that a Shin Bet plan to assassinate Jaabari was approved and the first act of deception was played out: Benny Begin, a member of the forum, went on Israeli radio to say the current round of violence appeared to be over.

Hamas apparently bought the message. Sami Abu Zuhri, a spokesman for the group, said Israel, in launching the offensive, had violated an informal truce brokered by mediators.

“The factions abided by the understanding of calm, and the occupation (Israel) bears the responsibility for the consequences that will follow the ugly crime,” he said.

Israel had largely suspended assassinations of top Hamas men in recent years, strikes that could have triggered wider violence along the Gaza frontier.

But a looming January national election had increased public pressure on the right-wing Netanyahu to take stronger military action in Gaza to rein in Hamas. A successful campaign could also be a boon for Barak, whose small party, opinion polls show, might not even win enough votes to be returned to parliament.

The initial outlook at home for the two leaders was good: Jaabari’s killing and the start of the offensive drew nearly across-the-board political support from Netanyahu’s rivals, who suspended campaigning in a display of national unity.

Israel used similar ruses to conceal its plans before launching its three-week Gaza war in December 2008.

Days before that offensive began, Barak – defence minister then, as now – made an unusual and unannounced live appearance on a top-rated TV satire show, giving the impression that starting a war could not be further from his mind.

In another twist at the time, officers were summoned from garrisons around Gaza to a weekend with their families at a countryside spa. All but the most senior of those invited commanders were then surprised to be woken up, that Saturday morning, and sent back to base for combat within hours.