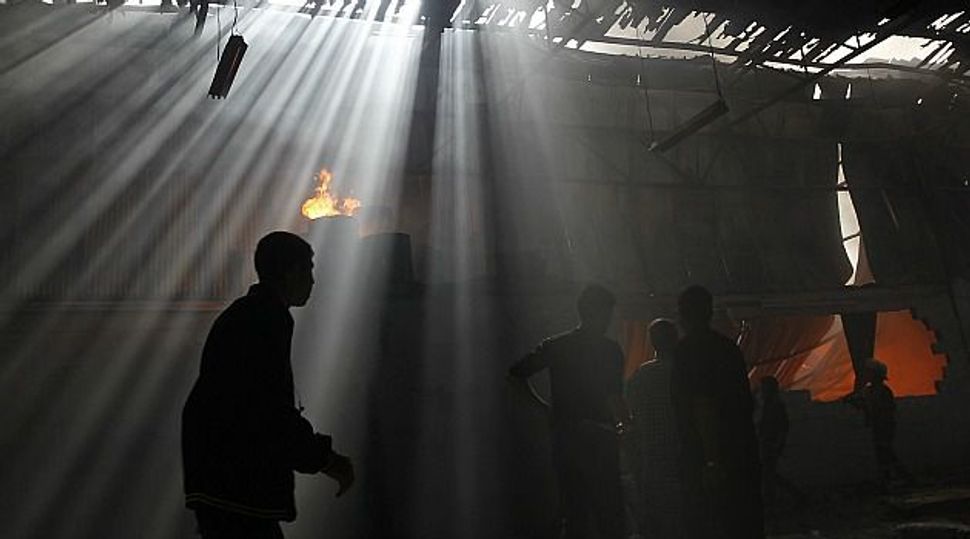 Egypt opened a tiny window to emergency peace diplomacy in Gaza on Friday, but hopes for even a brief ceasefire while its prime minister was inside the bombarded enclave to talk to leaders of the Islamist Hamas movement were immediately dashed.

A rocket fired from Gaza landed in the sea near Tel Aviv after alarms sounded, sending residents of Israel’s commercial capital scurrying for cover for the second straight day.

But a Palestinian official close to Egypt’s mediators told Reuters that Kandil’s visit, which included members of Cairo’s secret service, “was the beginning of a process to explore the possibility of reaching a truce. It is early to speak of any details or of how things will evolve”.

Israel undertook to cease fire during the visit if Hamas did too. But it said rockets fired from Gaza had hit several sites in southern Israel as he was in the enclave.

According to a Hamas source, the Israeli air force launched an attack on the house of Hamas’s commander for southern Gaza which resulted in the death of two civilians, one a child.

But Israel’s military strongly denied carrying out any attacks from the time Kandil entered Gaza, and accused Hamas of violating the three-hour deal. “Israel has not attacked in Gaza for the past two hours,” a spokesman said.

“Even though about 50 rockets have fallen in Israel over the past two hours, we chose not to attack in Gaza due to the visit of the Egyptian prime minister. Hamas is lying and reporting otherwise,” the army said in a Twitter message.

Kandil said: “Egypt will spare no effort … to stop the aggression and to achieve a truce.”

At a Gaza hospital he saw the bloodied body of a child. He left the Gaza Strip after meeting with Hamas leader Ismail Haniyeh, the enclave’s prime minister.

Palestinian medics said two people were killed in the disputed explosion at the house, one of them a child. It raised the Palestinian death toll since Wednesday to 21. Three Israelis were killed by a rocket on Thursday.

Air raid sirens wailed over Tel Aviv on Thursday evening, sending residents rushing for shelter and two long-range rockets exploded just south of the metropolis. The location of the impacts was not disclosed.

They exploded harmlessly, police said. But they have shaken the 40 percent of Israelis who, until now, lived in safety beyond range of the southern rocket zone.

Israel has started drafting 16,000 reserve troops, in what could be a precursor to invasion.

The 21 Palestinian dead include eight militants and 13 civilians, among them seven children and a pregnant woman. A Hamas rocket killed three Israeli civilians a town north of Gaza, men and women in their 30s.

“If Hamas says it understands the message and commits to a long ceasefire, via the Egyptians or anyone else, this is what we want. We want quiet in the south and a stronger deterrence,” Israeli vice prime minister Moshe Yaalon said.

“The Egyptians have been a pipeline for passing messages. Hamas always turns (to them) to request a ceasefire. We are in contact with the Egyptian defence ministry. And it could be a channel in which a ceasefire is reached,” he told Israeli radio.

At the same time, there were signs of possible preparations for a ground assault on Gaza. In pre-dawn strikes, warplanes bombed open land along the border zone with Israel, in what could be a softening-up stage to clear the way for tanks.

Self-propelled heavy artillery was seen near the border.

The United States has asked countries that have contact with Hamas to urge the Islamist movement to stop its recent rocket attacks from Gaza, a White House adviser said.

“We’ve … urged those that have a degree of influence with Hamas, such as Turkey and Egypt and some of our European partners, to use that influence to urge Hamas to de-escalate,” Ben Rhodes, deputy national security adviser, said in a conference call with reporters.

U.S. Defense Secretary Leon Panetta said in an interview with Voice of America: “I understand the reasons Israel is doing what they’re doing. They’ve been the target of missiles coming in from Gaza … .”

EGYPT ON THE SPOT

The Gaza conflagration has stoked the flames of a Middle East ablaze with two years of Arab revolution and a civil war in Syria that threatens to engulf the whole region.

Hamas refuses to recognise Israel’s right to exist. By contrast, Palestinian President Mahmoud Abbas, who rules in the nearby West Bank, does recognise Israel, but peace talks between the two sides have been frozen since 2010.

Abbas’s supporters say they will push ahead with their plan to become an “observer state” rather than a mere “entity” at the United Nations later this month.

Despite fierce opposition from both Israel and the United States, they look certain to win the vote in the General Assembly, where they have a built a majority of supporters.

Egypt’s new Islamist president, Mohamed Mursi, viewed by Hamas as a protector, led a chorus of denunciation of the Israeli strikes by allies of the Palestinians.

Mursi faces domestic pressure to act tough. But Egypt gets $1.3 billion a year in U.S. military aid and looks to Washington for help with its ailing economy, constraining Mursi despite his need to show Egyptians that his policies differ from those of his U.S.-backed predecessor, Hosni Mubarak.

Hamas leader Ismail Haniyeh on Thursday urged Egypt to do more to help the Palestinians.

“We call upon the brothers in Egypt to take the measures that will deter this enemy,” the Hamas prime minister said.

The appeal poses a test of Mursi’s commitment to Egypt’s 1979 peace treaty with Israel, which the West views as the bedrock of Middle East peace.

The Muslim Brotherhood, which brought Mursi to power in an election after the downfall of pro-Western Hosni Mubarak, has called for a “Day of Rage” in Arab capitals on Friday. The Brotherhood is seen as the spiritual mentor of Hamas.

The Israel Defence Forces (IDF) said they had targeted over 450 “terror activity sites” in the Gaza Strip since Operation Pillar of Defence began with the assassination of Hamas’ top military commander on Wednesday by an Israeli missile.

“The sites that were targeted were positively identified by precise intelligence over the course of months,” it said. “The Gaza strip has been turned into a frontal base for Iran, forcing Israeli citizens to live under unbearable circumstances.”

Israeli bombing has not yet reached the saturation level seen before it last invaded Gaza in the first days of 2009, when armoured bulldozers and tanks flattened whole districts of the crowded enclave to make way for fire bases and open routes for infantry.