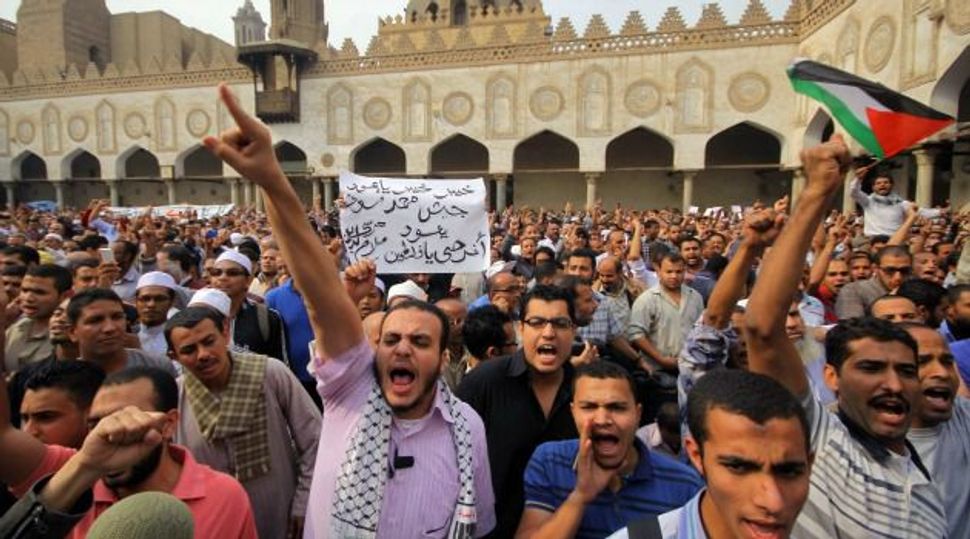 Thousands gathered in Egyptian cities on Friday to protest against Israeli air strikes on the Gaza Strip as Egypt’s president vowed to support the enclave’s people in the face of “blatant aggression”.

Western governments are watching Egypt’s response to the attacks for signs of a more assertive stance towards Israel since an Islamist came to power in the Arab world’s most populous nation.

President Mohamed Mursi is mindful of anti-Israeli sentiment among Egyptians emboldened by last year’s Arab Spring uprising but needs to show Western allies his new government is no threat to Middle East peace.

His Prime Minister Hisham Kandil visited Gaza on Friday in a demonstration of solidarity after two days of strikes by Israeli warplanes targeting Gaza militants. Medics say 22 Palestinians have died in the offensive.

Three Israelis were killed by a rocket fired from Gaza on Thursday.

“We see what is happening in Gaza as blatant aggression against humanity,” Mursi said in comments carried by Egypt’s state news agency. “I warn and repeat my warning to the aggressors that they will never rule over the people of Gaza.”

“I tell them in the name of all the Egyptian people that Egypt today is not the Egypt of yesterday, and Arabs today are not the Arabs of yesterday,” he said.

Mursi’s toppled predecessor Hosni Mubarak was a staunch U.S. ally who upheld a cold but stable peace with Israel.

The new president has vowed to respect a three-decade peace treaty with the Jewish state but ties have been strained by protests that forced the evacuation of Israel’s ambassador to Cairo last year and cross-border attacks by Islamist militants.

“Gaza Gaza, symbol of pride”, they chanted, and “generation after generation, we declare our enmity towards you, Israel.”

“I cannot as an Egyptian, an Arab and a Muslim just sit back and watch the massacres in Gaza,” said protester Abdel Aziz Nagy, 25, a member of the Muslim Brotherhood.

Protesters were marching from other areas of Cairo towards Tahrir Square, the main rallying point for last year’s uprising.

In Alexandria, around 2,000 protesters gathered in front of a mosque, some holding posters demanding Egypt’s border crossing to Gaza be opened to allow aid into the impoverished enclave.

Hundreds also gathered in the Egyptian cities of Ismailia, Suez and al-Arish to denounce Israel’s attacks.