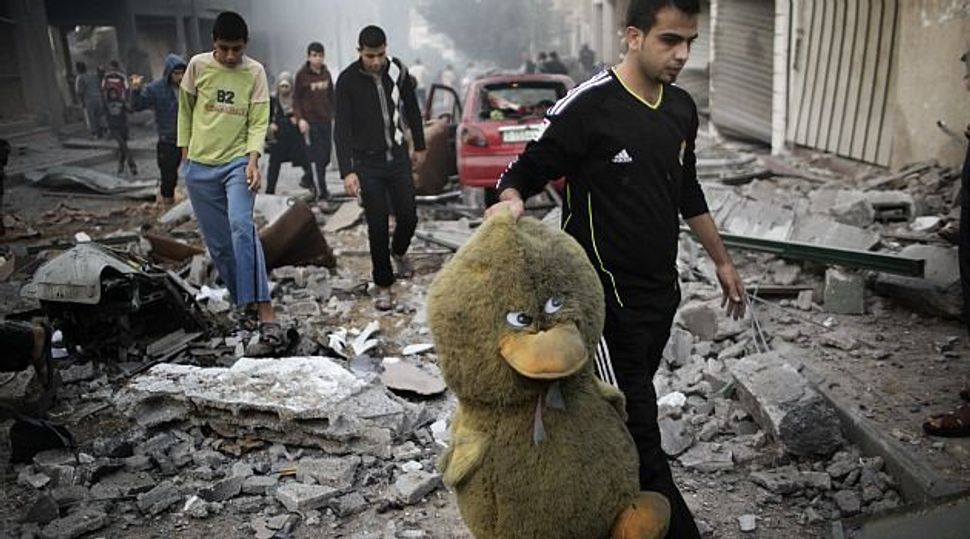 Deadly Attack: Israel hasn?t offered an official explanation for an air strike that wiped out an entire Gaza family, including several children. Media reports say it was targeting a Hamas militant who lived in the building. Image by getty images

The Israeli military on Monday said it could not yet provide an explanation about an air strike on Gaza that killed 11 Palestinian civilians, including nine members of a single family.

The attack brought a three-storey home crashing down on the al-Dalu family inside and killed two of their neighbours. It was the highest number of deaths in a single incident since an Israeli offensive began on Wednesday with the declared aim of ending years of sporadic cross-border rocket fire.

A day after Sunday’s strike, whose victims spanned four generations, it was still not clear from Israeli comments why the building had been hit.

A military spokeswoman told Reuters the circumstances were still under investigation and she could not provide any details at this stage.

The Israeli newspapers Haaretz and Maariv said the army had fired at the wrong house, while Israel’s top-selling daily, Yedioth Ahronoth, reported the al-Dalu home was indeed the target and that it housed a Hamas militant.

Around the time of the attack, the military said it had hit the commander of Hamas’s rocket-launching operations. They named him as Yihia Abayah.

Soon after, reports began coming in that a family was killed in the strike.

“Although I don’t know the outcome, there were civilians harmed by this”.

But around the al-Dalu’s home, people say they know nothing of Yihia Abayah.

Hatem al-Dalu, a relative of the family, said: “I have never heard such a name (Yihia Abayah). This is nonsense.”

Some Israeli media speculated the target of the attack was a different militant, a Hamas-affiliated engineer thought to be in the house.

Sources in Gaza reject that theory flat out. People who know the family said its father is a grocery-shop owner and that he was not at home when the dwelling was hit. On Monday, rescue workers continued to search for another son and daughter who could be buried in the rubble.

Brigadier-General Asaf Agmon, a retired senior commander in the Israeli air force, said that tragic mistakes can happen if intelligence is wrong or if aircraft misfire.

Israeli drones routinely overfly Gaza. The military is widely believed to use militants’ cell phones to track them as well as tips from informers.

“The process of approving a target in this kind of operation is a long one,” Agmon said. After intelligence provides data on a target, “we check that he really does have blood on his hands and that he intends to continue with such activity”.

Information is verified with more than one source, he said.

“If the target is located in a place where there are innocent people – the operation is not approved,” Agmon said.

At least 90 Palestinians have been killed in the Gaza offensive so far, about half of them non-combatants, including 22 children, medical officials said. Three Israeli civilians were killed on Thursday by Palestinian rockets.