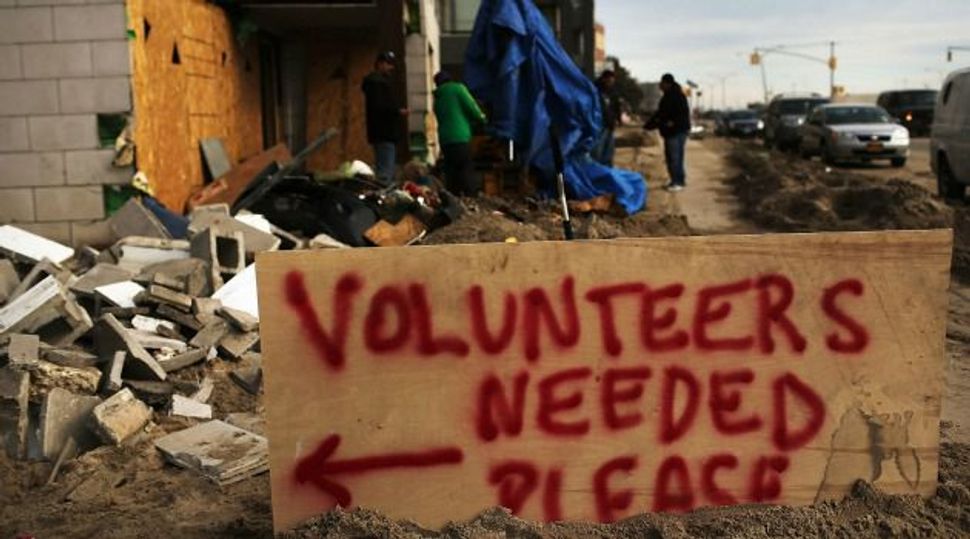 Kenny Vance’s multimillion-dollar beach house has stood proudly on the Long Island shore and weathered all manner of storms since 1916. Then came Sandy.

Vance, a 68-year-old musician who has lived in Belle Harbor, N.Y., for most of his life, was preparing to perform on a cruise ship when newscasters first warned of a major storm heading for the East Coast. But Vance had seen this movie before and knew the protocol. He boxed up his most precious belongings, rolled out the storm shutters and left.

From a ship docked in Puerto Rico, Vance watched superstorm Sandy destroy everything he owned.

“Once I saw the size of the storm, and heard the winds were coming from the south, I knew I was screwed,” Vance, who gained fame as the lead singer of the Planotones, told JTA. “The winds blew off the top of my house, and the rest of the structure basically crumbled. Everything is gone.”

Among his losses are countless pieces of precious memorabilia accumulated over the course of a nearly 50-year music career: his priceless collection of vintage guitars, a slot machine from the 1900s valued at $20,000 and a lamp that belonged to the late New Mexico artist Tony Price. Not the least of his worries, Vance is now homeless and living at a hotel on Staten Island.

“There’s just no way to get these things replaced, and I just redid my kitchen and bathrooms,” Vance said. “My grandkids would come stay here with me every summer; I’ve lost all that. And my feral cat I lived with for over fours years, she’s gone, too.”

Some three weeks after Sandy washed ashore, power has been largely restored in the tristate area of New York, New Jersey and Connecticut and, for most people, life has gradually returned to normal. But for some, normal has been forever redefined.

“The history of our temple is now just moldering pulp,” said Amy Cargman, president of the West End Temple in Neponsit, a neighborhood just west of Belle Harbor on the Rockaway Peninsula in Queens.

“Everything was completely decimated,” Cargman said. “We took the Torahs out, fortunately, but everything from prayer books to pews to the rabbi’s personal library is gone.”

Residents of Belle Harbor and Neponsit, both affluent areas, perhaps were better equipped than most to weather a catastrophic weather event. They had cars and cash and cruise ship evacuation routes – unlike many of their neighbors in the Rockaways and nearby Brooklyn and Staten Island. But even with comparatively deep pockets and up-to-date insurance payments, few will ever fully restore their lives.

“Even if I fix my home, our banks, our schools, our gyms, our temples, our restaurants are all gone,” said Laurie Musumeci, a 56-year-old real estate agent who lives near Vance and also is a member of the West End Temple. “It doesn’t feel like home. I’m right on the ocean but it’s hard for me to look at it right now. I can’t believe something I’ve loved my whole life did this to us.”

Musumeci’s family lost the five cars that were in her driveway when the storm hit as well as the basement of her home, which her grandfather built in 1939 and had served as her office and her son’s apartment. Musumeci estimates she needs $64,000 for repairs – the $2,700 she’s received so far from the Federal Emergency Management Agency is “a joke,” she says – and has had to tap into savings set aside for her daughter’s college tuition.

“Our insurance will only cover things they say is expected in the basement, like our boiler and heat system,” she said. “Everything else is gone.”

Elsewhere in the Northeast, residents had more immediate concerns than inadequate insurance payouts and lost guitars. In Atlantic City, which produced some of the most dramatic images of the storm’s devastation, some 6,000 homes were estimated to have been severely damaged and more than 600 people were made homeless.

Three weeks later, city shelters are closed, and in a city that already had a homeless population of about 3,000, other agencies are stepping in to fill the void.

“We’re providing 150 families a day basic necessities of clothing, supplies, food,” said Beth Joseph of Jewish Family Services of Atlantic and Cape May counties. “Many people’s houses were flooded with their electrical systems and furnaces destroyed, so you’re looking at hundreds of people displaced. Also, tons of businesses were ruined and it might be a year before they are opened, so we need to account for the unemployed who can no longer support themselves.”

Joseph’s organization has raised more than $50,000 to provide temporary housing for families ineligible for federal assistance, a sum that hardly scratches the surface of what is needed. And the situation is likely to get worse once FEMA pulls out.

“There’s still so much to do, and the money we’ve raised so far will not be enough,” Joseph said.

Millions of dollars have been raised by Jewish organizations and countless volunteer efforts have been mobilized. UJA-Federation of New York has allocated some $10 million for relief in eight counties, including the five boroughs of New York City, Westchester and Long Island. The federation, the country’s largest, raised an additional $2.5 million through its website.

So far, $3.2 million has been disbursed to beneficiary agencies to provide food, water, shelter and other necessities, but the organization is beginning to look ahead as well – to permanent housing, trauma treatment, and services for the poor and elderly who don’t have insurance.

“Even though it’s a few weeks after the storm, the basic needs are not going to go away so fast,” said Alice Blass of the the Jewish Federation of Northern New Jersey, which has raised $54,000 for storm relief, about half of which has been disbursed to agencies.

Nationally, the Jewish Federations of North America, the umbrella group of all the local federations, has raised about $3 million for hurricane relief – about $2.2 million from other federations and the rest from its own coffers. About $250,000 was allocated to New York and $350,000 to federations in New Jersey and Rockland County, north of New York City.

That’s not counting dozens of smaller volunteer efforts that have drawn support from across the Jewish community. More than 60 carloads of supplies were donated by area synagogues to coastal New Jersey communities. And a synagogue in Baltimore bused hundreds of volunteers to the heavily Jewish Brooklyn neighborhood of Seagate, which even now still has the feel of a disaster zone.

On a sunny Sunday afternoon, volunteers wearing boots and masks filled the streets. Kids worked on assembly lines to help rip out the basements of homes and teenagers weaved through the narrow streets on ATVs handing out cleaning supplies. Shomrim, the Jewish neighborhood watch group, had set up a command unit and was handing out hot food and drinks. Along the beach, gaping holes in waterfront homes offered a peek at what was lost inside. Broken china, pieces of detached roofing, and scattered electronics littered the beach and sidewalks.

Pinny Dembitzer, the president of the Seagate Homeowners Association, put on a brave face as he helped organize the cleanup, directing ambulances, food trucks and cleaning supplies to the proper destinations while answering three cell phones. Dembitzer hopes the neighborhood will come back stronger than ever. But surrounded by ruination and confronting untold rebuilding costs, that future seemed perilously hard to imagine.

“Nobody here was spared,” Dembitzer said. “Every single house you’re looking at had damage, and it will take millions to see repairs. I’ve been here 30 years, and I’ve never had a flood. Ninety-five percent of the people here don’t have insurance.”