Joy Over Gaza Ceasefire Could be Shortlived 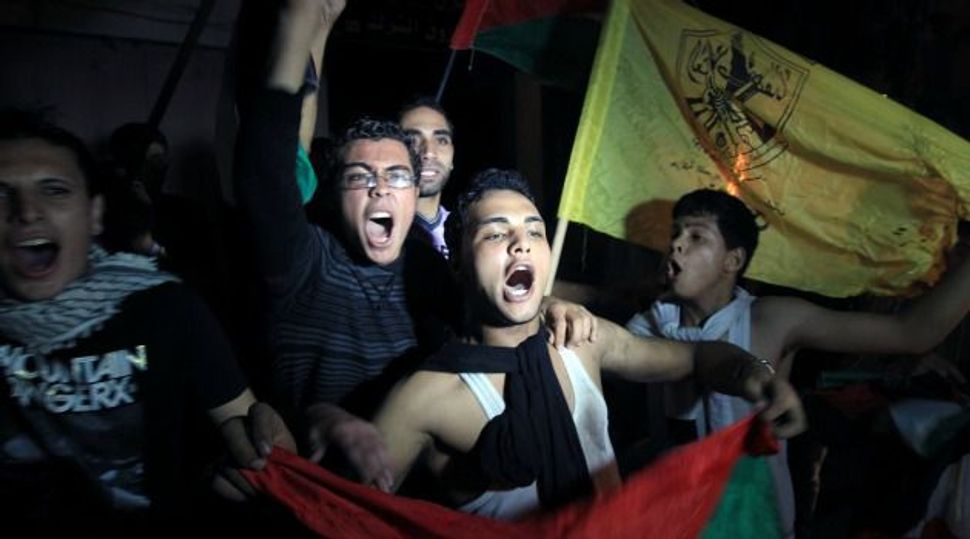 Can It Last? Palestinians celebrated and many Israelis breathed a sigh of relief at news of a truce in Gaza. But how long will it last? Image by getty images

Triumphal Hamas celebrated a “victory” in their Gaza stronghold on Wednesday after a truce was declared with Israel, where a sober reckoning of how the next round may go underscored the total lack of trust between the two foes.

Palestinians and Israelis alike were relieved that their eight-day conflict had come to an end without a bloody invasion of the Gaza Strip. But on both sides there was a foreboding that their ceasefire might not last very long.

“We are sceptical,” said a senior Israeli government official, who declined to be named. “But the Egyptians and Americans have backed this deal, so if it falls apart they know that we would have a legitimate reason to go in hard.”

On the face of it, both Israel and the Islamist group Hamas, which rules Gaza, can draw positive conclusions at the end of a brutal clash that killed 162 Palestinians, including 37 children, and five Israelis.

Although Hamas lost its top military commander and suffered serious hits to its infrastructure and weaponry, it has nonetheless emerged with its reputation in the Arab world significantly enhanced and its standing at home embellished.

Israel can take comfort from the fact it dealt painful blows to its enemy, found a way to work with the Islamist leadership of Egypt, and showed that it can defend itself from a barrage of incoming missiles with its high-tech Iron Dome interceptor.

“No one is under the illusion that this is going to be an everlasting ceasefire. It is clear to everyone it will only be temporary,” said Michael Herzog, a former chief of staff at the Israeli ministry of defense.

“But there is a chance that it could hold for a significant period of time, if all goes well,” he told Reuters.

Israel and Hamas have been here before. In 2009, they pulled apart after a 22-day conflict and it took many months before Gaza militants felt strong enough to start firing rockets again out of their tiny, impoverished enclave.

At the time, ordinary Gazans resented Hamas, accusing it of instigating a devastating war and invasion that killed 1,400 Palestinians. Three years on, the mood was different and thousands took to the streets to celebrate the ceasefire.

After years of isolation, a succession of Arab VIPs rushed to the enclave to show their solidarity as Israeli warplanes were striking their targets, and the leaders of Hamas were treated with careful respect by Egypt – unthinkable in the days of the ousted president, Hosni Mubarak.

“Hamas is in a stronger position than ever,” said Gaza political analyst Talal Okal, adding that he too did not expect the truce to become a permanent fixture. “The Palestinians must not stop preparing themselves for another round,” he added.

Hamas refuses to recognise Israel’s right to exist and has scorned Palestinian President Mahmoud Abbas for seeking a diplomatic solution.

The Western-backed Abbas, who holds sway in the Israeli-occupied West Bank, cut a lonely figure during the crisis, seeing Hamas’s credibility rise in the Arab world at his own expense.

In contrast with wild jubilation in Gaza, a few hundred residents in southern Israel took to the streets to denounce the deal, fearing that after a brief pause they would once more be the target of regular rocket attacks.

With a general election just two months away, the political consensus of the last week immediately evaporated and opposition figures swiftly laid into Prime Minister Benjamin Netanyahu for not using the mighty army he had positioned on the Gaza borders.

“I think the goals of the operation weren’t achieved,” said Shaul Mofaz, head of the centrist Kadima party.

“Israeli citizens expected something else. They expected a reality in which the Israeli army forced a truce on Hamas. Today (Egyptian President Mohamed) Mursi, with U.S. backing, forced Israel to a ceasefire,” he told Channel 1 television.

Netanyahu will put a very different spin on it.

He showed he could work with the Islamist Mursi, thereby shoring up Israel’s sagging relations with Cairo. He also re-invigorated ties with U.S. President Barack Obama, who gave him constant public support despite their famously bad relations.

Moreover, he will point out that he set limited goals when he launched the air offensive last week. He never vowed to topple Hamas, but rather promised to cripple its infrastructure.

Although the Israeli military has declared its mission accomplished, the public might be hard to convince.

“There was no decisive victory here, there is nothing so dramatic that Israel can be proud of,” said Giora Eiland, a former National Security Adviser. “But the situation was managed in the right way and it was clear that Israel enjoyed certain international support.”

Perhaps Israel’s biggest winner was the Iron Dome interceptor that had a 84 percent success rate against incoming missiles, according to the military, almost certainly saving many lives and reducing the pressure for any escalation.

Politicians and military experts are likely to take a much tougher look at the role of the air force, with criticism already surfacing that it was over cautious in its targeting for fear of repeating the mass casualties seen in the 2008-2009 war.

“The Iron Dome has proved itself to be a game changer,” said Yohanan Plesner, a Kadima politician who sits on parliament’s foreign affairs and defence committee.

“But on the offensive side, the more we are surgical and cautious then the harder it is to achieve the goals of long-term calm. The more we limit ourselves, the less of a price Hamas has to pay,” he told Reuters.

Although Hamas certainly suffered significant losses, it also had much to boast about to its own people – particularly the fact that it managed for the first time to send missiles flying towards both Tel Aviv and Jerusalem.

“Israel won’t think of challenging us like this ever again,” said Mohammed al-Ghazaleh, firing a deafening burst from his Kalashnikov rifle to celebrate the truce in Gaza city.

But such thinking is almost certainly a miscalculation that already sows the seeds for the next confrontation.

Joy Over Gaza Ceasefire Could be Shortlived