Quiet Day on Both Sides of Gaza Border 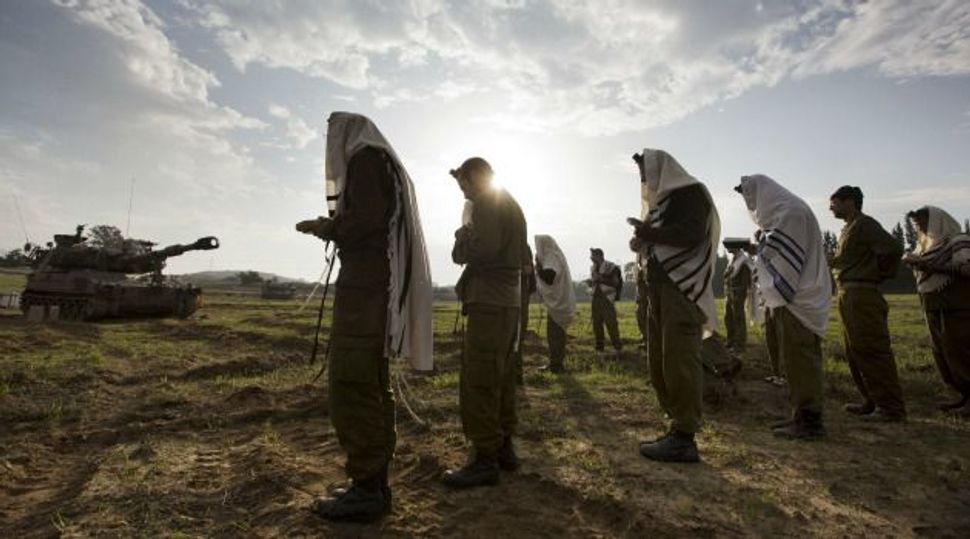 Wary Relief: Israeli soldiers remain massed along the Gaza border, despite the ceasefire that appeared to be holding. Image by getty images

A ceasefire between Israel and Gaza’s Hamas rulers took hold on Thursday after eight days of conflict, although deep mistrust on both sides cast doubt on how long the Egyptian-sponsored deal can last.

Quiet reigned on both sides of the frontier overnight and during the morning after a dozen rockets landed in Israel in the initial hours after the truce came into force late on Wednesday. Israeli police said there had been no casualties or damage.

The deal brokered by Egypt’s new Islamist government, working with the United States, prevented – at least for the moment – an Israeli invasion of the Palestinian enclave.

Gaza medical officials said 162 Palestinians, more than half of them civilians, including 37 children and 11 women, were killed. Nearly 1,400 rockets were fired into Israel, killing four civilians and a soldier, the Israeli military said.

Israel’s defence minister said Israel dropped 1,000 times as much explosive on the Gaza Strip as had landed in Israel.

“Israel learnt a lesson it will never forget,” said 51-year-old Khalil al-Rass from Beach refugee camp in the city of Gaza.

In rocket-hit towns in southern Israel, schools remained closed as a precaution. Nerves were jangled when warning sirens sounded, in what the military quickly said was a false alarm.

Trust was in short supply. The exile leader of Hamas, Khaled Meshaal, said his Islamist movement would respect the truce if Israel did, but would respond to any violations. “If Israel complies, we are compliant. If it does not comply, our hands are on the trigger,” he told a news conference in Cairo.

Israeli Prime Minister Benjamin Netanyahu said he had agreed to “exhaust this opportunity for an extended truce”, but told his people a tougher approach might be required in the future.

Facing a national election in two months, he swiftly came under fire from opposition politicians who rallied to his side during the fighting but now contend he emerged from the conflict with no real gains for Israel.

“You don’t settle with terrorism, you defeat it. And unfortunately, a decisive victory has not been achieved and we did not recharge our deterrence,” Shaul Mofaz, leader of the main opposition Kadima party, wrote on his Facebook page.

If the truce holds, it will give the 1.7 million Gazans respite from days of air strikes and halt rocket salvoes from militants that have unnerved a million people in southern Israel and reached Tel Aviv and Jerusalem for the first time.

Both sides quickly began offering differing interpretations of the ceasefire, which highlighted the many actual or potential areas of discord.

According to a text of the agreement seen by Reuters, both sides should halt all hostilities, with Israel desisting from incursions and targeting of individuals, while all Palestinian factions should cease rocket fire and cross-border attacks.

The deal also provides for easing Israeli restrictions on Gaza’s residents, who live in what British Prime Minister David Cameron has called an “open prison”.

The text said procedures for implementing this would be “dealt with after 24 hours from the start of the ceasefire”.

Israeli sources said Israel would not lift a blockade of the enclave it enforced after Hamas, which preaches the Jewish state’s destruction, won a Palestinian election in 2006.

Israel let dozens of trucks carry supplies into the Palestinian enclave during the fighting. Residents there have long complained that Israeli restrictions blight their economy.

Meshaal thanked Egypt for mediating and praised Iran for providing Gazans with financing and arms. “We have come out of this battle with our heads up high,” he said, adding that Israel had been defeated and failed in its “adventure”.

Israeli Defence Minister Ehud Barak said Hamas had suffered a heavy military blow, including the death of its top commander, killed in an air strike at the start of the operation on Nov. 14 and the deal merely let Hamas surrender while saving face.

“A large part of the mid-range rockets were destroyed. Hamas managed to hit Israel’s built-up areas with around a tonne of explosives, and Gaza targets got around 1,000 tonnes,” Barak told Israel Radio.

“So whoever misses what is happening in Gaza does not understand that this entire agreement is a paper bridge for the defeated so that they can explain to their public how they can even show their faces after what they were hit with for a week.”

Hamas declared Nov. 22 a national holiday marking “the victory of the resistance”. Its spokesman, Sami Abu Zuhri, said: “Resistance has achieved and has imposed a new formula – if you hit Gaza, we will hit Tel Aviv and beyond Tel Aviv.

Some Israelis staged protests against the deal, notably in the southern town of Kiryat Malachi, where three civilians were killed by a rocket from Gaza last week, army radio said.

Interviewed on Israel’s Army Radio, Barak dismissed a ceasefire text published by Hamas as “a piece of paper which I don’t remember anyone going around with – there’s no signature on it”.

He appeared to confirm, however, a key Hamas claim that the Israelis would no longer enforce a no-go zone on the Gaza side of the frontier that the army says has prevented Hamas raids:

“If there are no attacks along the border … then I tell you that there is no problem with them working the farmland on the perimeter up to the fence,” Barak said.

But should the Palestinians exploit such measures to breach the truce, Israel would be “free to act,” he said, adding: “The right to self-defence trumps any piece of paper.”

Egypt, an important U.S. ally now under Islamist leadership, took centre stage in diplomacy to halt the bloodshed. Cairo has walked a fine line between sympathies for Hamas, an offshoot of the Muslim Brotherhood that produced President Mohamed Mursi and much of his government, and preserving its 1979 peace treaty with Israel and its ties with Washington, its main aid donor.

Gaza erupted in a Middle East already shaken by last year’s Arab revolts that toppled several veteran U.S.-backed leaders, including Egypt’s Hosni Mubarak, and by a civil war in Syria, where President Bashar al-Assad is fighting for survival.

Israel, the United States and the European Union all classify Hamas as a terrorist organisation over its refusal to recognise Israel, renounce violence and accept existing interim Palestinian-Israeli peace deal.

But its stance is popular with many Palestinians and has kept the movement competitive with the secular Fatah movement of President Mahmoud Abbas, who remains in the occupied West Bank after losing Gaza to Hamas in a civil war five years ago.

The ceasefire was forged despite a bus-bomb explosion that wounded 15 Israelis in Tel Aviv on Wednesday and Israeli air strikes that killed 10 people in Gaza. It was the first serious bombing in Israel’s commercial capital since 2006. There was no claim of responsibility, though Hamas praised the attack.

Israeli forces detained 55 suspected militants in the West Bank on Thursday, the military said, citing a need to prevent “the infiltration of terrorists into Israeli communities”.

Quiet Day on Both Sides of Gaza Border