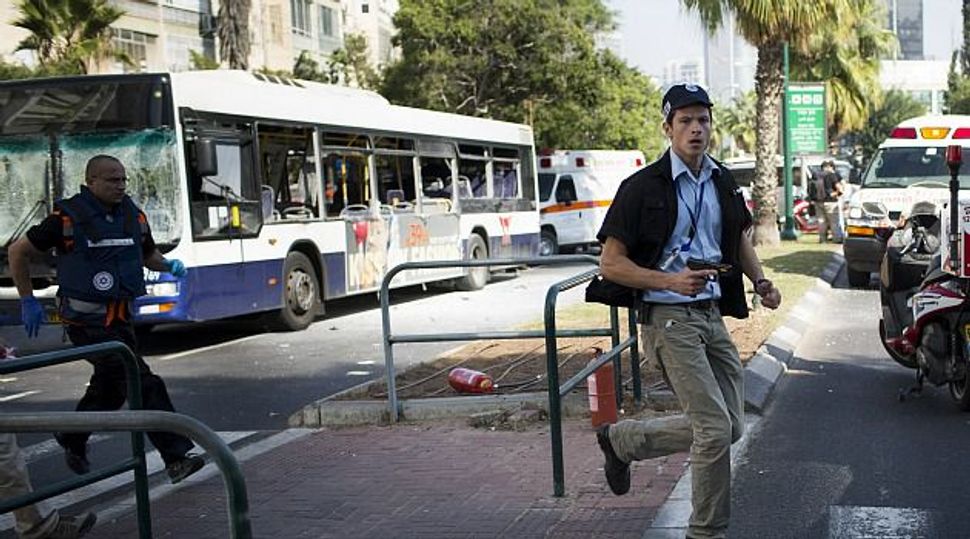 Israeli authorities arrested an Israeli Arab on suspicion of planting a bomb in a Tel Aviv bus that wounded 15 people hours before Israel agreed a ceasefire with Hamas in Gaza, police and security officials said on Thursday.

The Arab citizen of Israel was detained on Wednesday night, they said. Also arrested, police said, were a number of Palestinians affiliated with Hamas and Islamic Jihad militants in the Israeli-occupied West Bank on suspicion of having recruited the Israeli Arab to carry out the bombing.

Police spokesman Micky Rosenfeld did not give names or an exact number of how many people were in custody.

He said the Israeli Arab notified his Palestinian handlers in the West Bank when the bomb was in place on the commuter bus, and they then detonated the device with a mobile phone.

“The investigation is still under way, and other arrests are expected,” the Shin Bet internal security service said in a statement.

Wednesday’s bus bombing had raised the possibility that Palestinians had slipped in from the nearby West Bank to carry out the attack.

While Hamas rules Gaza, a fenced-off enclave under Israeli blockade, the U.S.-backed Palestinian Authority governs in parts of the West Bank not under Israeli occupation. But many of its residents are sympathetic with his Islamist Hamas rivals who govern Gaza and reject permanent peace with the Jewish state.

Earlier on Thursday, the Israeli army said that 55 suspected Palestinian militants had been arrested in the West Bank, citing a need to maintain calm after a truce ended the Gaza fighting.

The detainees were from various armed Palestinian factions and included “senior operatives,” the army said in a statement, adding that it would “continue to maintain order … and prevent the infiltration of terrorists into Israeli communities”.

Israel launched an air offensive against Hamas and other Gaza militant factions on Nov. 14 with the declared aim of stopping their rocket fire into the Jewish state. The sides entered an Egyptian-brokered ceasefire on Wednesday night.

During the Gaza conflict, two Palestinians were shot dead during anti-Israel demonstrations in the West Bank that turned into confrontations with the army.