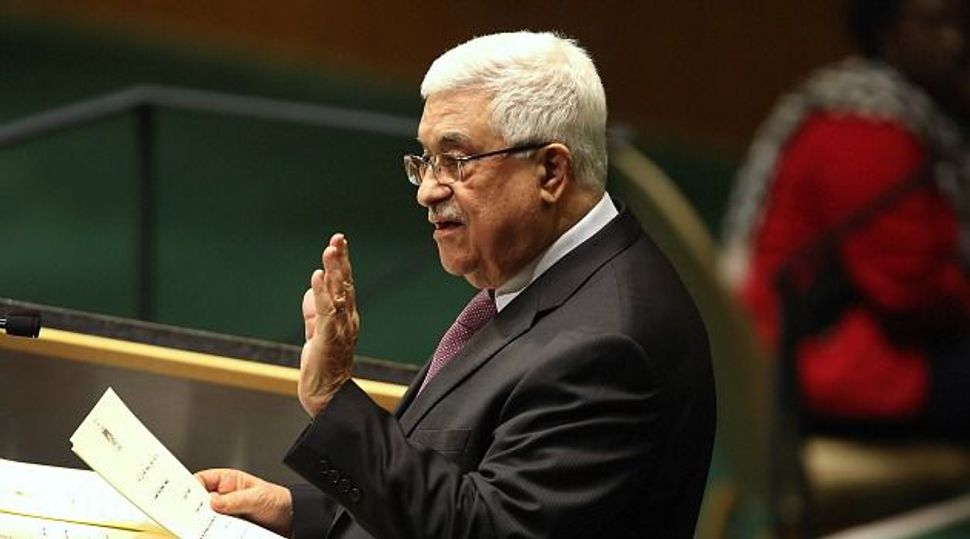 U.N. Upgrade: Mahmoud Abbas asked the U.N. to upgrade the status of the Palestinian Authority. Image by getty images

There were 138 votes in favor, nine against and 41 abstentions. Three countries did not take part in the vote to upgrade the Palestinian Authority’s observer status at the United Nations to “non-member state” from “entity.”

The assembly approved the upgrade despite threats by the United States and Israel to punish the Palestinians by withholding funds for the West Bank government. U.N. envoys said Israel might avoid harsh retaliation as long as the Palestinians did not seek to join the International Criminal Court.

The much-anticipated vote came after Abbas denounced Israel for its “aggressive policies and the perpetration of war crimes” from the U.N. podium, remarks that elicited a furious response from the Jewish state.

“Sixty-five years ago on this day, the United Nations General Assembly adopted resolution 181, which partitioned the land of historic Palestine into two states and became the birth certificate for Israel,” Abbas told the 193-nation assembly after receiving a standing ovation.

“The General Assembly is called upon today to issue a birth certificate of the reality of the State of Palestine,” he said.

“These are not the words of a man who wants peace,” Netanyahu also said in a statement released by his office in Israel.

At least 17 European nations voted in favor of the Palestinian resolution, including Austria, France, Italy, Norway and Spain. Abbas had focused his lobbying efforts on Europe, which supplies much of the aid the Palestinian Authority relies on. Britain, Germany and others chose to abstain.

The Czech Republic was unique in Europe, joining the United States, Israel, Canada, Panama and tiny Pacific Island states likes Nauru, Palau and Micronesia in voting against the move.

After the vote, U.S. Ambassador to the United Nations Susan Rice called for the immediate resumption of peace talks.

“The Palestinian people will wake up tomorrow and find that little about their lives has changed save that the prospects of a durable peace have only receded,” she said.

She added that both parties should “avoid any further provocative actions in the region, in New York or elsewhere.”