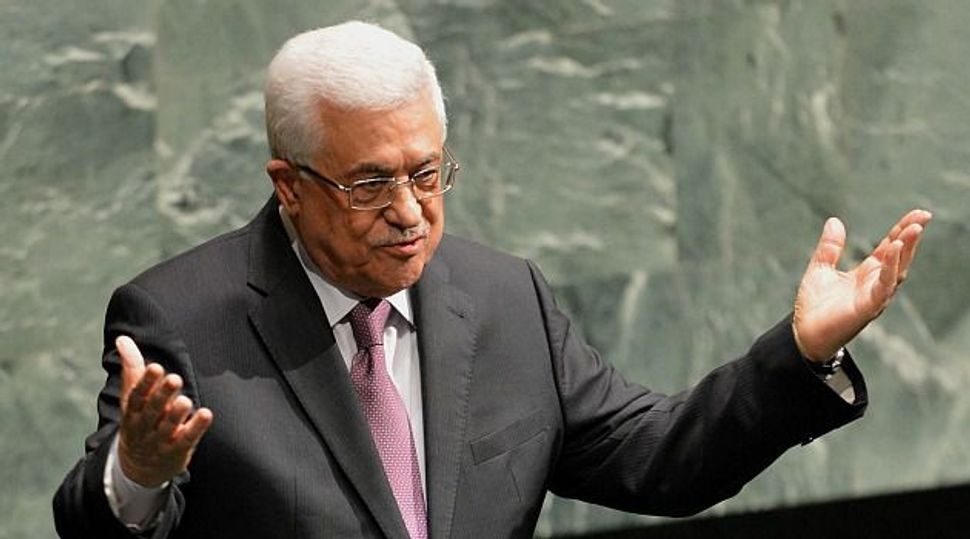 Palestinian President Mahmoud Abbas on Thursday urged the U.N. General Assembly to grant de facto recognition to a sovereign state of Palestine by upgrading the U.N. observer status of the Palestinian Authority from “entity” to “non-member state.”

“Sixty-five years ago on this day, the United Nations General Assembly adopted resolution 181, which partitioned the land of historic Palestine into two states and became the birth certificate for Israel,” Abbas told the 193-nation assembly after receiving a standing ovation.

“The General Assembly is called upon today to issue a birth certificate of the reality of the State of Palestine,” he said.

The assembly is expected to approve a resolution shortly that implicitly recognizes Palestinian statehood, despite threats by the United States and Israel to punish the Palestinians by withholding funds for the West Bank government.

The move would lift the Palestinian Authority’s U.N. observer status from “entity” to “non-member state,” like the Vatican. It is expected to pass easily in the 193-nation General Assembly. At least 15 European states plan to vote for it.

Israel, the United States and a handful of other members are set to vote against what they see as a largely symbolic and counterproductive move by the Palestinians, which takes place on the anniversary of the assembly’s adoption of resolution 181 on the partition of Palestine into Jewish and Arab states.

Israeli Foreign Minister Avigdor Lieberman is in New York, but did not address the assembly. Israeli U.N. Ambassador Ron Prosor spoke after Abbas, reiterating the Jewish state’s desire for peace with Palestinians, but opposing the resolution.

“It doesn’t enhance peace,” Prosor said ahead of the vote on the resolution. “It pushes it backwards.”

“No decision by the U.N. can break the 4,000-year-old bond between the people of Israel and the land of Israel,” he said.

Granting Palestinians the title of “non-member observer state” falls short of full U.N. membership – something the Palestinians failed to achieve last year. But it would allow them access to the International Criminal Court and other international bodies, should they choose to join them.

“The ICC issue is what the Israelis are really worried about,” a U.N. official said on condition of anonymity. “They know this whole process isn’t really symbolic, except for that.”

Abbas has been leading the campaign to win support for the resolution, which follows an eight-day conflict this month between Israel and Islamists in the Gaza Strip, who are pledged to Israel’s destruction and oppose a negotiated peace.

The U.S. State Department made a last-ditch effort to get Abbas to reconsider, but the Palestinian Authority, which exercises limited self-rule in the Israeli-occupied West Bank, refused to turn back.

Secretary of State Hillary Clinton repeated to reporters in Washington on Wednesday the U.S. view that “the path to a two-state solution that fulfills the aspirations of the Palestinian people is through Jerusalem and Ramallah, not New York.”

The U.S. State Department has repeatedly warned that the U.N. status change could lead to a reduction of U.S. economic support for the Palestinians. The Israelis have also warned they might take significant deductions out of monthly transfers of duties that Israel collects on the Palestinians’ behalf.

Despite its fierce opposition, Israel seems concerned not to find itself diplomatically isolated. It has recently toned down threats of retaliation in the face of wide international support for the initiative, notably among its European allies.

But U.N. diplomats say Israel’s reaction might not be so measured if the Palestinians seek ICC action against Israel on charges of war crimes, crimes against humanity or other crimes the court would have jurisdiction over.

The European Union, a key donor for the Palestinians, has made clear it will not curtail aid after Thursday’s vote.

Flag-waving Palestinians thronged the squares of the West Bank and Gaza Strip before Thursday’s vote. In a rare show of unity, Abbas’s Islamist rivals, Hamas, who have ruled Gaza since a brief civil war in 2007, let backers of the president’s Fatah movement hold demonstrations.

Peace talks have been stalled for two years, mainly over Israeli settlements in the West Bank, which have expanded despite being deemed illegal by most of the world. There are 4.3 million Palestinians in the West Bank and Gaza.

In the draft resolution, the Palestinians have pledged to relaunch the peace process immediately following the U.N. vote.

With strong support from the developing world that makes up the majority of U.N. members, it is virtually assured of securing more than the requisite simple majority. Palestinian officials hope for more than 130 yes votes.

Abbas has focused on securing as many votes as possible from Europe, and his efforts appear to have paid off.

The fiercely pro-Israel Czech Republic was planning to vote against the move, dashing European hopes of avoiding any no votes that would create a three-way split on the continent into supporters, abstainers and opponents.

It was unclear whether some of the many undecided Europeans would join the Czechs. Germany, Hungary, the Netherlands, Estonia and Lithuania plan to abstain.