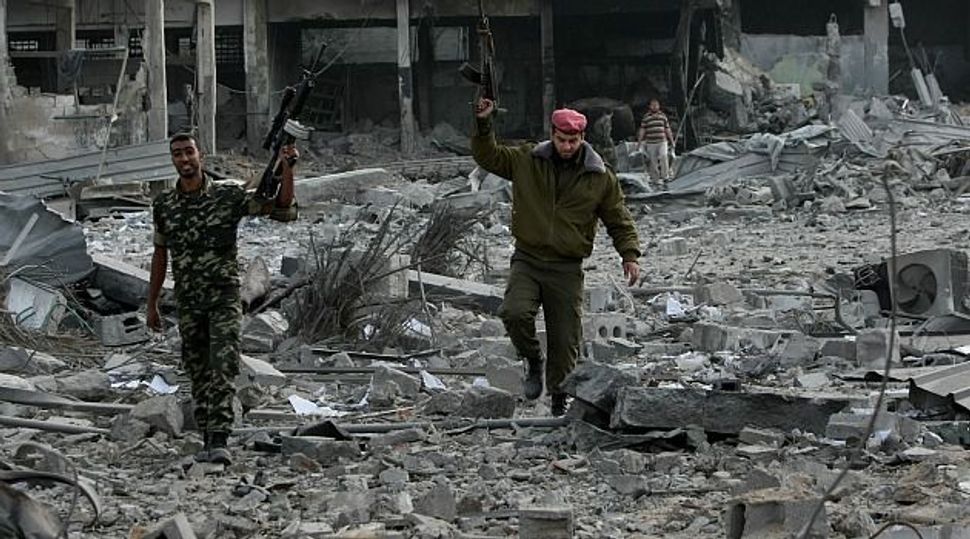 False Celebration: Hamas tried to save face after its crushing defeat in the recent conflict. Israel says it sees a much more cowed enemy. Image by getty images

Israel’s offensive on Gaza has deterred Hamas from new hostilities despite its claims of victory and the front is now at its quietest in 20 years, a senior Israeli military officer said.

The Islamist militant group Hamas, which for the first time managed to fire rockets towards Tel Aviv and Jerusalem during the conflict, says it won in the absence of an Israeli ground invasion that might have toppled its Gaza administration.

The officer said Hamas should be allowed to save face after failing to inflict more pain on the Jewish state.

“Their jubilation was not from victory, it was from their relief at being able to emerge from shelters,” said the officer, who could not be identified by name under military regulations.

“They took a major blow and they have to patch up their honour,” he said.

Hundreds of thousands of Palestinians took to the streets of the Gaza Strip last weekend to welcome the first visit by their previously exiled leader Khaled Meshaal. He declared victory at a rally and vowed to seize all of modern-day Israel one day.

The ceasefire brought Palestinians access to border farmland and fishing waters that Israel had previously kept off-limits and truce talks might lead to a further rolling back of Israel’s blockade of the coastal strip.

There have been scattered confrontations since, with Israeli troops killing two Palestinians who neared the border fence.

The officer said such incidents were rare and lacked the backing of Hamas and other armed Palestinian factions, which he said were now “thoroughly daunted” by Israel and trying to shore up the calm or at least avoid breaching it.

“A quiet like we had over the past month hasn’t happened in 20 years,” the officer said.

Palestinians won limited self-rule in 1993. Gaza was a hotbed of a Palestinian revolt that erupted in 2000, leading Israel to pull out five years later. Hamas took over the enclave in a Palestinian war in 2007 and has often fought Israel since.

The officer would not be drawn on how long the calm might hold but threatened heavier bombing in any future offensive.

Though Israel killed the Hamas military chief, Ahmed al-Jaabari, in a Nov. 14 air strike, the officer said several other commanders had been spared because non-combatants were nearby.

During the fighting, Israeli officials accused militants of sheltering in Gaza’s Shifa hospital and other civilian sites.

In the next round, the officer, said, “I won’t fire on Shifa. But I won’t be able to keep to sterile strikes like I did in this round. I intend to kill the brigade commanders and battalion commanders wherever they are.”

Gaza hospitals said at least half of the Palestinian dead in the offensive were civilians. Israel put the number of slain combatants at 120, around two-thirds of the toll.

Israel says it destroyed almost all of Gaza’s most powerful rockets, whose 75 km (48 miles) ranges put Tel Aviv in reach. The officer said these included Iranian-designed Fajr-5s and Hamas’s homemade Qassam M-75, which, he said, had similar range but carried warheads with only around a tenth of the explosives.

Replacing them would take a long time, the officer said, adding Israel had been reassured as part of the truce that Egypt would clamp down on arms trafficking to Gaza through the Sinai.

Hamas denies it lost a significant amount of hardware and celebrated the fact that it managed to fire several rockets at Tel Aviv and Jerusalem – though these all fell wide or were intercepted by the Iron Dome interceptor system.