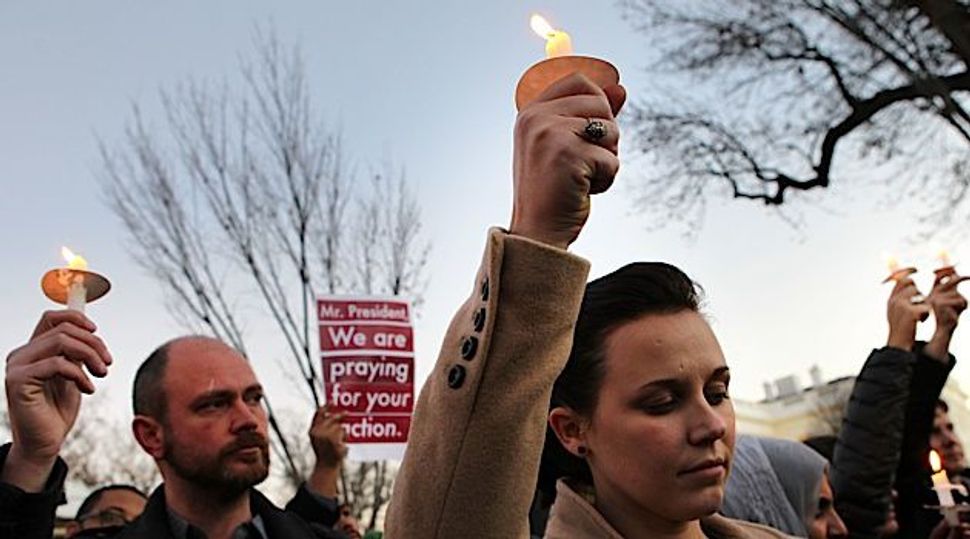 Honoring the Fallen: People gather outside the White House for a candle light vigil to remember the victims of the elementary school shooting in Connecticut. Image by Getty Images

The peace and security of the suburban Connecticut community of Newtown lay shattered on Friday after a gunman attacked a primary school in one of the worst mass shootings in U.S. history.

Tearful parents and children gathered around Sandy Hook Elementary School by midday on Friday, surrounded by police vehicles, as young and old alike struggled to make sense of a shooting rampage that killed at least 28 people, including 20 children.

Mergim Bajraliu, a 17-year-old high school student, said he was at his home nearby when he heard two shots. He and a neighbor ran to the school to find his 9-year-old sister, Venesa, a fourth-grader.

“My heart sank,” he said, describing seeing two students covered in blood being carried out of the building, one of whom looked like his sister. To his relief, his sister later emerged unharmed, and Bajraliu greeted her with a hug.

Home to about 27,000 people, the wealthy, wooded town of Newtown is in southwestern Connecticut, about 80 miles (130 km) northeast of New York City. It is a bedroom community, with many homes situated on multiple acres of land and residents commuting to larger cities including Hartford and Stamford.

“You can never be prepared for this kind of incident,” Connecticut Governor Dannel Malloy told reporters. “What has happened, what has transpired at this school building will leave a mark on this community and every family impacted.”

Local churches quickly organized evening memorial services to help residents cope with the trauma that shattered their illusions of safety.

“I don’t think you are safe anywhere,” said Lori Amaral, who lives about 1/4 mile (400 metres) from the school. She added that her college-age daughter and her friends were afraid even to go out to the vigil.

“They are afraid to go anywhere,” Amaral said.

John Hess was at the airport in Cleveland on Friday morning when his wife, Patty, called him to tell him about the shooting. He immediately hopped a plane home to Newtown, where his family moved recently from nearby Stamford.

“We moved here because we thought it would be a safe community,” Hess said.

Parents of children at the school for kindergarten-to-fourth-grade students gathered at a fire station down the street from the school building to await news of their children.

Helicopters hovered over the school building and scores of cars were parked on lawns up and down the street, reflecting the hurried response of police, parents and officials after the shooting took place around 9:30 a.m. local time (1430 GMT).

“Everybody was crying,” said Alexis Wasik, 8, a third-grader who was in the school when the shooting began. “I was a little scared and felt sick to my stomach.”

Friday’s attack was the deadliest mass shooting at a U.S. school since a 2007 attack at Virginia Tech left 32 people dead.

“I am still in a daze,” said Alexis’ mother, Lynn. “My heart is in a million pieces for the children.”

Juanita Hall, a school counselor in nearby Ridgefield, whose daughter attends a nearby school, said it would take time for the residents to recover from the shock.

“The most difficult thing is to have a conversation with the children about this. My immediate thoughts were about Columbine,” Hall said, referring to a 1999 incident in which students at a Colorado high school killed 13 students and staff.