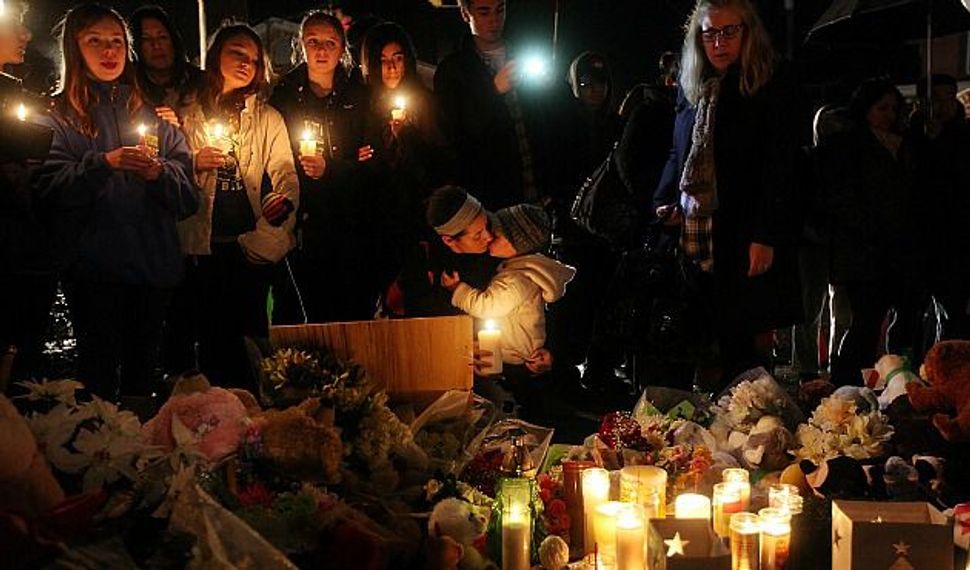 Hug Your Kids: Mourners light candles at memorial for victims of massacre in Newtown, Conn. Image by getty images

The gunman who slaughtered 20 young children in Connecticut stormed Sandy Hook Elementary School armed with hundreds of bullets for a military-style assault rifle and handguns, and shot himself when police closed in, officials said on Sunday.

A more detailed picture of Adam Lanza’s stunning attack on the school in Newtown emerged as worshippers filled Sunday services to mourn the victims and President Barack Obama headed to Connecticut to console the shattered town.

Lanza, 20, who was identified as the gunman by police for the first time on Sunday, shot his way into the school on Friday, firing away at students and staff with a Bushmaster AR 15 rifle, officials said.

He also carried two handguns and hundreds of bullets in “multiple” high-capacity magazines of about 30 rounds each, and had a fourth weapon in reserve – a shotgun in his car outside, Connecticut state police Lieutenant Paul Vance said.

“The Bushmaster was used … in the school in its entirety and the handgun was used to take his own life,” Vance said, adding that Lanza’s motive for the massacre was not known.

All the dead children were either 6 or 7 years old, feeding more emotion into a revived debate about whether stricter gun laws could prevent future mass shootings in the United States.

“If this doesn’t shake the consciousness of the country about doing better to protect our children, I don’t know what will,” said Pedro Segarra, mayor of Hartford, the state capital.

While townspeople grieved, investigators examined forensic evidence and scoured the crime scene in a process likely to extend for weeks. Many more witnesses needed to be interviewed, possibly including children who survived the attack, Vance said.

Some of the bodies have been turned over to families, he said.

“We have the best of the best working on this case. … Our goal is to paint a complete picture so that we all know and the public knows exactly what happened here,” Vance said.

Painting part of that picture, Connecticut Governor Dannel Malloy said the gunman shot his way through a school door “using several rounds” before beginning to kill adults and children inside, then killed himself as police closed in.

“This sick fellow, you know, clearly mentally ill, killed his mother, proceeded to go on and kill a great number of people,” Malloy added.

Townspeople and visitors took solace in church on Sunday. Mass at St. Rose Catholic church was packed. The priest’s announcements included news that the Christmas pageant rehearsal would go on as planned, but without 6-year-old Olivia Engel, killed on Friday before she could play the role of an angel.

Obama was scheduled to attend an interfaith vigil with the families of the victims starting at 7 p.m. EST (0000 GMT).

Makeshift memorials appeared in this affluent town of 27,000 people about 80 miles (130 km) from New York City. The largest, festooned with flowers and teddy bears, sat at the end of Dickenson Drive where Sandy Hook Elementary stands.

Residents and visitors streamed past a police roadblock to add to it. One woman knelt down and sobbed violently.

As children walked down the street in the rain, carrying their toys and signs, a man sat on the back of his parked car playing a mournful tune on a violin to accompany them.

“This is a time to come together,” said Carina Bandhaver, 43, who lives in nearby Southbury.

The children who survived will not have to return to the scene of the massacre. They will attend classes at an unused school in a Connecticut town about 7 miles (11 km) away, school officials said. Classes elsewhere in the town will resume on Tuesday, except at Sandy Hook.

Several Democratic lawmakers called for a new push for U.S. gun restrictions on Sunday, including a ban on military-style assault weapons.

Democratic Senator Dianne Feinstein of California, the author of an assault-weapons ban that lapsed in 2004, said she would introduce new legislation this week.

“I think we could be at a tipping point … where we might get something done,” New York’s Charles Schumer, another top Senate Democrat, said on CBS’s “Face the Nation.”

Gun rights advocates have countered that Connecticut already has among the strictest gun laws in the nation.

Obama’s appearance will be watched closely for clues as to what he meant when he called for “meaningful action” to prevent such tragedies.

The president arrived in Connecticut on Sunday afternoon, a day after authorities released the names of the dead and more details emerged about the victims, the gunman and the rampage.

Adam Lanza attended Sandy Hook Elementary as a child, according to former classmates.

Police were trying to establish the relationship between Adam Lanza, Nancy Lanza and the school, and whether the mother and her sons were frequent visitors to gun ranges, according to a law enforcement official briefed on the investigation.

In addition to the military-style Bushmaster assault rifle, a civilian version of the weapon used by U.S. forces in Afghanistan, police said Lanza carried Glock 10 mm and Sig Sauer 9 mm handguns into the school.

Nancy Lanza legally owned a Sig Sauer and a Glock, handguns commonly used by police, in addition to the long gun, according to law enforcement officials.

Lanza had struggled at times to fit into the community and his mother pulled him out of school for several years to home-school him, said Louise Tambascio, the owner of My Place Restaurant, where his mother was a long-time patron.

Officials said they were concerned misinformation and threats about the case were being spread on social media websites. Police said a telephone bomb threat forced the evacuation of the St. Rose church. It was searched and declared clear.

David Fein, the U.S. attorney for Connecticut, issued a stern warning that harassment of victims or their relatives could be prosecuted. “Harassment not only includes in-person contact, but also contact via the Internet, social media and telephone,” he said.