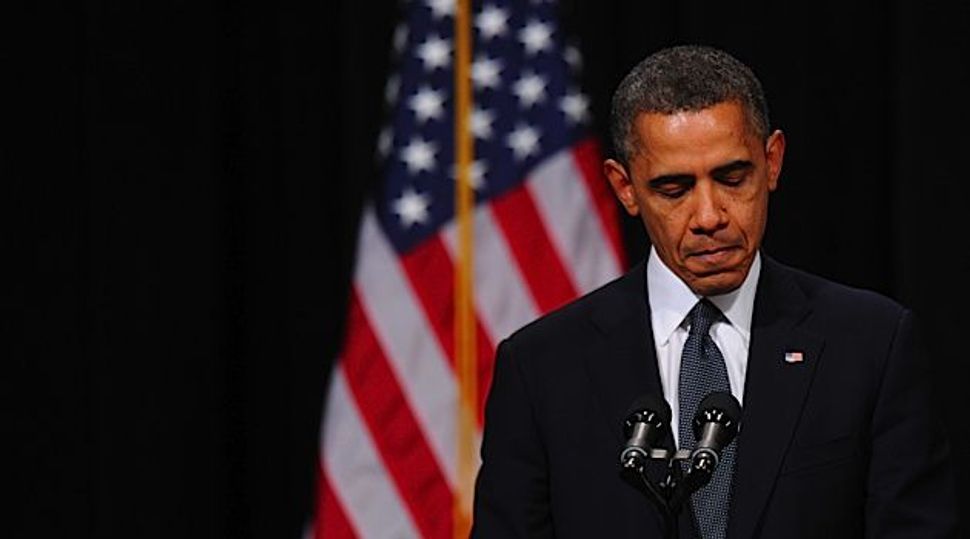 U.S. President Barack Obama on Sunday demanded changes in the way the country dealt with gun violence, though he avoided the use of the word “gun” itself in consoling the Connecticut town shattered by the massacre of 20 young schoolchildren.

Obama said the world would judge the nation by the way it cared for its children, and that Friday’s slaughter left that judgment wanting.

“Can we say that we’re truly doing enough to give all the children of this country the chance to live out their lives in happiness and with purpose? I’ve been reflecting on this in the last few days. And if we’re honest with ourselves the answer’s no,” Obama told a packed auditorium at Newtown High School at the end of a somber multi-faith service.

“We’re not doing enough and we will have to change.”

The emotional prayer vigil, which included a reading of Psalm 46 by local Rabbi Shaul Praver, capped a day when worshippers sought solace in houses of worship to mourn the victims of Sandy Hook Elementary School in Newtown, where a gunman used a military-style assault rifle to kill six adults and 20 first-graders before committing suicide.

A more detailed picture of Adam Lanza’s stunning attack emerged on Sunday. Police said he was armed with hundreds of bullets in high-capacity magazines of about 30 rounds each for the Bushmaster AR 15 rifle and two handguns he carried into the school. He had a fourth weapon, a shotgun, in his car outside.

All the dead children were either 6 or 7 years old, feeding more emotion into a revived debate about whether stricter gun laws could prevent future mass shootings in the United States.

Obama noted it was the fourth time in his presidency he had needed to console a community after such an attack, following the shootings in Tucson, Arizona in January, 2011; Aurora, Colorado in July; and Oak Creek, Wisconsin in August.

“Here in Newtown, I come to offer the love and prayers of the nation,” Obama said. “I am very mindful that mere words cannot match the depths of your sorrow, nor can they heal your wounded hearts.”

Obama, who on Friday wiped away tears as he addressed the nation following the killings, somberly spoke the first names of the 20 children. People in the audience wailed and cried out as they heard the names.

He said he would convene a meeting of law enforcers, parents, educators and others in an effort to prevent future tragedies, but he did not specifically call for tougher gun laws, mindful of the heated debate ahead on the issue.

PICTURE OF THE CRIME

While townspeople grieved, investigators examined forensic evidence and scoured the crime scene in a process likely to extend for weeks. Many more witnesses needed to be interviewed, possibly including children who survived the attack, state police Lieutenant Paul Vance said.

Connecticut Governor Dannel Malloy said the gunman shot his way through a school door “using several rounds” before beginning to kill adults and children inside, then killed himself as police closed in.

“This sick fellow, you know, clearly mentally ill, killed his mother, proceeded to go on and kill a great number of people,” Malloy added.

Townspeople and visitors took solace in church on Sunday. Mass at St. Rose Catholic church was packed. The priest’s announcements included news that the Christmas pageant rehearsal would go on as planned, but without 6-year-old Olivia Engel, killed on Friday before she could play the role of an angel.

Makeshift memorials appeared in this affluent town of 27,000 people about 80 miles (130 km) from New York City. The largest, festooned with flowers and teddy bears, sat at the end of Dickenson Drive where Sandy Hook Elementary stands.

As children walked down the street in the rain, carrying their toys and signs, a man sat on the back of his parked car playing a mournful tune on a violin to accompany them.

“This is a time to come together,” said Carina Bandhaver, 43, who lives in nearby Southbury.

The children who survived will not have to return to the scene of the massacre. They will attend classes at an unused school in a Connecticut town about 7 miles (11 km) away, school officials said. Classes elsewhere in the town will resume on Tuesday, except at Sandy Hook.

Several Democratic lawmakers called for a new push for U.S. gun restrictions on Sunday, including a ban on military-style assault weapons.

Senator Dianne Feinstein of California, the author of an assault-weapons ban that lapsed in 2004, said she would introduce new legislation this week.

Gun rights advocates have countered that Connecticut already has among the strictest gun laws in the nation.

Police were trying to establish the relationship between Adam Lanza, Nancy Lanza and the school, and whether the mother and her sons were frequent visitors to gun ranges, according to a law enforcement official briefed on the investigation.

In addition to the military-style Bushmaster assault rifle, a civilian version of the weapon used by U.S. forces in Afghanistan, police said Lanza carried Glock 10 mm and Sig Sauer 9 mm handguns into the school.

Nancy Lanza legally owned a Sig Sauer and a Glock, handguns commonly used by police, in addition to the long gun, according to law enforcement officials.

Lanza had struggled at times to fit into the community and his mother pulled him out of school for several years to home-school him, said Louise Tambascio, the owner of My Place Restaurant, where his mother was a long-time patron.