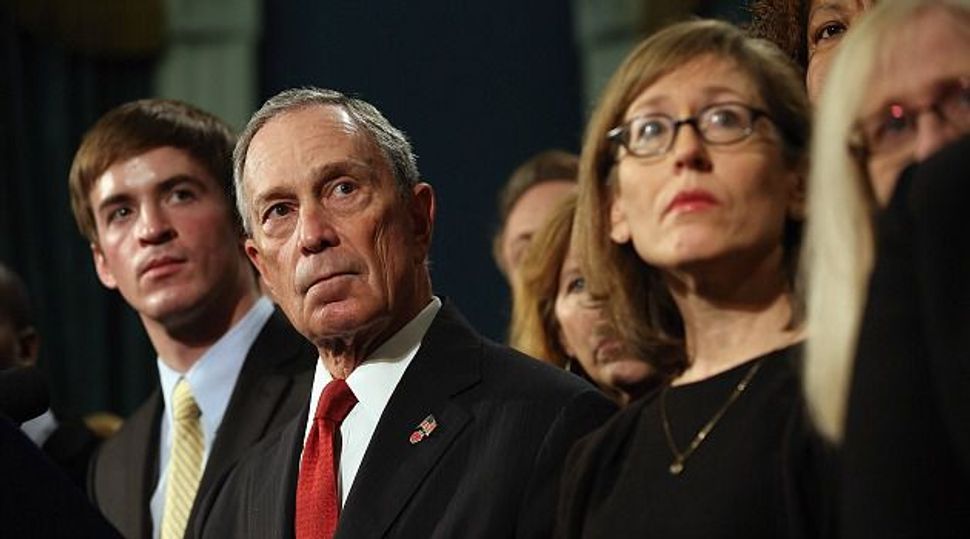 New York Mayor Michael Bloomberg joined loved ones of victims of shootings from Colorado to Virginia to blast lawmakers on Monday for being too cowed by the firearms lobby to pass gun control laws that could save lives.

At a City Hall press conference, Bloomberg described Friday’s mass shooting at a Connecticut elementary school as “no aberration,” and said it should make tightening gun laws the top priority of the president and Congress.

The move came amid signs that pro-gun lawmakers were rethinking their ironclad opposition to gun control measures after the Newtown massacre.

Rep. John Yarmuth (D-Kentucky), who is Jewish, said he has shifted his position on guns.

“I have been largely silent on the issue of gun violence over the past six years, and I am now as sorry for that as I am for what happened to the families who lost so much in this most recent, but sadly not isolated, tragedy,” Yarmuth said in a statement.

Bloomberg was joined by more than two dozen survivors and relatives of victims of mass shootings including the gun violence at a cinema in Aurora, Colorado, last July, at a 2011 public meeting held by Congresswoman Gabrielle Giffords in Tucson, and at Virginia Tech in 2007.

Any one of those earlier massacres should have been cause enough to tighten gun laws, he said.

“This is an outrage,” Bloomberg said, referring to the disproportionately high number of gun deaths in the U.S. compared to other developed nations. “We are killing each other, and we are the only industrialized nation doing it.”

Bloomberg is the co-chair of Mayors Against Illegal Guns, a coalition of more than 700 U.S. mayors advocating against gun violence.

He said the coalition was calling for Congress to require a criminal background check for all gun sales, closing what he said was an “enormous” loophole whereby private gun sales – whether online or at gun shows – do not require such checks.

He also called for Congress to ban “military-style” assault weapons and high-capacity magazines and to pass laws making gun trafficking a felony.

“It’s not a panacea,” he said of these measures, “it wouldn’t get rid of all the guns on the streets, but it would go a long way towards limiting them and limiting the number of people killed.”

Bloomberg also urged the president to fill the six-year-old vacancy at the head of the Bureau of Alcohol, Tobacco, Firearms and Explosives, which has been run by a series of acting directors since 2006.

He also criticized the U.S. Department of Justice for not prosecuting people who fail background checks due to fraudulent applications. In 2009, the department prosecuted only 77 out of the more than 71,000 such cases uncovered by the FBI, Bloomberg said.

Neither the ATF nor the Justice Department immediately responded to a request for comment on the mayor’s assertions.

New York’s billionaire mayor formed a super PAC this year, and suggested on Monday he would consider using those funds to counteract the lobbying of groups such as the National Rifle Association that typically oppose tighter gun laws.

“I’m going to do what I think is appropriate to try to impact the dialogue,” he said. “Shame on me if I don’t.”

Democratic gun-rights advocates joined the growing number of lawmakers in their party who have started to call for limits on assault weapons, a sign that the Connecticut school massacre could be the “tipping point” to revive the gun control debate in Washington,

Senator Joe Manchin of West Virginia and Virginia Senator Mark Warner, both Democrats who have earned top marks from the powerful National Rifle Association, said they would now be open to more regulation of military-style rifles like the one used to kill 20 young children and six adults on Friday.

U.S. lawmakers have not approved a major new federal gun law since 1994, and a ban on certain semi-automatic rifles known as assault weapons expired in 2004.

Senator Dianne Feinstein, a California Democrat who authored the previous ban, pledged to introduce legislation early next year to ban the weapons.

Previous attempts at toughening U.S. gun laws have failed amid opposition from the NRA and other gun-lobby groups – even after mass shootings across the country.

But the shift by moderate Democrats showed that the weapons lobby could face a tougher fight this time to ward off calls for more regulation. However, with Congress and President Barack Obama busy trying to resolve the “fiscal cliff” of tax and spending deadlines, even liberal Democrats acknowledge that any review of gun laws would not take place until 2013.

A hunter and member of the National Rifle Association, Manchin said the availability of such high-powered weapons does not make sense, and that he knew of no hunter who went out with assault rifles or clips with 30 rounds of ammunition.

“This awful massacre of our youngest children has changed us, and everything should be on the table,” said Manchin, who once ran a campaign ad in which he shot environmental legislation with a rifle.

“There’s got to be a way to put reasonable restrictions, particularly as we look at assault weapons, as we look at these fast clips of ammunition,” Warner, whose state is home to the NRA, told The Washington Post.

John Yarmuth, a Democratic U.S. representative from Kentucky, also shifted position. “I have been largely silent on the issue of gun violence over the past six years, and I am now as sorry for that as I am for what happened to the families who lost so much in this most recent, but sadly not isolated, tragedy,” he said in a statement.

There has been little word on assault weapons from Republicans, who are traditionally strong gun rights advocates, even in the wake of the Newtown deaths.

Kentucky’s Mitch McConnell, the Republican leader in the Senate, offered words of comfort, but did not mention weapons when he spoke on Monday in the Senate chamber, where a parade of Democratic senators called for greater gun control.

Representatives for the National Rifle Association did not respond to a request for comment. The lobby group has no statement on the school shooting on its website. It has not posted any comments on social media since Friday.

Obama called on Sunday for the country to change its approach to violence, although he did not use the word “gun.” The White House said on Monday gun control is part but not the entire answer to address the violence in the United States.

But the tide of national emotion over the deaths of so many children could make a difference this time.

“One of great strengths of the NRA has been its bipartisanship,” said Jeremy Mayer, a political scientist at George Mason University in Fairfax, Virginia. “Now it’s almost all Republicans and it will be harder for the NRA to deal with a bunch of united and angry Democrats.”

Police said 20-year-old Adam Lanza was armed with hundreds of bullets in high-capacity magazines of about 30 rounds each for the Bushmaster AR 15 rifle with which he mowed down the children and staff. He also carried two handguns and had a shotgun in a car.

Lanza killed his mother at home and himself at the school.

Lanza’s rampage was only the latest in a string of mass shootings nationwide. But those earlier incidents prompted little movement toward addressing the availability of weapons in the United States and the country’s relatively lax gun laws.

The Connecticut rampage prompted the largest-ever petition on a White House website that lets Americans pick issues they want on the national agenda. A petition seeking the introduction of gun legislation had attracted 148,085 signatures by Monday.

“There’s a deep interest in some action taking place,” U.S. Representative Sheila Jackson Lee, a Texas Democrat, told Reuters. She said she had heard from her district on the issue in person, by phone and through calls during a radio show.

A new Reuters/Ipsos poll on Monday found an 8-point increase in the percentage of Americans who agree that “gun ownership should have strong regulations or restrictions.”