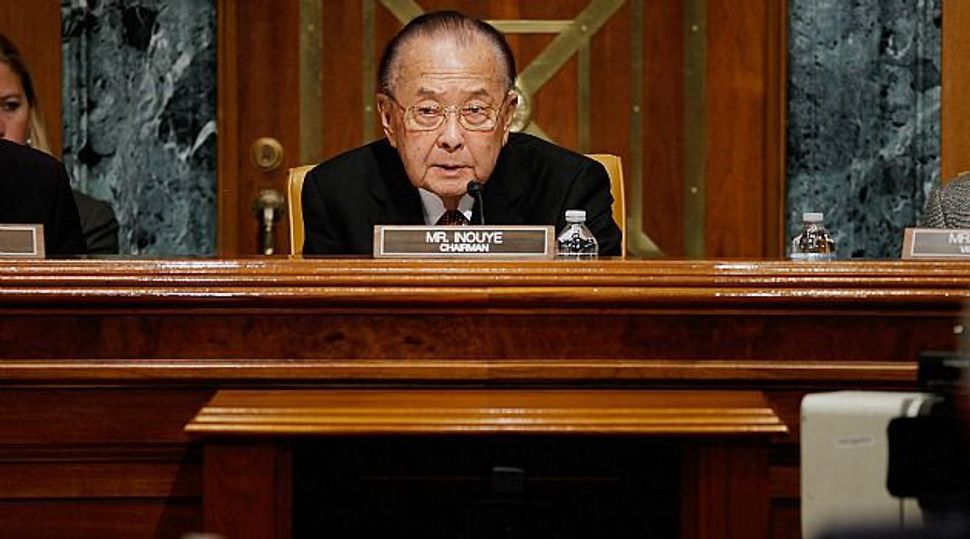 Friend of Israel: Sen. Daniel Inouye of Hawaii has died at 88. Image by getty images

Democratic Senator Daniel Inouye, a decorated World War Two veteran who lost an arm in battle and represented Hawaii in Congress since its statehood more than a half century ago, died on Monday at age 88.

Inouye, who was chairman of the powerful Senate Appropriations Committee and was known as a strong supporter of Israel, died of complications from a respiratory illness, his office said in a statement.

“Aloha” was the last word he spoke, the statement said.

The son of a Japanese immigrant father and a Hawaii-born mother whose parents came from Japan, Inouye and his family were declared “enemy aliens” by the U.S. government at the outbreak of World War Two. Inouye would later rise to become the highest-ranking elected Asian-American official in U.S. politics.

During a political career spanning seven decades, he gained national attention on the Senate Watergate Committee and as chairman of the Select Intelligence Committee during the 1970s.

He was also chairman of a special panel that investigated the Iran-Contra affair – involving secret U.S. support of anti-Communist Nicaraguan rebels with illegal sales of missiles to Iran – during Ronald Reagan’s presidency in the 1980s.

At the time, he criticized what he called a “shadowy government with … the ability to pursue its own ideas of the national interest, free from all checks and balances, and free from the law itself.”

“Senator Inouye deeply understood the importance of the U.S.-Israel relationship, and as chairman of the Appropriations Committee, worked tirelessly and effectively to ensure that America’s ally, Israel, had the necessary resources to defend her people,” the American Israel Public Affairs Committee said in a statement, JTA reported. “He will be missed by all who appreciated his many decades of leadership in strengthening the ties between America and Israel.”

His death, at the Walter Reed National Military Medical Center in suburban Maryland, was announced on the Senate floor by Majority Leader Harry Reid, who hailed Inouye as one of the “greats of this body.”

President Barack Obama saluted Inouye as a “true American hero” for his wartime service and his work on Capitol Hill to “strengthen our military, forge bipartisan consensus and hold those of us in government accountable to the people we were elected to serve.”

Under Hawaii law, Democratic Governor Neil Abercrombie will name a successor to fill Inouye’s seat until a new senator is picked in the 2014 general election.

Because Abercrombie is expected to name a fellow Democrat, Inouye’s death is unlikely to change the balance of power in the 100-member Senate, where Democrats were expected to maintain a 55-45 majority over Republicans.

First elected to Congress as Hawaii’s first full-fledged member of the U.S. House of Representatives, Inouye took office on Aug. 21, 1959, the date Hawaii became the 50th U.S. state. He went on to win election to the U.S. Senate in 1962.

After nine consecutive Senate terms, Inouye was the only member of the state’s original congressional delegation still serving on Capitol Hill.

He was also the second longest-serving member of the U.S. Senate after the late Senator Robert Byrd of West Virginia, and became the most senior member when Byrd died in 2010.

Inouye thus assumed the largely ceremonial post of president pro tempore of the Senate, making him third in line to succeed to the U.S. presidency after the vice president and speaker of the House.

Inouye began his public service at age 17, when he enlisted in the U.S. Army shortly after the 1941 Japanese attack on the American Pacific Fleet at Pearl Harbor, during which he had served as a U.S. medical volunteer.

Inouye was not sent to an internment camp as were many Americans of Japanese ancestry when the war started because Hawaii, then a U.S. territory, was placed under control of military authorities, he told National Public Radio last year.

But he was declared an “enemy alien,” and was among those who petitioned the government for the right to serve in the U.S. military to prove their allegiance. In late 1942, at age 17, he enlisted.

“I was angered to realize that my government thought that I was disloyal and part of the enemy, and I wanted to be able to demonstrate not only to my government but to my neighbors that I was a good American,” he said in an interview aired as part of Ken Burns’ 2007 documentary “The War.”

He joined the 442nd Regimental Combat Team, a unit of U.S. soldiers of Japanese ancestry. Serving in Europe with distinction, Inouye lost his right arm while charging a series of German machine-gun nests on a hill in Italy in 1945.

The injury earned him a Purple Heart and other awards but ended his ambitions to be a surgeon. Instead, he earned a law degree and entered politics after the war.

When asked in recent days how he wanted to be remembered, his office said Inouye replied, “I represented the people of Hawaii and this nation honestly and to the best of my ability. I think I did OK.”

Inouye’s death will propel Senator Patrick Leahy, a Vermont Democrat, to become president pro tempore of the Senate, as the member with the most seniority on the majority side, a Senate leadership aide said.

Leahy was also in line to become the chairman of the Senate Appropriations Committee, though he already chairs the Judiciary Committee and could not keep both posts without a waiver. If he did give up the gavel at Judiciary, that could open up the leadership of that committee to Senator Dianne Feinstein of California, a champion of gun control legislation.