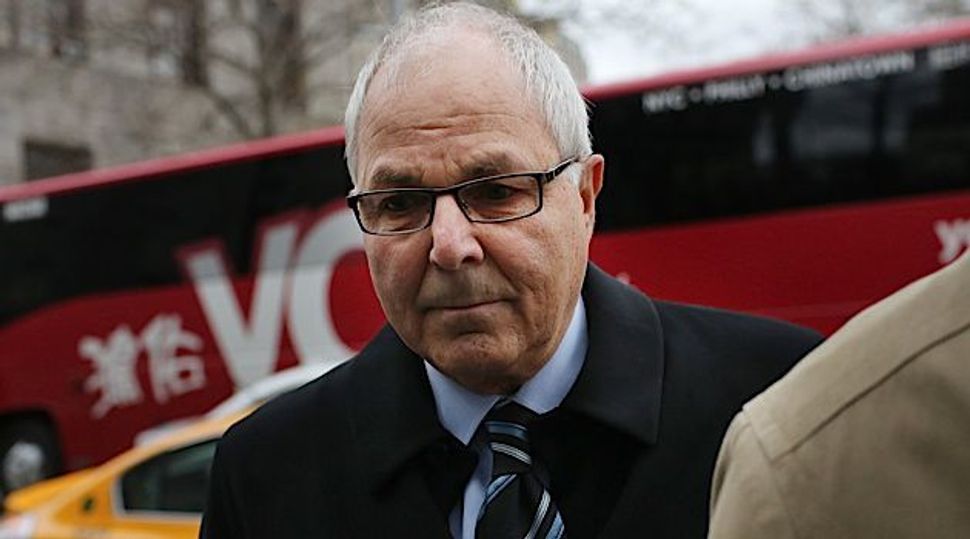 The younger brother of Bernard Madoff will serve 10 years in prison for his role in his brother’s Ponzi scheme that stole billions of dollars from investors, a U.S. judge said on Thursday.

Peter Madoff, 67, pleaded guilty in June to criminal charges including conspiracy to commit securities fraud for falsifying the books and records of the investment advisory company founded by his brother.

U.S. District Court Judge Laura Taylor Swain adopted prosecutors’ recommendations and sentenced Madoff to 10 years in prison. She also ordered him to forfeit what she called a “draconian” $143.1 billion, which she said would seal his “financial ruination.”

“To take his story at face value, he knew that the business operation was a little bit crooked, and he was content to go along with that,” Swain said. “We all know that a crooked operation is rarely if ever just a ‘little bit’ crooked.”

The judge said Madoff’s prison term would begin on Feb. 6 and said she would recommend he serve it at a federal prison in Otisville, New York. His lawyers had asked that he remain free until after his granddaughter’s Bat Mitzvah on Jan. 19. He was also sentenced to one year supervised release following prison.

“I am deeply ashamed of my conduct,” Peter Madoff said at the sentencing. “I accept full responsibility for my actions.”

Of 13 individuals charged criminally in connection with the fraud, Peter Madoff is the only one, other than his brother, who was a member of the Madoff family. Bernard Madoff, 74, was sentenced in 2009 to a 150-year prison term and was ordered to forfeit $170.8 billion.

With Madoff looking on, two victims of the Ponzi scheme urged the judge to show no leniency. Customers were defrauded out of about $20 billion in the Ponzi scheme, according to the trustee charged with recovering money for the victims.

“I ask that you show the same degree of compassion to Peter Madoff as he showed us: None,” said Michael DeVita, one of the victims.

Peter Madoff, a lawyer, had been chief compliance officer and a senior managing director at the firm, Bernard L. Madoff Investment Securities.

He said he didn’t know Bernard Madoff was operating the massive Ponzi scheme until shortly before his brother’s arrest in December 2008.

“Peter Madoff carried out his part of an epic fraud,” Lisa Baroni, a prosecutor, said. “He lied repeatedly to regulators and investors.”

Peter Madoff also transferred millions of dollars within the Madoff family to avoid tax payments to the Internal Revenue Service and also put his wife on the firm’s payroll in a no-show job.

In December 2008, as Bernard Madoff’s firm neared collapse, prosecutors said Peter Madoff also agreed to send $300 million remaining in its accounts to certain employees, family members and friends. Those funds were never dispersed, as the firm instead folded as Bernard Madoff was arrested.

Manhattan U.S. Attorney Preet Bharara in a statement called Peter Madoff a “gatekeeper,” who enabled the fraud instead of protecting against it.

“The decade he will spend in prison and the disgorgement of his assets are a just result,” Bharara said.

But Amy Luria, another victim whose grandmother had put Peter Madoff in charge of her estate, argued during the hearing that he should be sentenced for the roughly four decades that he worked for his brother’s firm.

“The option of Peter Madoff going to jail for just 10 years does not seem just,” she said.

The $143.1 billion the judge ordered Madoff to forfeit was the total investors paid into Bernard Madoff’s firm from 1996 to 2008, prosecutors said.

Among the assets being forfeited are all of his wife and daughter’s assets, several homes, a Ferrari and more than $10 million in cash and securities. His wife, Marion, was left with $771,733.

The Justice Department earlier this week filed a motion seeking a court order finding that restitution isn’t practical, allowing it to distribute the forfeited assets.

To date, the government has recovered more than $2.35 billion, the Justice Department said in a court filing Thursday.