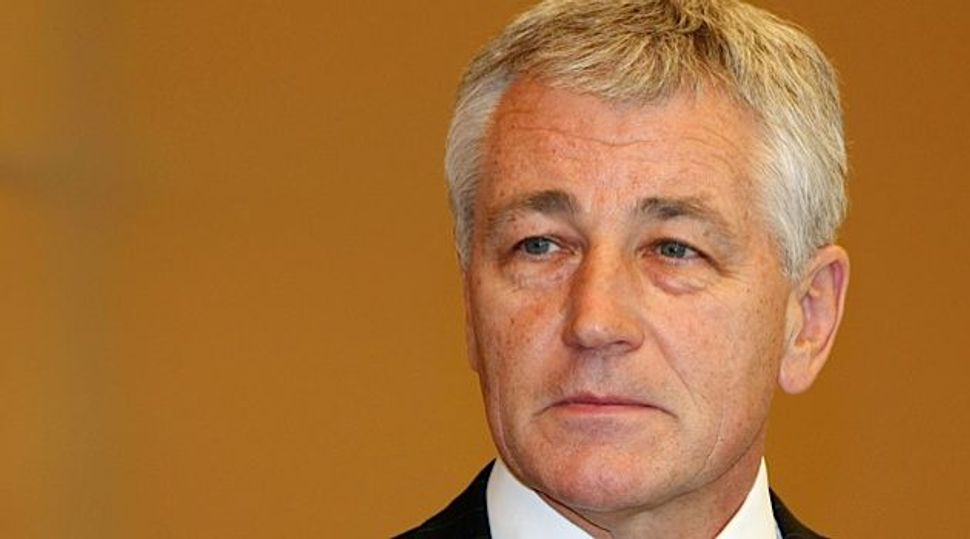 The White House on Thursday came to the defense of former Republican Senator Chuck Hagel against critics who have attacked his record on Israel and Iran in a bid to head off his possible nomination as President Barack Obama’s next Pentagon chief.

With Hagel considered a leading choice for defense secretary, the administration joined allies rallying to support him against the onslaught, led by some pro-Israel groups and neo-conservatives, but also including former colleagues on Capitol Hill.

It was the second time since Obama’s re-election last month that the White House has found itself forced to defend a Cabinet candidate who has yet to be nominated for anything, a source of frustration for the president’s advisers.

Obama’s aides have been preparing for a realignment of his national security team, possibly by Friday, sources familiar with the process have said. But with Obama focused on the “fiscal cliff” standoff and the Hagel controversy also fueling concerns, an announcement could easily be delayed.

Some American Jewish leaders contend Hagel, who left the Senate in 2008, at times opposed Israel’s interests, voting several times against U.S. sanctions on Iran, and made disparaging remarks about the influence of what he called a “Jewish lobby” in Washington.

White House spokesman Jay Carney made clear Obama’s faith in the former lawmaker, who is a decorated Vietnam war veteran.

“Senator Hagel fought and bled for his country. He served his country well. He was an excellent senator,” Carney said, without acknowledging that Hagel was under consideration to succeed Defense Secretary Leon Panetta. He did not address any of the specific criticisms aimed at Hagel.

The controversy over Hagel’s possible nomination comes after U.N. Ambassador Susan Rice withdrew from consideration for secretary of state last week amid withering attacks from Republicans over her role in initial explanations of the deadly September assault on the U.S. consulate in Benghazi, Libya.

“We’ve been through this before with Ambassador Rice where there’s an effort to go after somebody,” Carney said.

The drumbeat of criticism against Hagel could prompt Obama to reconsider whether it would be worth the likely Senate confirmation battle. But the White House has given no sign of dropping him the president’s short list.

Obama himself has been criticized by some Jewish leaders for his approach to close U.S. ally Israel, especially given his strained relations with Prime Minister Benjamin Netanyahu.

Some of the attacks on Hagel stem from comments he made to former U.S. diplomat Aaron David Miller for his 2008 book, “The Much Too Promised Land,” in which Hagel was quoted as saying, “The Jewish lobby intimidates a lot of people up here.”

Senator Lindsey Graham of South Carolina, a member of the Armed Services Committee, said earlier this week that Hagel would “have to answer for that comment” if he is nominated.

William Kristol of the conservative Weekly Standard wrote in a recent column that Hagel “has anti-Israel, pro-appeasement-of-Iran bona fides.”

Hagel’s supporters have started firing back, insisting he has shown himself supportive of Israel and tough on Iran.

“His views are strong, solid on American foreign policy. I’m amazed at the turnout of the neo-cons and so on,” Brent Scowcroft, national security adviser under President George H.W. Bush, told Reuters.

He was referring to the neo-conservatives, a loose group of right-wing foreign policy thinkers who gained ascendancy during the tenure of Obama’s Republican predecessor, George W. Bush.

And Jeremy Ben-Ami, president of J Street, a liberal American Jewish group, denounced what he said was a “smear campaign” against Hagel.

Florida Republican Senator Marco Rubio’s office said he also would have questions about Hagel’s record on Cuba, and raised the possibility of putting a hold on his nomination. Hagel has voiced doubts about the wisdom and effectiveness of maintaining the decades-old U.S. trade embargo on communist Cuba.

“Promoting democracy in Latin America is a priority for Senator Rubio, and he’s put holds on other administration nominees over the issue,” said Rubio spokesman Alex Conant.

“If President Obama were to nominate Senator Hagel for a cabinet position, I’m sure we would have questions about Cuba positions.” Rubio is Cuban-American.

Adding to the sense of battle lines drawn, Hagel’s critics and allies are circulating dueling fact-sheets on Capitol Hill.

Many Republicans consider Hagel suspect. He was an early dissenter on the Iraq war – an issue that helped Obama rise to prominence – and crossed the aisle to endorse the president in his successful re-election bid this year.

Since leaving the Senate after two terms, he has also been a vocal critic of his own party’s fiscal policies.

Obama is said to feel comfortable with Hagel. The two traveled together to the Middle East during the 2008 campaign. Hagel currently co-chairs Obama’s Intelligence Advisory Board.