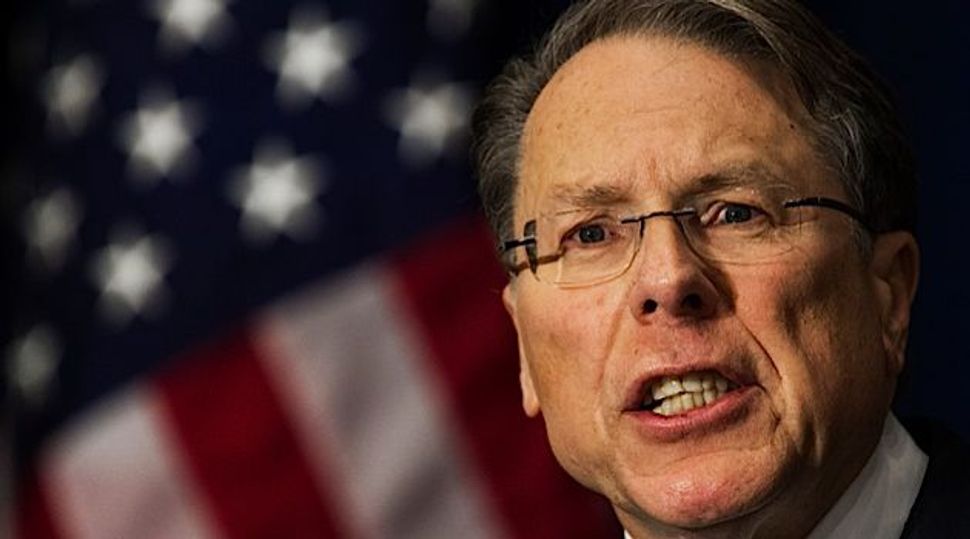 The powerful gun rights lobby went on the offensive on Friday arguing that schools should have armed guards, on a day that Americans remembered the victims of the Newtown, Connecticut school massacre with a moment of silence.

“The only thing that stops a bad guy with a gun is a good guy with a gun,” said Wayne LaPierre, chief executive of the National Rifle Association, noting that banks and airports are patrolled by armed guards, while schools typically are not.

His remarks – in which he charged that the news media and violent video games shared blame for the second-deadliest school shooting in U.S. history – were twice interrupted by protesters who unfurled signs and shouted “stop the killing.”

Speaking in Washington, LaPierre urged lawmakers to station armed police officers in all schools by the time students return from the Christmas break in January. LaPierre did not take questions from reporters.

Response from the Jewish community was swift and critical of LaPierre’s statements. “It was outrageous, I must say, even for them,” said Rabbi Julie Schonfeld, executive vice president of the Rabbinical Assembly. Schonfeld said the NRA’s statement contained a “total absence of any sense of the common good or moral responsibility.”

“Judaism is very clear in that you don’t provide weapons to people who are likely to harm you,” Schonfeld added.

New York City Mayor Michael Bloomberg issued a statement that said, “The NRA’s Washington leadership has long been out of step with its members, and never has that been so apparent as this morning. Their press conference was a shameful evasion of the crisis facing our country. Instead of offering solutions to a problem they have helped create, they offered a paranoid, dystopian vision of a more dangerous and violent America where everyone is armed and no place is safe.”

Congressman Jerrold Nadler called the NRA’s response to the Newtown shootings as, “both ludicrous and insulting,” and called the NRA “fundamentally out of step with the American people on the issue of gun violence.”

Rabbi David Saperstein, director of the Religious Action Center, also condemned the response and dismissed laying blame on violent video games as a root cause of increased violence. “Yes, there’s far too much violence in our entertainment, and it corrodes our children’s souls, and we have to change tha,t and religious communities can be helpful,” Saperstein said. “But in scores of other nations who see the same films, play the same video games, they don’t got take their mother’s legally acquired Bushmaster rifle and walk into schools and shoot people. The difference between those countries and ours is the availability of weapons.”

The blog, New Voices, printed an editorial this morning that called gun violence a Jewish issue and a student issue.

Earlier on Friday, church bells rang out in tree-lined suburban Newtown and up and down the East Coast at 9:30 a.m. EST (1430 GMT) in memory of the victims of the attack on Dec. 14 in which 28 people, including the gunman, were killed.

LaPierre’s comments came at the end of a week when President Barack Obama commissioned a new White House task force to find a way to quell violence, a challenge in a nation with a strong culture of individual gun ownership.

“We have to have a comprehensive way in which to respond to the mass murder of our children that we saw in Connecticut,” Vice President Joe Biden, who heads the task force, said on Thursday.

The U.S. Constitution guarantees the right to bear arms and hundreds of millions of weapons are in private hands.

About 11,100 Americans died in gun-related killings in 2011, not including suicides, according to preliminary data from the U.S. Centers for Disease Control and Prevention.

Some U.S. lawmakers called for swift passage of an assault weapons ban. Some Newtown residents have already launched an effort aimed at tightening rules on gun ownership.

“What I feel is a sense of guilt because I’ve been a strong advocate of gun control for years,” said John Dewees, 61, who was in downtown Newtown, where a makeshift memorial rose several feet around two Christmas trees with teddy bears and flower bouquets. “I wish I’d been more vocal. You wonder, had we all been, could we have averted this?”

The attack, which killed 20 first graders ages 6 and 7, shattered the illusion of safety in this close-knit town of 27,000 people where many residents knew someone affected by the attacks.

“There’s just so many connections,” said Jay Petrusaitis, whose son was in the same high school class as the gunman.

Churches as far south as Florida and at the National Cathedral in Washington, D.C., rang their bells.

Connecticut Governor Dannel Malloy had called for residents of his state to observe the moment of silence to mark a week since a 20-year-old gunman killed his mother and then stormed Sandy Hook Elementary School. He killed a total of 28 people that day, including six school teachers and staff in a rampage that ended when he turned his gun on himself.

Governors in Maine, Illinois, Michigan and several other states also called for moments of silence.

The gunman, Adam Lanza, used a military-style assault rifle and police said he carried hundreds of bullets in high-capacity magazines, as well as two handguns.

The weapons were legally purchased and registered to his mother, Nancy, his first victim.