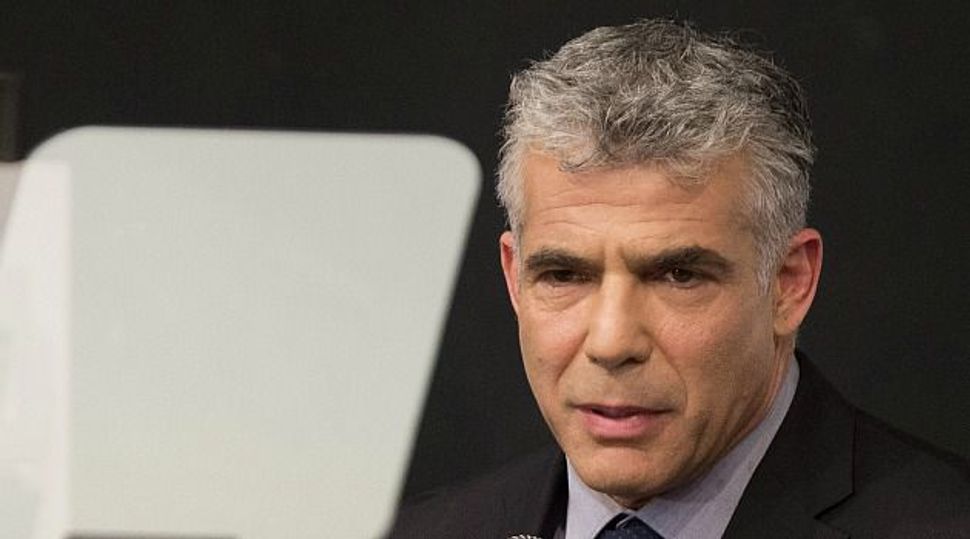 In a matter of months, Yair Lapid has turned from heartthrob television news anchor into a rising star of Israeli politics, leading a new centrist party into elections on Jan. 22.

Lapid, 49, may prove an attractive coalition partner for Prime Minister Benjamin Netanyahu’s right-wing Likud party, which is widely forecast to lead the next government.

Opinion polls show Lapid’s Yesh Atid party could win between six and nine seats in the 120-member parliament, a level which can earn coalition representation as Israeli governments invariably rely on small parties for a majority.

Lapid’s late father, Yosef, tried as a justice minister to curb the political power of ultra-Orthodox Jewish parties. Now the son is gaining popularity with younger voters by promising to relieve a housing shortage and abolish military draft exemptions for Jewish seminary students.

Interviewed at his Tel Aviv home, the former athlete spoke of a widening rift between Israel’s secular majority and a growing ultra-Orthodox minority. “I feel we’re at risk that a whole generation of young Israelis – who went to the army, work hard, pay taxes – one day will look around and say hey, this country is going nowhere,” he said.

About 60 percent of ultra-Orthodox men are engaged in full-time religious studies, keeping them out of the work force and burdening the Israeli economy. “I’m just going to tell them, listen, we have to change the deal. I’ve created this party as an attempt to become a game changer,” said Lapid.

Most Israeli men and women are called up for military service for up to three years when they turn 18. However, exceptions are made for most Arab citizens as well as ultra-Orthodox men and women.

With about three weeks to go before the national vote, Lapid’s party is neck-and-neck in the polls with another fledgling centrist faction, Hatenuah, established by former foreign minister Tzipi Livni.

Lapid said Livni’s refusal to merge their parties had further fragmented the centre-left camp. “It will hurt us both,” he said, noting they were competing for the same constituency.

Lapid, who anchored the news for an Israeli network after hosting a late-night TV show in the 1990s, quit television a year ago. He entered politics after a wave of protests over high living costs swept Israel in the summer of 2011.

Lapid stirred media attention last week with a bit of showmanship, drawing a red line through a cartoon depiction of a bomb listing power, water, petrol and housing price rises that have hit Israel’s middle class under the Netanyahu government.

This presentation mimicked Netanyahu’s own sketching of a red line through a cartoon bomb at the United Nations in September, when the Israeli leader said Iran was moving closer to the ability to produce a nuclear weapon.

“This place that was supposed to be this safe haven for Jews has become too oppressive, too stressed out, and too tense. So you know we can find ourselves with better lives in Miami, or in Montreal or London,” Lapid said.

Israeli social policies needed rebuilding. “I will be more than satisfied if I will have a share in this,” he added.

Acknowledging the possibility he would join a Netanyahu-led cabinet, Lapid said he would press the prime minister to renew peace talks with the Palestinians, though he sees little chance of reaching an agreement soon.

Lapid called it “irresponsible” to have had such a long hiatus in the talks, which collapsed in 2010 over the issue of Jewish settlement expansion in the occupied West Bank.

“What we’re doing is taking the most explosive conflict of our lives and just moving it to the next generation,” he said.

“I’m all for going back to the negotiation table, but this will never be a marriage, this will be a divorce,” said Lapid, who envisages Palestinian statehood in occupied land, and Israel removing some of the settlements it has built there.

But, Lapid added, Israelis “lost a lot of faith in the goodwill of Palestinians” after rocket fire from the Gaza Strip persisted following the pullout of Israeli soldiers and settlers in 2005 and Hamas Islamists opposed to Israel’s existence took control of the territory.