Chuck Hagel Would Be War Skeptic in Pentagon 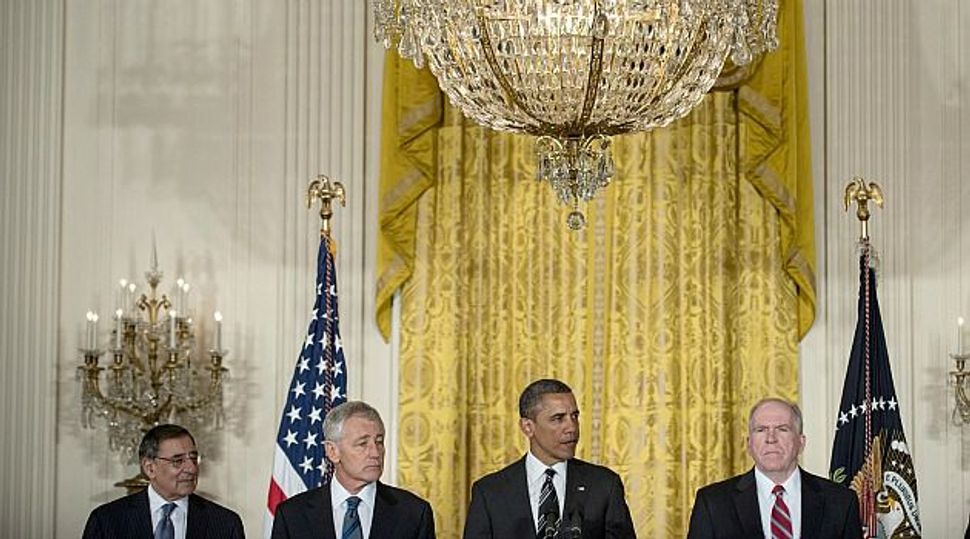 Skeptical Voice: Chuck Hagel says he has learned the costs of war firsthand, starting with his service in Vietnam. Image by getty images

A decorated Vietnam veteran acutely aware of the limits of military power, Chuck Hagel is likely to favor a sizable drawdown in Afghanistan, more frugal spending at the Pentagon and extreme caution when contemplating the use of force in places like Iran or Syria.

Obama’s decision to nominate Hagel – a Republican former senator who split with his party to oppose the Iraq war – as U.S. defense secretary came despite a public lobbying campaign against his candidacy in recent weeks by a host of critics, some of whom seized upon past remarks to argue he is anti-Israel.

Hagel’s supporters deny that, but are bracing for a tough confirmation battle in the Senate. Obama, as he announced the nomination, called Hagel the kind of leader U.S. forces deserve and pointed to his sacrifices in the Vietnam War, where he earned two Purple Hearts – the decoration for troops wounded in battle.

“Chuck knows that war is not an abstraction,” Obama said. “He understands that sending young Americans to fight and bleed in the dirt and mud, that’s something we only do when it’s absolutely necessary.”

Hagel, who would be the first Vietnam veteran to take the job, would succeed Defense Secretary Leon Panetta, 74, who is retiring from public life after a more than four-decade career in government that included leading the CIA during the covert raid to kill al Qaeda leader Osama bin Laden in 2011.

The blunt, 66-year-old Hagel will need to take over where Panetta leaves off, orchestrating a drawdown in U.S. forces in Afghanistan intended to bring the combat mission to a close by the end 2014. Hagel and Panetta were due to dine together on Monday night to discuss the transition.

The Afghan drawdown’s pace is an open question, as is the size of the residual force the United States will leave behind. Obama is again showing his readiness to veto the military brass, considering a lower range of options – keeping between 3,000 and 9,000 troops in Afghanistan – than his top commander in Afghanistan proposed, one U.S. official told Reuters.

Hagel has not yet commented on the matter, but Obama would likely not choose a Pentagon chief who fundamentally disagreed with him on that or other key issues.

Hagel, who fought alongside his own brother and suffered shrapnel wounds in Vietnam and burns to his face, has made no secret of his reservations about what the military can accomplish in Afghanistan.

“We can’t impose our will. The Russians found that out in Afghanistan. We’ve been involved in two very costly wars that have taught us a lesson once again,” Hagel told PBS’s “Tavis Smiley” show last year.

Unsurprisingly, he also is extremely cautious about what could be done in Syria. “I don’t think America wants to be in the lead on this,” he told Foreign Policy magazine in May.

‘THE GUY AT THE BOTTOM’

Hagel’s first-hand experience in war may win respect inside the Pentagon. He volunteered for the Vietnam War as an infantryman. He would become be the first defense secretary who started and ended his military career with an enlisted rank, as opposed to serving as an officer – an important distinction in wartime.

The enlisted ranks are “the ones who have the least say about where, when, and why we go to war, but bear the harshest consequences when we do,” Matt Pottinger, a veteran of the Iraq and Afghanistan wars and a former journalist, wrote in a piece on the “The Daily Beast” website applauding Hagel as a candidate to become defense chief.

Obama on Monday quoted Hagel saying: “My frame of reference … is geared towards the guy at the bottom who’s doing the fighting and the dying.”

Hagel’s comments on Middle East issues, including on Israel, are likely to complicate his Senate confirmation. House of Representatives Majority Leader Eric Cantor, a Virginia Republican, said in a statement on Monday he is “profoundly concerned and disappointed” by Hagel’s nomination.

Critics including Abraham Foxman of the Anti-Defamation League, a group devoted to fighting anti-Semitism, have raised questions about Hagel’s past comments, including one during a 2006 interview in which he was quoted as saying: “the Jewish lobby intimidates a lot of people up here.” Hagel also has faced criticism for urging direct talks with Iran.

Questions remain about Hagel’s approach to the defense budget.

Panetta has said the U.S. military would be hollowed out if $487 billion in planned spending reductions over the next decade are doubled – something that would happen if Obama and Congress fail to agree by the end of February on a way to avert automatic cuts due to kick in.

McAleese also named as being at risk of cuts or delays the Army’s planned Ground Combat Vehicle, the V-22 Osprey built by Boeing Co and Bell Helicopter, a unit of Textron Inc , and the Navy’s early work on developing a new ballistic missile submarine. McAleese said final decisions would be up to Congress, where such programs enjoy strong support.

Chuck Hagel Would Be War Skeptic in Pentagon