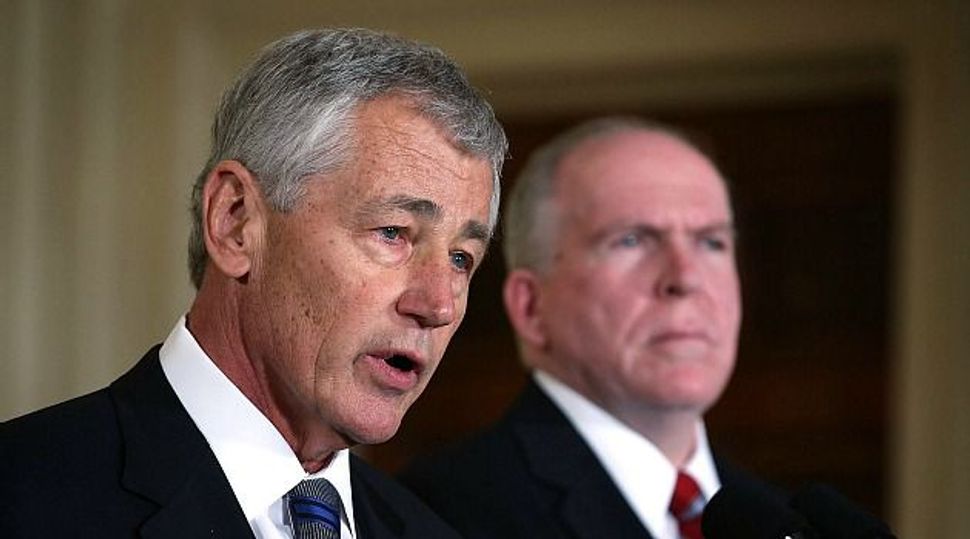 Chuck Hagel speaks at the White House after being nominated to be the next defense secretary. Image by getty images

The Israeli government kept clear on Tuesday of a brewing battle in Washington over U.S. President Barack Obama’s choice for defense secretary, Chuck Hagel, whose record on Iran and Israel is under scrutiny.

Prime Minister Benjamin Netanyahu and Defence Minister Ehud Barak offered no immediate comment on the pick, announced on Monday after being rumoured for weeks in which some pro-Israel figures pilloried the former Republican senator.

Parting with the rightist government’s reticence were two relatively junior officials, Civil Defence Minister Avi Dichter and Deputy Foreign Minister Danny Ayalon, neither of whom is expected to stay on after Israel’s national election on Jan. 22.

“There have already been nominations in the past which looked very troubling to us, and ultimately reality turned out totally differently, both for better and for worse,” Dichter told Israel Radio in an interview.

“Therefore I think we should be careful. We do not nominate people in agencies in other countries in general, and especially in the United States. So, as it is customary to say to those being nominated there: welcome.”

Netanyahu, who is favoured for reelection, has had a testy relationship with Obama, a Democrat who won a second term in November – though both insist their nations’ alliance is sound.

Israel, which receives around $3 billion a year in U.S. defence grants, has at times challenged the Obama administration by threatening preemptive war against the disputed Iranian nuclear programme while world powers pursue talks with Tehran.

Obama has also criticised the Netanyahu government’s settlement of occupied West Bank land, which the Palestinians blame for the two-year-old impasse in negotiations with Israel.

The pro-Netanyahu daily Israel Hayom quoted an unnamed government official on Tuesday as saying the choice of Hagel was “very bad news”, adding: “Clearly it won’t be easy with him.”

The official suggested having Hagel in the Pentagon would allow the president “to play ‘good cop’” with Netanyahu.

Many Republicans say Hagel, who left the Senate in 2008, at times opposed Israel’s interests. He voted repeatedly against U.S. sanctions on Iran and made disparaging remarks about the influence of what he called a “Jewish lobby” in Washington.

Hagel sought to beat back the bias allegations on Monday, telling the Lincoln Journal Star newspaper his record showed “unequivocal, total support for Israel” and that he had “said many times that Iran is a state sponsor of terrorism”.

“Furthering the peace process in the Middle East is in Israel’s interest,” added Hagel.

His statements appeared to be supported by Ayalon, a former envoy to the United States, who told Israel’s biggest-selling newspaper Yedioth Ahronoth: “I have met him many times, and he certainly regards Israel as a true and natural U.S. ally.”

Despite the criticisms of Hagel, the White House believes it can garner enough support for him on both sides of the political aisle to win confirmation in the Democrat-led Senate.

A decorated Vietnam war veteran, Hagel has criticised the size of the U.S. military, telling the Financial Times in 2011 that the Pentagon was “bloated” and needed “to be pared down”.

Hagel has also been attacked by gay rights groups for remarks in 1998 questioning whether an “openly aggressively gay” nominee could be an effective U.S. ambassador. He apologised for the comments last month, saying they were “insensitive”.

The American debate over Hagel has reached Israeli media, with one Yedioth columnist predicting the Pentagon pick would be Netanyahu’s “nightmare”. The prime minister delivered two speeches on Monday and Tuesday but made no reference to Hagel.

“In the United States, policy is made by the president, not by the members of the cabinet,” he told Reuters, noting that Ronald Reagan, a former president considered warm to Israel, had a less sympathetic defence secretary, Caspar Weinberger.