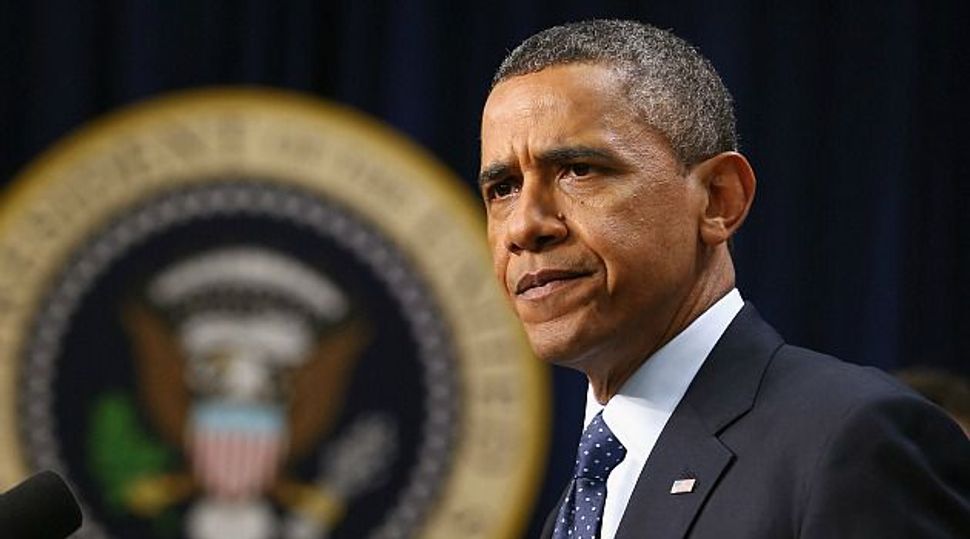 Just two weeks before his second inauguration, President Barack Obama is acting as if he believes he has a big mandate for his next term. The latest sign: his decision to defy a concerted campaign against his choice for defense secretary.

Obama also showed a “get-tough” strategy in his determination to pursue gun control after last month’s massacre of schoolchildren by a gunman in Newtown, Connecticut.

The actions reflect the growing confidence of a president who, without the need ever to seek re-election, now feels freer to stand up to a new Congress. His first term was marked by complaints from his liberal base that he had been too conciliatory toward Republicans.

Some critics say Obama now runs the risk of overreaching when he should instead be building Republican bridges to resolve the next looming budget confrontation.

Obama’s latest assertive move came on Monday when he nominated Chuck Hagel as defense secretary, setting up a Senate confirmation battle with critics who have attacked the former Republican senator’s record on Israel and Iran.

Obama’s refusal to bow to Hagel’s opponents, including pro-Israel groups, neoconservatives figures and some of Hagel’s own Republican colleagues, signaled that the president would not allow a top Cabinet candidate to be derailed again.

Susan Rice, Obama’s U.S. ambassador to the United Nations, dropped out of consideration for secretary of state last month after taking heavy criticism from some Republican lawmakers over her account of the September attack on the U.S. diplomatic mission in Benghazi, Libya that killed the American ambassador.

With word of Hagel’s impending selection circulating over the weekend, Republican Senator Lindsey Graham – one of Rice’s critics – called it an “in-your-face” nomination by Obama.

A former Obama aide, speaking on condition of anonymity, said this was an opportunity to lay down a clear second-term marker – “no more Mr. Nice Guy, no more pushovers” – as a message to political friends and foes alike.

“This is clearly a president who feels somewhat unencumbered by electoral politics, thinks he has political capital to spend, and is not wasting any time about it,” said Costas Panagopoulos, a political scientist at Fordham University in New York.

The White House is confident that Hagel can weather the storm and win confirmation in the Democratic-led Senate – presidential picks for senior security posts are rarely denied.

But Republican strategist John Feehery said Obama was taking a gamble that could backfire, especially in light of resistance from some of the president’s fellow Democrats to Hagel, a maverick moderate Republican. He bonded with Obama in the Senate over their mutual opposition to the Iraq war.

“The president is betting a big percentage of his chips,” Feehery said. “Presidents do tend to over-read their mandates sometimes. The question is whether that’s the case now.”

The agreement handed a victory to Obama, who had promised before the election to address budget woes in part by raising taxes on the wealthiest Americans. His Republican antagonists were forced to vote against a core tenet of their anti-tax conservative faith.

Obama and Congress must agree by the end of March on increasing the $16.4 trillion U.S. debt ceiling, the fate of $85 billion in delayed automatic spending cuts and passage of a bill to fund the government after a temporary measure expires.

Obama has vowed not to negotiate over the debt ceiling, demanding that Congress raise it without drama. His aides have made clear they believe the U.S. public would blame Republicans – not Obama – if the nation is forced into a debt default that he has said would be “catastrophic” for the world economy.

“This is overreach – hubris – for sure,” Alabama Senator Jeff Sessions, the top Republican on the Senate Budget Committee, said of Obama’s refusal to negotiate.

Obama’s tough talk on the next round of fiscal hurdles could also limit his ability to push forward on other legislative priorities such as immigration reform and gun control.

The shooting rampage at a Connecticut elementary school put gun control high on Obama’s second-term agenda. He appears to be determined to take advantage of a public backlash against gun violence.

The White House is weighing a far broader approach than just reinstating a ban on assault weapons and high-capacity magazines, the Washington Post reported on Sunday.

A working group led by Vice President Joe Biden is seriously considering measures that would require universal background checks for gun buyers and track the movement and sale of weapons through a national database, the newspaper said.

Obama promised in an end-of-year interview with NBC to put his “full weight” behind a package of gun control measures this year, and he signaled a willingness to take on the National Rifle Association gun lobby despite the political risks.

Obama is also calculating that he may finally be able to make good on his promise to achieve comprehensive immigration reform. He hopes to capitalize on sentiment within the Republican Party that it must reach out to Latinos who voted heavily for Obama after tough comments on illegal immigration by Republicans.

Obama also is showing signs he will take a hard line on issues of war and peace. He meets Afghan President Hamid Karzai at the White House this week and is expected to press for immunity from prosecution as a condition for allowing even a relatively small contingent of U.S. troops to stay behind in Afghanistan after the 2014 drawdown.