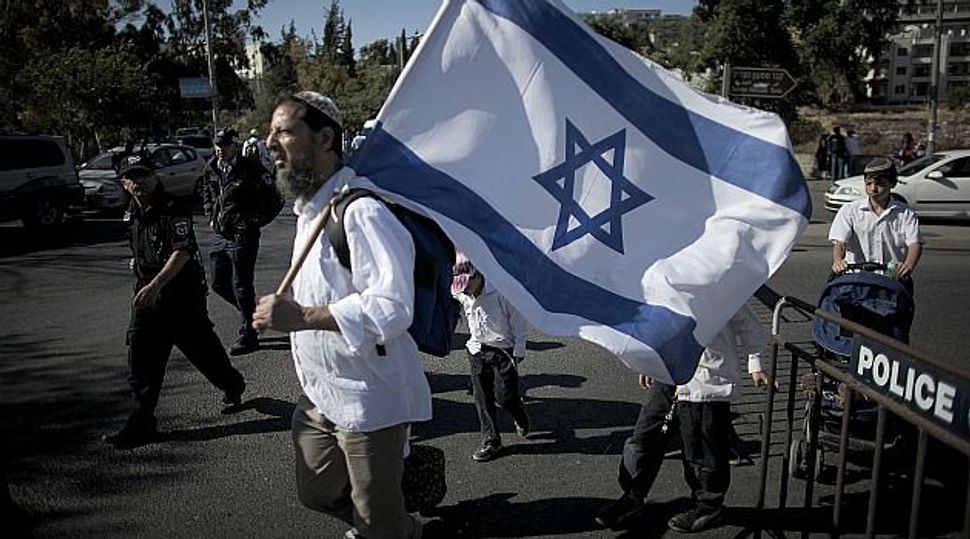 Right On: Jewish settlers are gleefully watching as Israel lurches to the right in the coming election. They see it as a sign that peace with the Palestinians isn?t coming anytime soon. Image by getty images

Entrenched in what they view as their Biblical heartland, the hardline Jewish settlers of Hebron look forward with delight to next week’s Israeli election.

Opinion polls forecast Prime Minister Benjamin Netanyahu, already at odds with the world over Jewish settlement in the occupied West Bank, will easily win a third term in office, with coalition partners who could push him further to the right.

The pro-settler Bayit Yehudi, a natural ally of Netanyahu’s right-wing Likud party, is forecast to be the third largest faction in parliament. Two Bayit Yehudi candidates – Hebron settlers – have a real chance of winning legislative seats.

“It is clear that the people of Israel want a national government, a Jewish government that wants the land of Israel with Judea and Samaria,” she said, using the Biblical name for the West Bank.

Hebron, divided by a 1997 interim peace deal, is home to 200,000 Palestinians and 800 Jews, who live in a closely-guarded enclave and are among the most ideologically driven of the 500,000 settlers on land Palestinians want for a state.

Settlement projects on land Israel captured in the 1967 Arab-Israeli War are considered illegal by most world powers, which frequently criticise them as an obstacle to peace.

Settler Haim Bleicher, 30, said Israelis no longer believe there is a chance for peace with the Palestinians.

“There is a sobering-up from the illusion of peace agreements and there is more faith among the people, who believe more and are getting closer to the Torah, to the Bible,” said Bleicher, who has lived in Hebron all his life.’

“This change finds its expression in politics too,” he said as the Muslim call to prayer carried over the valley from a nearby mosque.

Few Israelis doubt that Netanyahu will win the Jan. 22 election. Polls show Likud, merged with former Foreign Minister Avigdor Lieberman’s Yisrael Beitenu, is set to be the biggest party with about 34 of parliament’s 120 seats.

That should be enough for Netanyahu to put together a right-wing coalition bloc to govern the country.

He has already announced settlement expansion plans that include, for the first time, construction in the E1 area near Jerusalem that could split the West Bank and further dim prospects for a two-state solution to the Israeli-Palestinian conflict.

“The people of Israel are marching with a clear, definite majority toward a wide land, a right-wing state with a Jewish, national, character and we believe that this is the beginning of the complete redemption,” Cohen said. “This gives us resolve in facing our enemies.”

Just two months ago, pro-settler hardliners swept the primaries in an internal Likud vote that tossed out some of Netanyahu’s closest allies, seen by some party members as lagging in their support of settlements.

One Likud candidate likely to win a Knesset seat is Moshe Feiglin, a far-right settler who has twice challenged Netanyahu for leadership of the party and is now number 23 on its list of parliamentary candidates.

Speaking at a conference in Jerusalem this month, Feiglin advocated Israeli annexation of the West Bank and provision of financial inducements to encourage Palestinians to leave.

“Every Arab family in Judea and Samaria can be given an incentive of half a million dollars to encourage their emigration to a place where they will find a better future,” Feiglin said, adding that it was the only “real solution”.

The conference was organised by settler leaders and attended by hundreds. Three other Likud lawmakers, including one Likud minister, called there for application of Israeli sovereignty over the West Bank, home to 2.5 million Palestinians who exercise limited self-rule in some of the territory.

Such a plan is advocated by Naftali Bennett, head of Bayit Yehudi and a natural ally of Netanyahu. He calls for the eventual annexation of more than half of the West Bank and says a Palestinian state would be “suicide” for Israel.

Since winning his party’s leadership in November, Bennett has shot to campaign stardom. The high-tech millionaire has revamped Bayit Yehudi with fresh, new faces calling for peace and unity within Israel’s ethnically-fraught society.

But Israeli critics of Bennett says his party list includes some very hawkish candidates. Bennett cites security concerns for annexation of the West Bank. Others in his party look to the Jewish scriptures.

“This land was given to us by God,” Rabbi Eli Ben-Dahan, number four on the Bayit Yehudi roster, said at the settler conference in Jerusalem. “We have no right to forgo one grain of this land.”

Many Hebron settlers see themselves as pioneers, carrying the torch for Jews who inhabited the city on and off for centuries, at times banished by conquerors. The community was driven out by the killing of 67 Jews by Arabs in 1929.

In more recent times, Hebron has been a flashpoint for Israeli-Palestinian violence, notably the killing by a Jewish settler of 29 Muslims praying in a site holy to both religions in 1994. Its entrance has since been divided.

Through narrow alleyways manned by Israeli soldiers, buses unload tourists at the Tomb of the Patriarchs, burial site of Jewish forefathers Abraham, Isaac and Jacob and their wives.

For Muslims, who built the Ibrahimi mosque there, the three are seen as prophets in their religious tradition.

Although Hebron has largely been quiet for years, settlers and Palestinians make no secret of their mutual enmity.

“The Jewish people are not bad people,” said a Palestinian merchant, who did not want to give his name. “But the settlers are,” he said, rolling his eyes in exasperation.

Bleicher said Israel’s shift to the right will embolden Netanyahu in the face of international pressure.

“He is not a sole ruler, ultimately it is up to which way the wind is blowing among the people and once the people and the Knesset emanate power, Benjamin Netanyahu will tune himself to that and find the strength,” Bleicher said.

Settlers in Hebron felt betrayed by Netanyahu in his first term in office, when his government handed over 80 percent of the city to Palestinian rule in 1997.

In 2009 he kicked off his second term by announcing he embraced a two-state solution and by freezing all settlement construction for 10 months. Peace talks between Israel and the Palestinians broke down in 2010 when the freeze ended.

Though Netanyahu has since come under strong international condemnation for his government’s subsequent expansion of settlements, people here still hold a grudge against him.

“Bibi made all the possible mistakes in regard to Hebron,” Cohen said, using Netanyahu’s childhood nickname. “I suppose he says everything he does because he is not strong enough.”

David Wilder, a spokesman for the Jewish Community of Hebron, said he was concerned Netanyahu could opt against a right-wing coalition.

“It is very difficult to know where Netanyahu will go. We hope and expect, because there are many people in the Likud who are very strongly right-wing, that he will form a right-wing coalition, but I won’t believe it until I see it,” Wilder said.

“We have to offer peace for peace, there is no reason to offer land for peace,” he added. “We can live with anybody under the condition that they don’t try to kill us and they are willing to live peacefully within the framework of the state of Israel.”