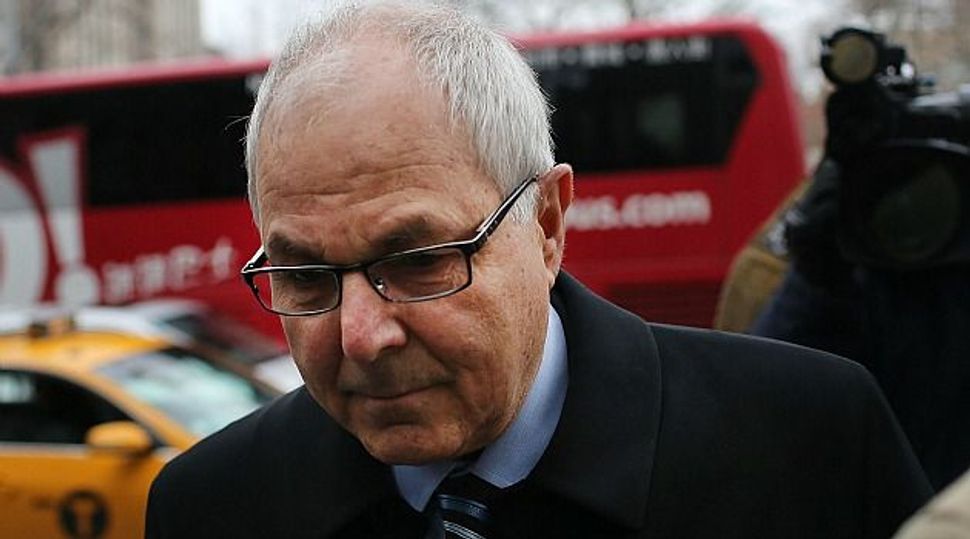 Bat Mitzvah Break: Peter Madoff arrives in court for sentencing on fraud charges. A judge threw the book at Bernie Madoff?s brother, but allowed him to delay reporting to prison until after his granddaughter?s bat mitzvah. Image by getty images

Bernie Madoff’s brother Peter Madoff is headed to prison for his role in the notorious billion-dollar Ponzi scam.

But not before reportedly attending his granddaughter’s super-luxe bat mitzvah.

A judge hit Peter Madoff, 67, with a 10-year sentence. But after received pleas from family and clergy, the jurist allowed the disgraced Madoff brother to report to prison on Feb. 6, the New York Post reported.

That allowed him to attend the coming of age event for his grandaughter, Rebecca Skoller.

It’s no run-of-the-mill bat mitzvah either. The celebration started with a ceremony at Manhattan’s famed Central Synagogue . It continues with a party at the swank 404 NYC, where the paper said shindigs can run up to six figures.

Peter Madoff was the chief compliance officer at Madoff’s firm, and worked for Bernie Madoff for 40 years. He made $4 million a year from 1998 to 2008 alone.

The brother, who was convicted of securities fraud, claimed to know nothing about the scam, and told a judge he was . “deeply ashamed and sorry.”

Federal District Judge Laura Swain threw the book at Peter Madoff, saying his claim of being in the dark was “frankly, not believable.”