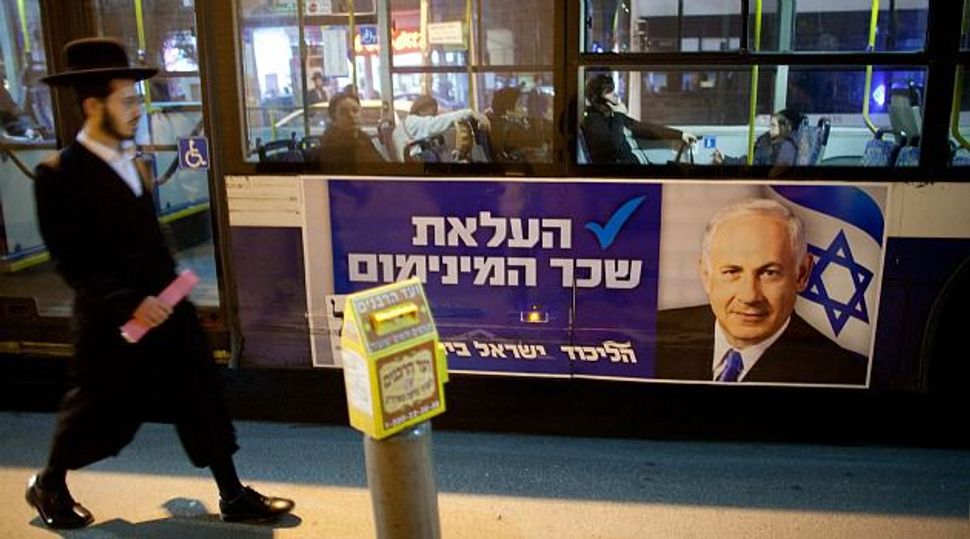 Vote for Right: The Israeli election is set to push the country further to the right, away from peace and towards confrontation with Iran. Image by getty images

Israelis look set to elect Prime Minister Benjamin Netanyahu to a third term with a smaller majority on Tuesday, pushing the Jewish State even further to the right, away from peace with Palestinians and towards a showdown with Iran.

Netanyahu has vowed to pursue the Jewish settlement of lands seized during the 1967 Middle East war if he stays in power, a policy that would put him at odds with Washington and deepened Israel’s international isolation.

Polls predict Netanyahu’s Likud party, which has forged an electoral pact with the ultra-nationalist Yisrael Beitenu group, will take the most seats in the parliamentary election.

But no Israeli party has ever secured an absolute majority, meaning that Netanyahu, who says that dealing with Iran’s nuclear ambitions is his top priority, will have to bring various allies onboard to control the 120-seat Knesset.

The former commando has traditionally looked to religious, conservative parties for backing and is widely expected to reach out to the surprise star of the campaign, self-made millionaire Naftali Bennett who heads the far-right Jewish Home party.

Bennett’s youthful dynamism has struck a chord among voters, most of whom no longer believe in the possibility of a Middle East peace deal, and has eroded Netanyahu’s right-wing support base. Surveys suggest he may take as many as 14 seats, many at the expense of Likud-Beitenu, projected to win 32.

Portraying himself as a natural partner for the prime minister, Bennett has alarmed those who want to see an independent Palestinian state created alongside Israel, by calling for the annexation of chunks of the occupied West Bank.

“I pray to God to give me the power to unite all of Israel and to restore Israel’s Jewish soul,” Bennett said on Monday at a final campaign appearance before Jerusalem’s Western Wall – the most important prayer site in Judaism.

However, some political analysts have speculated that Netanyahu might seek to project a more moderate image for Israel on the world stage and look to share power with centrist parties, such as Yesh Atid (There is a Future) – a newly formed group led by former TV host Yair Lapid.

Israel’s main opposition party, Labour, which is seen capturing up to 17 seats, has already ruled out a repeat of 2009, when it initially entered Netanyahu’s cabinet, promising to promote peace negotiations with the Palestinians.

U.S.-brokered talks collapsed just a month after they started in 2010 following a row over settlement building, and have laid in ruins ever since. Netanyahu blamed the Palestinians for the failure and says his door remains open to discussions.

Palestinian President Mahmoud Abbas says he won’t return to the table unless there is a halt to settlement construction.

That looks unlikely, with Netanyahu approving some 11,000 settler homes in December alone, causing further strains to his already notoriously difficult relations with U.S. President Barack Obama, who was sworn into a second term on Monday.

Netanyahu has said the turbulence – which has brought Islamist governments to power in several countries long ruled by secularist autocrats, including neighbouring Egypt – shows the importance of strengthening national security.

If he wins on Tuesday, he will almost certainly put Iran back to the top of the global agenda. Netanyahu has said he will not let Tehran enrich enough uranium to make a single nuclear bomb – a threshold Israeli experts say could arrive as early as mid-2013.