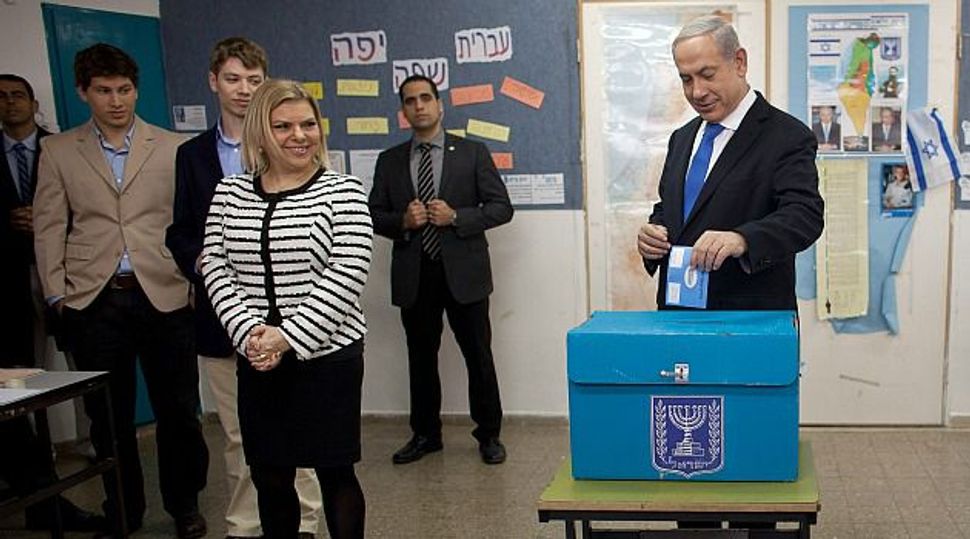 Early and Often: Benjamin Netanyahu casts his ballot as Israel goes to the polls in an election he is expected to win. Image by getty images

Israelis voted on Tuesday in an election that is expected to see Prime Minister Benjamin Netanyahu win a third term in office, pushing the Jewish state further to the right, away from peace with the Palestinians and towards a showdown with Iran.

However, Netanyahu’s own Likud party, running alongside the ultra-nationalist Yisrael Beitenu group, looks set to have fewer seats than in the previous parliament, with opinion polls showing a surge in support for the far-right Jewish Home party.

Political sources said Netanyahu, concerned by his apparent fall in popularity, might approach centre-left parties after the vote in an effort to broaden his coalition and present a more moderate face to Washington and other concerned allies.

“We want Israel to succeed, we vote Likud-Beitenu … The bigger it is, the more Israel will succeed,” Netanyahu said after casting his ballot alongside his wife and two sons.

Some 5.66 million Israelis are eligible to vote, with polling stations closing at 10 p.m. (2000 GMT). Full results are due by Wednesday morning, opening the way for coalition talks that could take several weeks.

The lacklustre election campaign failed to focus on any single issue and with a Netanyahu victory predicted by every opinion poll, the two main political blocs seemed to spend more time on internal feuding than confronting each other.

“There is a king sitting on the throne in Israel and I wanted to dethrone him, but it looks like that won’t happen,” said Yehudit Shimshi, a retired teacher voting in central Israel, on a bright, hot mid-winter morning.

No Israeli party has ever secured an absolute majority, meaning that Netanyahu, who says that dealing with Iran’s nuclear ambitions is his top priority, will have to bring various allies onboard to control the 120-seat Knesset.

The former commando has traditionally looked to religious, conservative parties for backing and is widely expected to seek out the surprise star of the campaign, self-made millionaire Naftali Bennett who heads the Jewish Home party.

Bennett has ruled out any peace pact with the Palestinians and calls for the annexation of much of the occupied West Bank.

His youthful dynamism has struck a chord amongst Israelis, most of whom no longer believe in the possibility of a Palestinian deal, and has eroded Netanyahu’s support base.

The Likud has also shifted further right in recent months, with hardline candidates who reject the so-called two-state solution, dominating the top of the party list.

Surveys suggest Bennett may take up to 14 seats, many at the expense of Likud-Beitenu, which was projected to win 32 in the last round of opinion polls published on Friday – 10 less than the two parties won in 2009 when they ran separate lists.

“Even if there are more trendy parties, there is one party that has a proven record,” he said on Tuesday.

Amongst the new parties standing for the first time in an election were Yesh Atid (There is a Future), a centrist group led by former television host Yair Lapid, seen winning 13 seats.

“All our lives we voted Likud, but today we voted for Lapid because we want a different coalition,” said Ahuva Heled, 55, a retired teacher voting with her husband north of Tel Aviv.

Lapid has not ruled out joining a Netanyahu cabinet, but is pushing hard for ultra-Orthodox Jews to do military service – a demand fiercely rejected by some allies of the prime minister.

Israel’s main opposition party, Labour, which is seen capturing up to 17 seats, has already ruled out a repeat of 2009, when it initially hooked up with Netanyahu, promising to promote peace negotiations with the Palestinians.

U.S.-brokered talks collapsed just a month after they started in 2010 following a row over settlement building, and have laid in ruins ever since. Netanyahu blamed the Palestinians for the failure and says his door remains open to discussions.

Palestinian President Mahmoud Abbas says he won’t return to the table unless there is a halt to settlement construction.

That looks unlikely, with Netanyahu approving some 11,000 settler homes in December alone, causing further strains to his already notoriously difficult relations with U.S. President Barack Obama, who was sworn in for a second term on Monday.

Netanyahu has said the turbulence – which has brought Islamist governments to power in several countries long ruled by secularist autocrats, including neighbouring Egypt – shows the importance of strengthening national security.

If he wins on Tuesday, he will seek to put Iran back to the top of the global agenda. Netanyahu has said he will not let Tehran enrich enough uranium to make a single nuclear bomb – a threshold Israeli experts say could arrive as early as mid-2013.