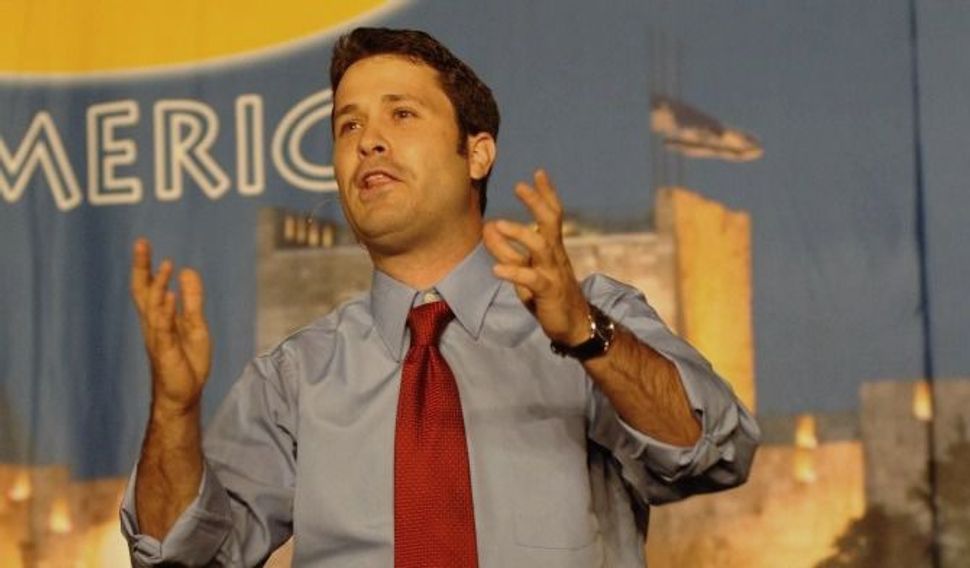 Jeremy Gimpel was caught on tape saying that the Islamic holy site the Dome of the Rock should be “blown up.” Image by jeremy gimpel campaign

In rare criticism of an Israeli politician, the Anti-Defamation League called on Knesset candidate Jeremy Gimpel to apologize to Muslims for suggesting blowing up the Dome of the Rock mosque.

Gimpel, an ordained rabbi, is a dual U.S.-Israeli citizen. If elected to the Knesset he would be required to give up his U.S. citizenship.

Gimpel, who is 14th on the candidate’s list for the Jewish Home Party and could be voted into the Knesset in Tuesday’s elections, was shown Jan. 18 on Channel 2’s nightly newscast in a video of a speech before a Christian group speculating on the mosque located on the Temple Mount being blown up.

“Imagine today if the golden dome, I’m being recorded so I can’t say blown up, but let’s say it was blown up, right, and we laid the cornerstone of the Temple in Jerusalem,” Gimpel said in the clip filmed several years ago. “Can you imagine what would be? None of you would be here. You would be going to Israel. It would be incredible.”

Gimpel has explained that the clip was from a speech he delivered to a Christian group and that his words were taken out of context.

“Although Mr. Gimpel has now retracted the statement, saying he ‘opposes’ the idea of destroying Al Aksa mosque and that ‘it was a joke,’ we are appalled by the notion that an Israeli rabbi, no less one seeking elective office in Israel, would suggest an act of terrorism as a legitimate means of achieving a religious objective. Terrorism is no joke and expressions of violent aggression in the name of Judaism or any religion are never justified,” the ADL Israel office said in a statement.

“His original comment and his recent outrageous explanation for it call into serious question his qualifications to represent the people of Israel in the Knesset. Mr. Gimpel should apologize for his gross insensitivity to the Muslim religion,” the statement, which also pointed out that the al Aksa mosque is a holy site for all Muslins, concluded.

Hatnua, the new center-left party led by Tzipi Livni, said that Gimpel’s speech contained sedition and incitement, and that he should be disqualified from running in Tuesday’s elections.

Meanwhile, Arab-Israeli lawmaker Ahmad Tibi filed a complaint with the Israel Police against Gimpel for his remarks. “His statements sow dissension and are an incitement to violence, and steps should be taken against him,” Tibi said.