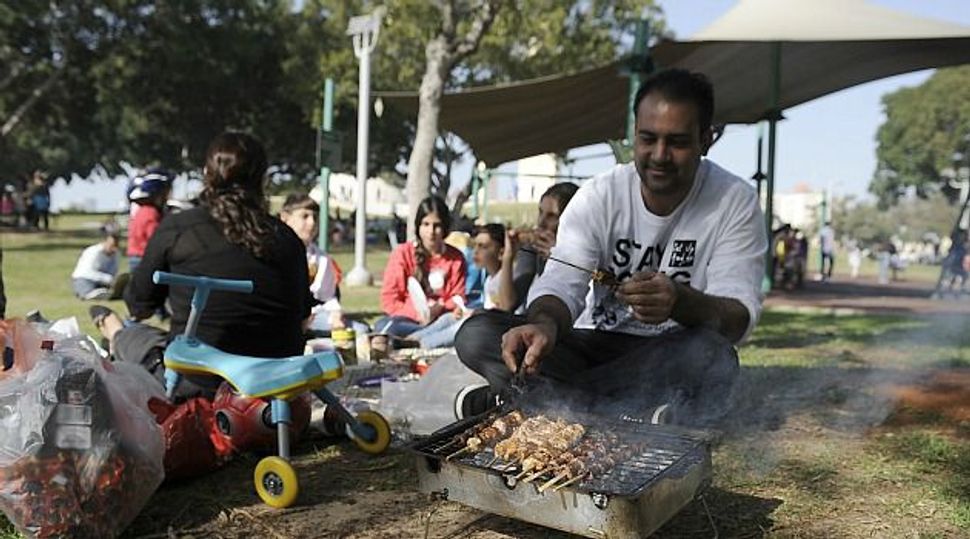 Walk in the Park: Israelis had a plethora of choices as 32 parties ran in national elections. After voting, many enjoyed the winter sunshine on a national holiday. Image by getty images

Yehudit Shimshi had fire in her eyes after she voted in a leafy Israeli suburb on Tuesday, but resignation in her voice.

Her hope for an end to the “reign” of Prime Minister Benjamin Netanyahu was forlorn, she admitted.

“There is a king sitting on the throne in Israel and I want to dethrone him,” the 58-year-old retired elementary school teacher said, her gaze intense. “But it looks like that won’t happen,” she quickly added, looking away.

Shimshi did not say how she voted on the balmy winter morning in Maccabim, which lies so close to the occupied West Bank that Muslim calls to prayer from a Palestinian village sometimes intrude on music pouring from Israeli joggers’ earphones.

But she said social and economic issues had been paramount for her in an election campaign that has largely ignored the frozen Israeli-Palestinian peace process.

Opinion polls have signalled that the right-wing Netanyahu, who promises a “strong Israel” after uprisings in the Arab world and Iran’s nuclear programme raised many Israelis’ security fears, will win a third term.

“There are some scary things out there in the world and Bibi has an eye on them,” said Tahg Adler, 36, a recruiting manager from the central city of Modi’in, using Netanyahu’s nickname.

But the man the media called “King Bibi” after he expanded his government last May into a short-lived “grand coalition”, has watched his lead narrow in the polls in recent weeks.

Jewish Home, a far-right party led by high-tech millionaire Naftali Bennett, has been drawing Netanyahu’s traditional supporters away from the prime minister’s Likud party, according to the surveys.

And new centrist parties, along with veteran centre-left Labour, have been trying to tap into public concern about high living costs that brought hundreds of thousands of protesters into the streets in the summer of 2011.

“None of the candidates is really presenting much foreign policy. We’ll never achieve a peace agreement anyway with our neighbours,” said Orly Amiel, 30, a director of a computer programming firm in Jerusalem.

Israelis voted under sunny skies, spoiled for choice by a smorgasbord of 32 parties – ranging from the marijuana legalisation “Green Leaf” party to the ultra-Orthodox United Torah Judaism – vying for seats in the 120-member parliament.

Turnout by the afternoon was at 38.3 percent, the highest level since 1999, said the Israeli Election Committee, which was overseeing the balloting.

The array of factions and opinions in the Jewish state has created a political landscape in which no one party has ever won a parliamentary majority, making often fragile coalitions the rule.

In Even Yehuda, a town north of Tel Aviv, retired teacher Ahuva Heled, 55, and her husband Simca Heled, a 68-year-old musician, said they had always voted for Likud. Not this time.

“We don’t want to see Shas (in the coalition), who do nothing,” she said about an ultra-Orthodox Jewish party that has joined a succession of Israeli governments in return for state stipends for its institutions.

Simca Heled said he was “fed up with the distribution of gifts to people who don’t contribute what others in this country do”. Netanyahu, he said, “will still be prime minister but he will be limited”.

Tal Noosel, a computer instructor, 38, voted for Eretz Hadasha, a new party that promises to fight corruption and the power of Israeli business tycoons.

“All the other parties are known and they haven’t changed anything in this country. We need new faces, not the ones we’ve already seen. It’s time to give new people a chance,” he said.

Rina Chaver, 89, said it was experience that counted, and that’s why she had voted for Likud. “Netanyahu knows everything to do with security. First things first. He knows his priorities,” she said in Jerusalem.

Netanyahu cast his ballot in a Jerusalem school – election day is a public holiday in Israel – and then went with his two sons to the city’s Western Wall, one of Judaism’s holiest sites.

“I come to the Wall every time to touch what I have said many times is the rock of our existence and I pray today for the future of Israel, with God’s help, for the future of our people,” Netanyahu said as news cameras clicked.

The message, delivered while polling stations were still open, should play well with Netanyahu’s constituents and prospective religious allies in a governing coalition.

In accordance with Israeli political tradition, he’ll be back at the holy place, revered by Jews as a perimeter wall of the Biblical Temple of Jerusalem, to offer more prayers should he form the next government.