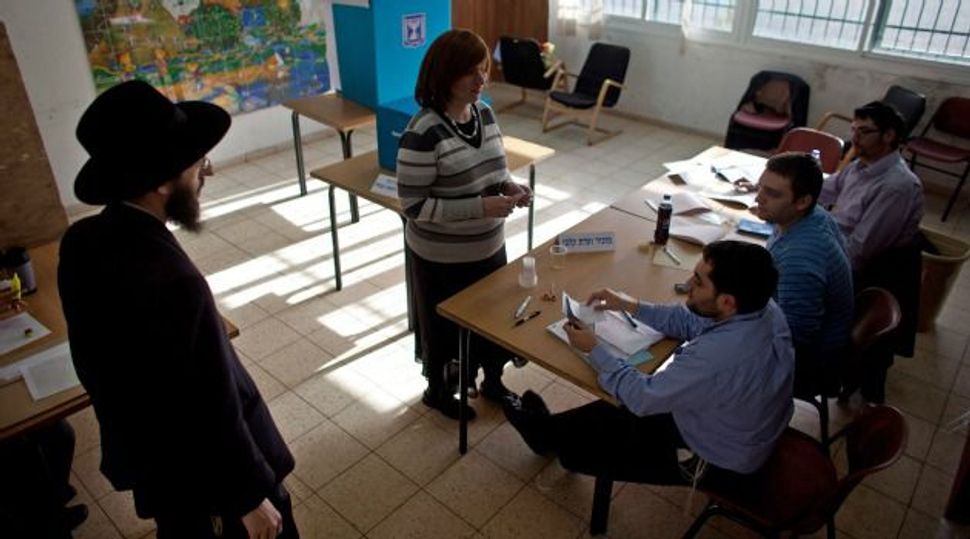 Flood of Voters: Turnout was unexpectedly high in the Israeli election, leading some to suspect that polls showing Benjamin Netanyahu heading for easy reelection could be mistaken. Image by getty images

Israeli Prime Minister Benjamin Netanyahu made a frantic, last-minute appeal to supporters to rush to the polls after an unexpectedly high turnout in Tuesday’s parliamentary election looked set to benefit centre-left opponents.

Netanyahu’s rightist Likud party, running in a single bloc with the ultra-nationalist Yisrael Beitenu group, still seemed certain to win the most seats, but politicians said the late surge in voting could seriously erode his majority.

“Likud rule is in danger. I ask you to drop everything and go out now and vote. This is very important to safeguard Israel’s future,” Netanyahu wrote on his Facebook page.

He hopes to win a third term in office, having served as premier in the 1990s and again since 2009.

A stream of opinion polls before the election had predicted an easy win for Netanyahu, who has said tackling Iran’s nuclear ambitions would be his top priority if he won, shunting Palestinian peacemaking well down the agenda.

Coming off the back of a lacklustre election campaign, the large turnout caught politicians of all stripes by surprise and suggested that an army of undecided voters might have turned against Netanyahu and his nationalist-religious allies.

“We managed to wake up Israel. Every extra percentage point of voter turn out is another hope for an upheaval,” Tzipi Livni, a former foreign minister and leader of a small centrist group, wrote on Twitter, urging her own supporters to get to the polls.

By 8 p.m. (1800 GMT), two hours before polling ends, the Israeli election committee said turnout was 63.7 percent, up from 59.7 percent at the same time in 2009 and the highest level since 1999, when Netanyahu, serving his first term as prime minister, was defeated by then-Labour Party leader Ehud Barak.

The final opinion polls on Friday showed his Likud-Beitenu bloc still on top, but losing some ground to the Jewish Home party, which opposes a Palestinian state and advocates annexing chunks of the occupied West Bank.

Political sources said earlier that Netanyahu might approach centre-left parties after the ballot in an effort to broaden his coalition and present a more moderate face to worried allies.

British Foreign Secretary William Hague warned Israel on Tuesday it was losing international support, saying prospects for a two-state solution to the Israeli-Palestinian conflict were almost dead because of expanding Jewish settlements.

Some 5.66 million Israelis are eligible to vote. Polling stations close at 10 p.m. (2000 GMT). Full results were due by Wednesday morning. Coalition talks could take several weeks.

Basking in warm winter sunshine, Israelis flocked to the polls throughout the day, although few seemed to believe that they could dent Netanyahu’s seemingly impregnable poll lead.

“There is a king sitting on the throne in Israel and I wanted to dethrone him, but it looks like that won’t happen,” said retired teacher Yehudit Shimshi voting in central Israel.

No Israeli party has ever secured an absolute majority, meaning Netanyahu would always need coalition allies.

The former commando has traditionally looked to religious, conservative parties for backing and is widely expected to seek out the surprise star of the campaign, self-made millionaire Naftali Bennett, who heads Jewish Home.

A one-time political aide to Netanyahu and a former settler leader, Bennett’s youthful dynamism has struck a chord amongst Israelis, disillusioned after years of failed peace initiatives.

Surveys suggest Bennett may take up to 14 seats in the 120-member Knesset, many at the expense of Likud-Beitenu. The premier’s bloc was projected to win 32 in the last round of opinion polls published on Friday – 10 less than the two parties won in 2009 when they ran separate lists.

On the centre-left, the main opposition group, Labour, was seen taking 17 seats, although party leader Shelly Yachimovich clearly believed that the number might go higher: “Incredible voter turnout percentages. The government can be changed!” she tweeted.

Netanyahu has said the turbulence, which has brought Islamist governments to power in several countries long ruled by secularist autocrats, including neighbouring Egypt, shows the importance of strengthening national security.

If he wins, he will seek to put concerns about Iran swiftly back into focus. Netanyahu has said he will not let Tehran enrich enough uranium to make a single nuclear bomb – a threshold Israeli experts say could arrive as early as mid-2013.

One of the first problems to face the next government, which will be formed after coalition negotiations and is unlikely to take power before the middle of next month at the earliest, is the stuttering economy.