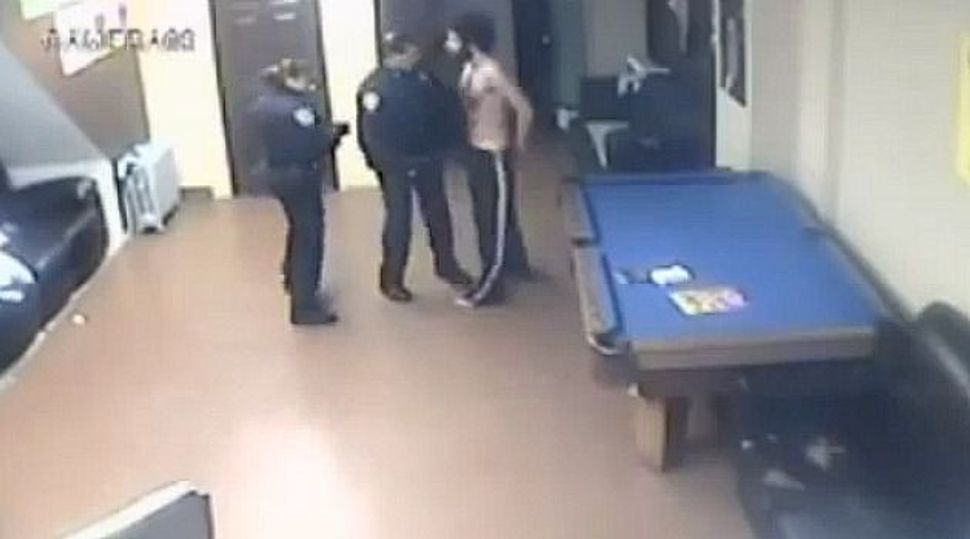 A Brooklyn man who was beaten by New York police officers at a Chabad youth center in Brooklyn has filed a civil rights lawsuit.

Ehud Halevy, 21, filed the lawsuit Jan. 22 in Brooklyn federal court. The assault last October was captured by a security camera.

The video shows Halevy exchanging words with a male police officer and pushing away his hands after the officer had taken out handcuffs. Shortly after, the cop assumes a fighting stance and punches Halevy several times as he and a female officer wrestle Halevy to the couch where he was found sleeping.

During the two-minute incident, the female officer appears to use a truncheon and pepper spray on Halevy. Eight police officers arrive later to handcuff him.

Halevy reportedly had been sleeping on the ALIYA Institute’s couch with permission for about a month before the assault. A volunteer security guard who was not aware of the arrangement had called the police upon discovering the man, who was shirtless and sleeping in the lounge and appeared to be drunk,

Halevy was arrested on assault, resisting arrest and trespassing charges and spent four days in jail before the charges were dropped.