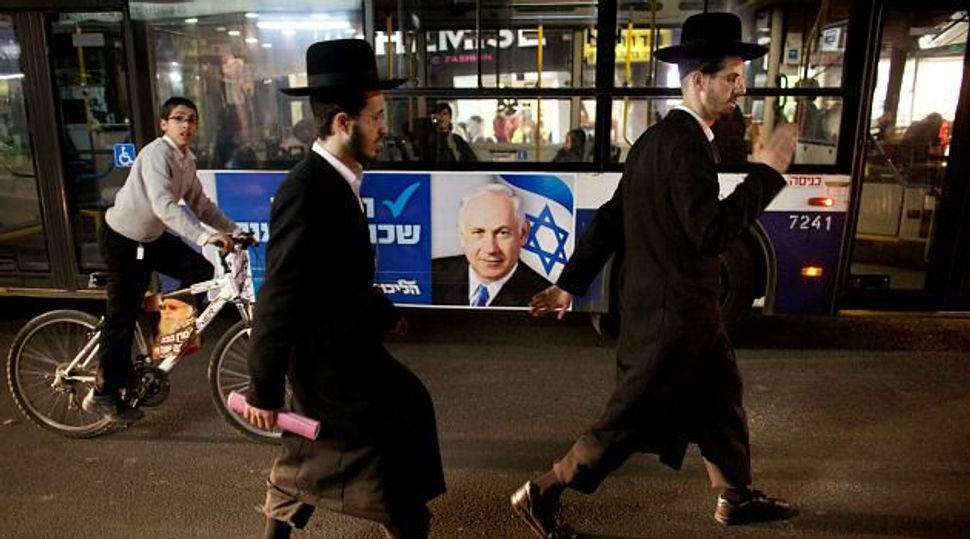 Sidelined: Ultra-Orthodox Jewish parties suffered serious setbacks in the Israeli election and may be sidelined from new government. Image by getty images

Powerful political players for years, Israel’s ultra-Orthodox parties must now reckon with a new force ushered in by voters bent on stripping them of perks they have relied on for decades.

Centrist Yesh Atid (There is a Future) party came a surprise second in Tuesday’s parliamentary election, usurping ultra-Orthodox groups Shas and United Torah Judaism from their long-standing role of kingmakers in coalition negotiations.

Voted in by a frustrated middle-class, Yesh Atid promised to enact an “equal sharing of the burden” – code for curtailing both welfare benefits given to ultra-Orthodox families and an exemption from military service offered to their menfolk.

Prime Minister Benjamin Netanyahu’s rightist Likud-Beitenu party led the field in the election, but he lost a quarter of his parliamentary seats in the process, making it almost impossible for him to ignore the clamour of the centre.

“There is a famous joke we (tell) in Israel,” outgoing Defence Minister Ehud Barak told CNN in an interview.

“One third of the country wakes up to work, one third is paying taxes, and one third is serving in the (army) reserves. Unfortunately it is the same one third. This one third told the government yesterday ‘That is it’,” he said.

The ultra-Orthodox, whose men stand out due to their old-fashioned beards, black hats and long coats, make up roughly 10 percent of the Israeli population. Known as the Haredim, Hebrew for ‘those who tremble before God’, they lead a pious way of life. Most are poor, shy away from mainstream secular culture and keep to their own towns and neighbourhoods.

More than half of Haredi men do not work, choosing to devote themselves to a lifetime study of the main Jewish scriptures, the Torah and the Talmud, for which many receive state stipends.

Successive coalition governments have had to rely for survival on the ultra-Orthodox parties, which in turn exacted state benefits to safeguard their distinctive lifestyle.

“They focus on very specific issues and centre all their power on them, but they give complete freedom on other matters. That is why they are such convenient coalition partners,” said political scientist Gideon Rahat of the Hebrew University.

The ultra-Orthodox bloc helped bring stability to Netanyahu’s last government and he would surely like them back on board this time, so long as he can find a compromise deal.

Ironically, Tuesday’s election saw the ultra-Orthodox parties win 18 seats, one more than in 2009 – a reflection of their growing demographic weight with a fertility rate that is some three times higher than that of other Israeli Jews.

Despite this gain, Ofer Kenig, a political scientist from The Israel Democracy Institute, said the ultra-Orthodox parties had a much reduced bargaining position than before.

“There is a growing recognition among the Haredim too that the current situation cannot continue for much longer,” Kenig said, referring to the Haredi exemptions from military service.

However, the head of the Haredi party United Torah Judaism, Israel Eichler, stoutly defended their privileges on Thursday, telling Israel Radio that his people had a sacred task, as essential to Israel as that carried out by the army.

“The burden is to maintain a Jewish state in Israel, which starts and ends with studying the Torah. There is a need for an army here, but if there is no Torah then there is no need for a state and therefore no need for the military,” he said.

Eli Yishai, a leader of Shas and the outgoing interior minister, hinted that a compromise could be found.

“If the prime minister wants a coalition with Shas … it will be difficult but doable. If we all want it, we can sit together, be more flexible and set up a government,” he said.

Resentment towards the Haredim has been building for years, as they have taken over neighbourhoods and imposed their rule, with zealots separating the sexes in buses, and harassing women and girls if they stray from their strict clothing etiquette.

Bowing under the high cost of living, Israeli tax-payers have accused the ultra-Orthodox of sponging off the state. Benefits are often not specifically defined for any one group in the law, but conveniently, eligibility seems to fit the Haredi.

Discounts on municipal taxes, for instance, can be determined by household income and family size. The Haredi have an average of some eight children per family and because of their low employment rates, have very low income.

Perhaps the biggest bone of contention is the fact that most ultra-Orthodox men can skip obligatory military service because of their religious studies.

The Supreme Court ruled last year that this was unconstitutional and ordered a reform. Senior Yesh Atid officials say curtailing the exemptions must be a priority for the new coalition.

Making a virtue of necessity, Netanyahu has now embraced the language of the centre, saying on Wednesday that it was clear that voters wanted “increasing equality in (bearing) the burden”, adding that this would be one of his three priorities.

Rahat said Netanyahu’s statement could well have been a bargaining move to alarm the ultra-Orthodox parties and lower their price for joining the coalition.

However, he cautioned the secular centrists against raising their expectations. Highly motivated, ready to follow their rabbis onto the streets and driven by a firm belief that they are doing the work of God, the Haredim make a formidable foe.

“The Haredi leadership’s interest is to keep them (Haredim) with their head just above water. I can’t see how this can be changed with (Yesh Atid’s) 19 parliamentary seats,” he said.