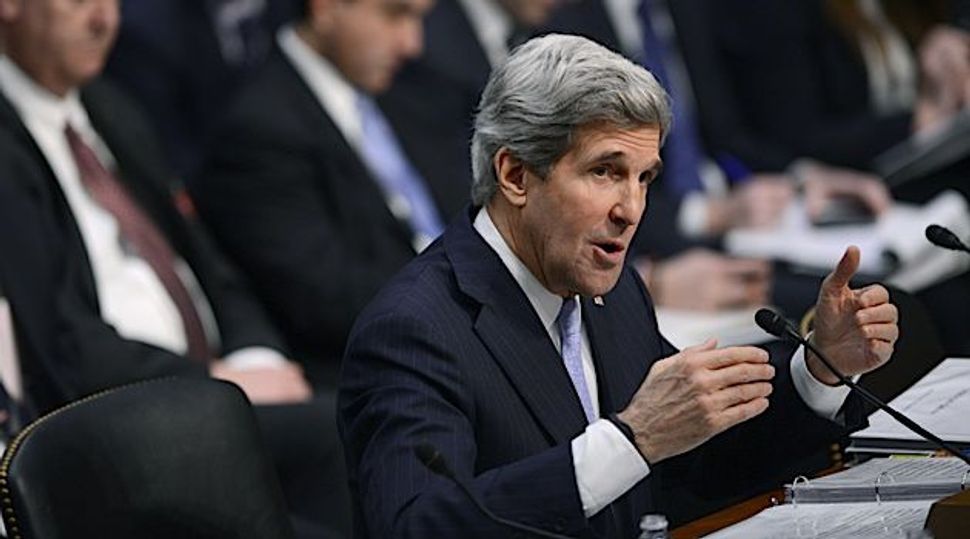 Sen. John Kerry (D-Mass.) emphasized a return to Israeli-Palestinian talks and keeping Iran from obtaining a nuclear weapon at Senate hearings expected to result in his confirmation as secretary of state.

Reports that President Obama was giving up on Middle East peace-making were “overblown,” Kerry said Thursday.

Referring to this week’s Israeli election, which saw a diminution of right-wink representation in the Knesset, Kerry said, “I pray that maybe this will be a moment that will allow us to renew the effort to bring the parties to the negotiating table and go down down a different path than the one they were on in the last few years.”

He said the Israeli-Palestinian issue insinuated itself into every Middle Eastern issue.

“So much of what we aspire to achieve and what we need to do globally, what we need to do in the Maghreb and South Asia, South Central Asia, throughout the Gulf, all of this is tied to what can or doesn’t happen with respect to Israel-Palestine,” he said. “And in some places it’s used as an excuse. In other places it’s a genuine, deeply felt challenge.”

Kerry said he joined Obama in his resolve to keep Iran from obtaining a nuclear weapon.

“President Obama has stated again and again, and I want to emphasize this, he and I prefer a diplomatic solution to this challenge and I will work to give diplomacy every opportunity to succeed – but no one will mistake our resolve,” he said. “Our policy is not containment. It is prevention, and the clock is ticking on our efforts to secure responsible compliance.”

There were until September tensions between the United States and Israel over the timetablele that would determine a casus belli for a military attack on Iran to keep it from obtaining a nuclear weapon. Talks between Obama and Israeli Prime Minister Benjamin Netanyahu that month pushed back any such deadline until the Spring at the earliest.

A number of Republican senators have already signaled their support for Kerry, and he has the solid support of the Democratic majority.