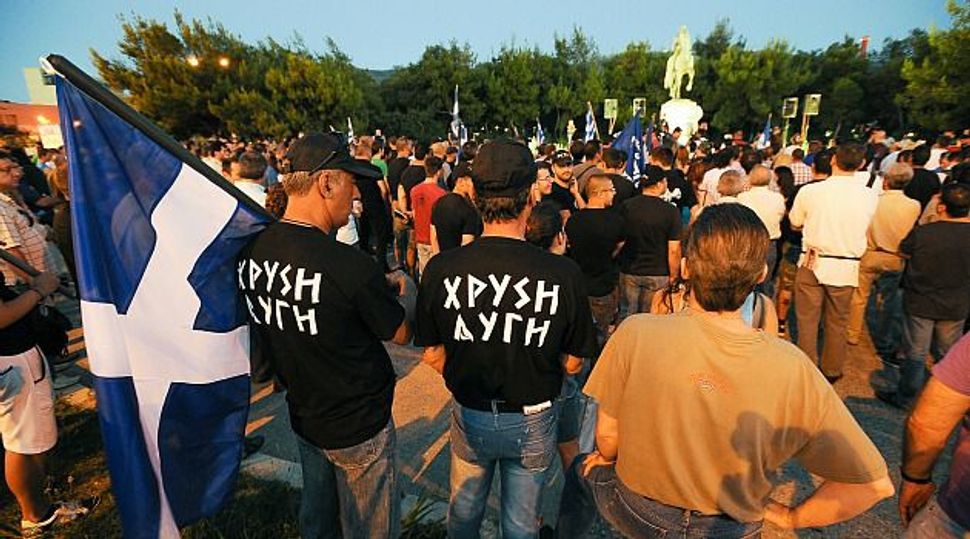 Harris, the executive director of the AJC, is leading a Jewish delegation to the region that is meeting with several Greek leaders, including Prime Minister Antonis Samaras. During the meetings, Harris expressed his “concern and solidarity for Greece during the crisis.”

The statement from Golden Dawn, posted on the party’s website Thursday, slammed the Greek government for giving Harris high-level access. “Just from the meetings, one can understand the influence of international Judaism on the Greek political scene,” the statement said. “The political leadership will once again express its total subjugation to the whims of the ‘chosen’ people.”

“The only solidarity of this gentleman is to his compatriots – the international loan sharks, who are humiliating the Greek people. His concern most likely is related to the inability of Greece make the payments of the predatory interest rates of the vile loans,” it said. “We do not need the crocodile tears of a Jew.”

Golden Dawn swept into the Greek parliament with 19 lawmakers in last year’s elections, campaigning on an anti-austerity, anti-immigrant platform that preying on the fears of Greeks who have seen the country flooded with immigrants amid a terrible recession. Greek and international Jewish groups repeatedly have condemned Golden Dawn as racist and anti-Semitic.

Its leader, Nikolaos Michaloliakos, uses the Heil Hitler salute and has denied the existence of gas chambers at Nazi death camps during World War II. Another lawmaker read a passage from the anti-Semitic forgery “The Protocols of the Elders of Zion.”

The attack on Harris and a separate article titled “Absolute Evil” that was published on the party’s website Friday appeared to be a hardening of Golden Dawn’s anti-Semitic rhetoric, apparently in anger over pressure from Jewish groups to get the Greek government to reign in the party. The “Evil” statement said that blaming Golden Dawn for Greece’s woes constituted an attempt to divert attention from the real culprits for Greece’s financial crisis.

“They are none other than those who possess most of the international wealth. The people behind the international loan-sharks,” the statement said. “Everyone knows they belong to a certain race, which presents itself as a victim, while in reality it is the perpetrator. Everyone knows that they are none other than those pulling the strings behind the marionettes. They are the absolute evil for mankind.”

The second statement ended with a threat.

“The time will come when the nationalists of the Golden Dawn will take revenge like the horsemen of the storm, and all of them, being the absolute evil, will pay!”