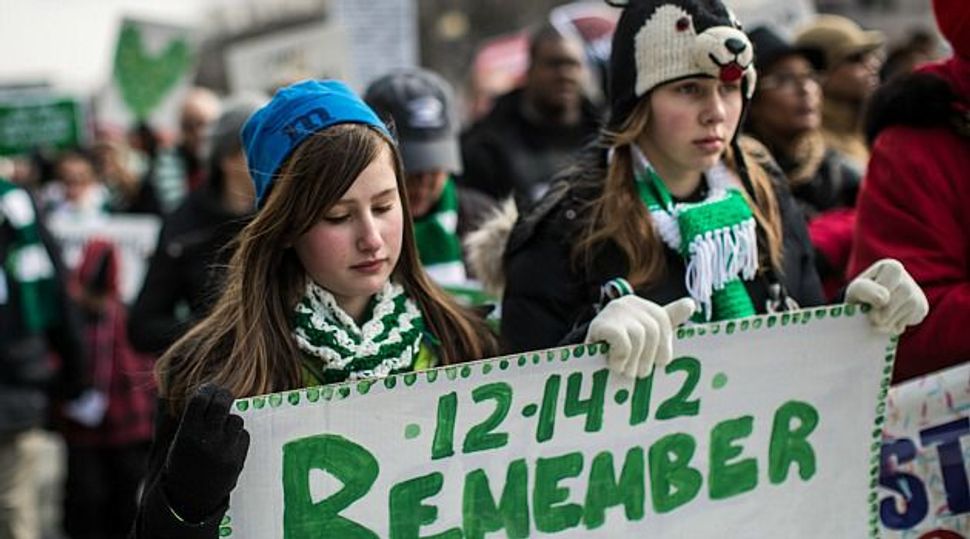 Stop the Violence: Students from Newtown, Conn., joined a rally against gun violence in Washington. Image by getty images

Thousands of marchers rallied in Washington in favor of gun control on Saturday, including residents of Newtown, Connecticut, where a mass elementary school shooting reignited the U.S. gun violence debate.

Speakers – including Education Secretary Arne Duncan, lawmakers and actors – urged the protesters to lobby Congress and state legislators to back gun control measures.

Duncan, who said one student had died from guns every two weeks while he was chief executive of Chicago’s public schools, denied that gun control was about limiting firearm rights guaranteed by the U.S. Constitution. Murders in that city last year rose to the highest level since 2008, according to police.

Organizers backed President Barack Obama’s call for a ban on military-style assault weapons and high-capacity ammunition magazines and background checks for all gun sales. They also urged safety training for all buyers of firearms.

Marchers stretched for several blocks along Constitution Avenue as they approached the rally site in the shadow of the Washington Monument.

Participants included politicians from Maryland and the District of Columbia, including Washington Mayor Vincent Gray, as well as actress Kathleen Turner and Marian Wright Edelman, founder of the Children’s Defense Fund.

The protest came a week after gun rights supporters held rallies across the United States to oppose firearms control.

The 90-minute rally was organized by Molly Smith, artistic director of Washington’s Arena Stage, and her partner, and co-sponsored by One Million Moms for Gun Control, an advocacy group.

One Million Moms organized similar events on Saturday in about a dozen cities, including San Francisco and Austin, Texas.

About 100 residents of Newtown and surrounding areas attended the rally and march down Constitution Avenue. A gunman killed 20 first-graders and six adults on Dec. 14 at Sandy Hook Elementary School in Newtown, and numerous speakers and marchers said that rampage had spurred them to act.

“It’s difficult to get laws changed when politicians are bought out, but we have to start somewhere,” said Amy Journo, 38, an occupational therapist whose two sons, ages 5 and 7, attended Sandy Hook.

“I want to ensure that they (children) are safer, not just my children but all across the United States,” Journo said.

A spokesman for the U.S. Capitol Police declined to give an estimate of crowd size, citing department policy.

Obama’s proposals, the most significant attempt at gun-control in decades, face an uphill battle in Congress. The proposals are strongly opposed by gun advocates, such as the powerful National Rifle Association.

The lobbying group has said that current laws need better enforcement, issues of mental health should be addressed and that tighter laws could not have prevented Newtown.

About 11,100 Americans died in gun-related killings in 2011, according to preliminary data from the U.S. Centers for Disease Control and Prevention. There were 19,766 suicides by firearms in 2011, the CDC said.