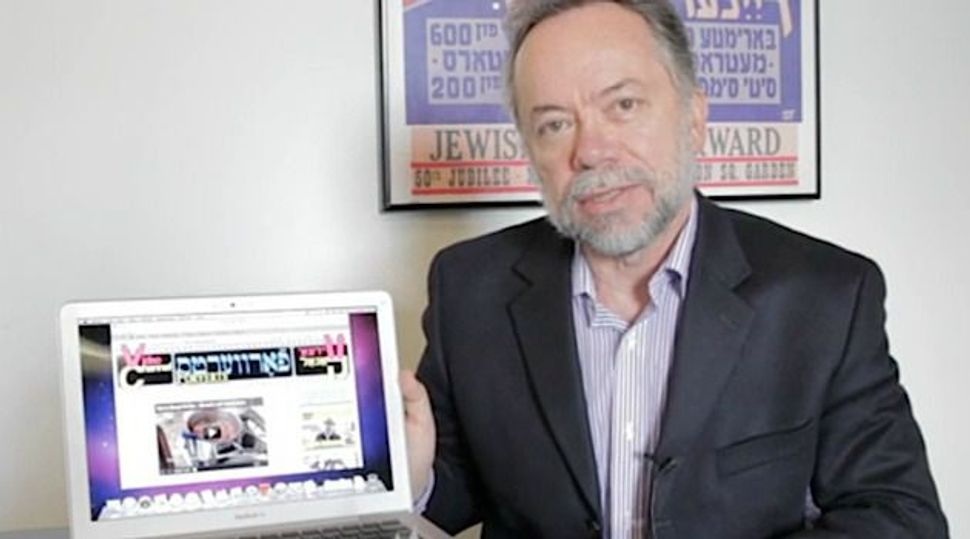 Next Monday, Forverts (Forward) will launch a daily news website for Yiddish speakers who are bringing the language of Eastern Europe’s Ashkenazi Jews back from its near-death experience when millions of speakers died in the Holocaust.

The New York-based weekly, launched in 1897 as a crusading socialist daily for Jewish immigrants to the United States, has been in slow decline since 1945. It cut back to weekly from daily publishing in 1983 and launched an English-language weekly in 1990.

“The website is going for an international audience,” said associate editor Itzik Gottesman, noting the ranks of native speakers, mostly from Hasidic and yeshiva (religious school) backgrounds, was now booming in the United States, Israel and other countries.

“Research in New York City said there are 80,000 Hasidim who speak Yiddish at home. That population is exploding,” he said.

In Israel, Yiddish is the language of many Haredim (“those who tremble before God”), whose tradition of large families has propelled them from a tiny minority decades ago to a politically influential 10 percent bloc of the population.

About one-quarter of all Israeli first grade pupils are now from Haredi or “ultra-Orthodox” families. In the New York area, more than one-third of all Jewish children are Hasidic.

“We will have a growing Hasidic audience,” publisher Samuel Norich said by telephone from the paper’s office in lower Manhattan.

That prospect is not without irony. In its pre-war heyday, more pious Jews saw Forverts as anti-religion and “not kosher.” Although it covers religion, its editorial line is mostly secular and liberal.

A vibrant German dialect peppered with Hebrew and Slavic words and written in Hebrew letters, Yiddish in the early 20th century was a major language in eastern Europe.

With the big influx of many tens of thousands of Jews fleeing the Holocaust to the United States and particularly the east coast, it became an important ingredient in the rich mix of the language of New York City. Several words have been adopted into English such as “chutzpah” (brazen self-confidence) and “shlemiel” (chump).

The fastest-growing Hasidic groups in the New York borough of Brooklyn now are tightly-knit communities with their own printed Yiddish weeklies. Many computers are equipped with filters to screen out non-Orthodox media.

“Our site is not intended to be for everybody. Some will be offended by the photographs of women,” Norich said. Some ultra-Orthodox publications never print pictures of women.

“There have always been some Hasidim and yeshiva people who have read the Forverts, but usually they read it underneath their own Yiddish newspaper so nobody should know it,” he said.

“But on the Internet, where you can read it in the privacy of your own home or laptop, it’s easier to do what is frowned upon in the community and consume forbidden fruit.”

Forverts’ Yiddish website will include blogs by Hasidic writers, retaining the slightly different grammar and spelling they use. But the authors will hide behind pseudonyms to avoid criticism from their own communities.

One problem is that many potential visitors to the website can’t easily read Yiddish. Younger fans may have studied it at universities as a foreign language, while older Jews spoke it with parents or grandparents but never learned to read it.

For these users, the website will also carry audio reports and videos with English subtitles. Written reports – from correspondents in the United States, Israel, Russia, Poland, France, Argentina and Australia – will have an online dictionary so that the English translation of a word is only a click away.

“We want to draw people whose Yiddish level is not good enough to read the printed Forverts,” Gottesman said.

“The idea of the website is to be the hub of the Yiddish cultural world, for the students, the older people and the Hasidim. We hope to get everyone to this website.” The English-language Forward has tripled its online readership in the last 2 years and its print output has stayed stable at 29,000 copies a week, which is estimated to reach 80,000 readers.

The Yiddish Forverts has a print run of 2,100 copies and about 6,000 readers. Shifting staff to the website, which editors hope can grow as quickly as the English website, means the print edition will have to be reduced to appearing once every other week.

The print edition will continue even though more than half its readers are in their 80s and 90s. About one-third of its subscribers also buy the English-language paper because the two are not simply translations of each other.

“The Yiddish paper has much more coverage of Ashkenazic culture, Yiddish culture, European Jewish history of the last century and the Soviet period than the English paper has,” Norich said. Half the Yiddish readers are Holocaust survivors who arrived in the United States between 1945 and 1955.

Serving these readers is a top priority for the non-profit foundation that publishes the two papers.

“This is a core mission for us,” Norich declared. “This is our origin and we’re not going to abandon it.”