In Confirmation Hearing, Hagel Is Challenged by Both Friends and Foes 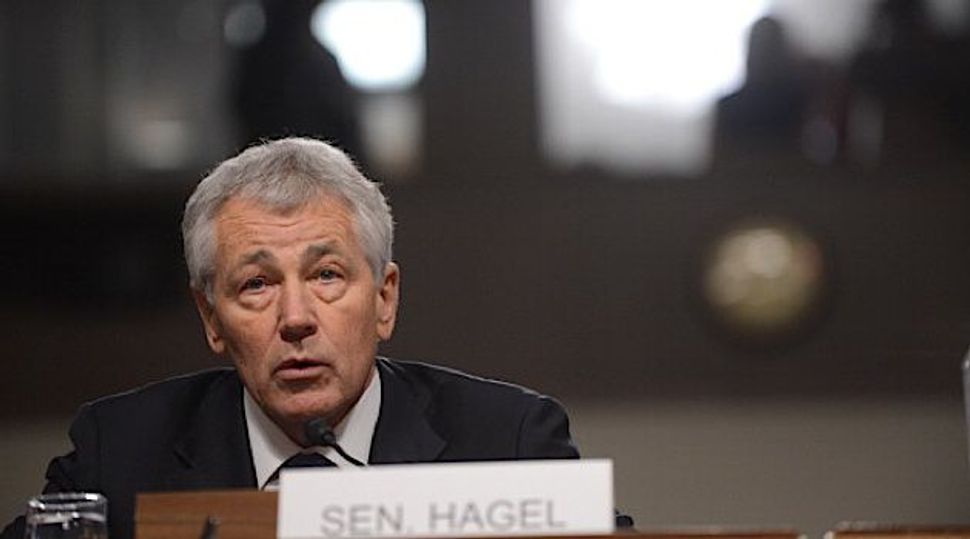 Stepping into the lion’s den, Chuck Hagel, took his seat across the Senate Armed Services Committee this morning, only to hear his confirmation hearing begin with a series of attacks — from friends and foes alike on both sides of the aisle.

Committee chairman Carl Levin, a Jewish senator from Michigan who supports Hagel, called Hagel’s past statements and votes regarding Israel and its supporters in the United States “troubling.”

But, during the question and answer session, Hagel attempted to defend his position, stating at one point that he is “on the record” on being supportive of Israel. “I’ve always said I’m supportive of Israel, in some cases I’ve said I’m a strong supporter of Israel.” He then quoted Israel’s deputy foreign minister Danny Ayalon who said “some fairly positive things about me.” He also promised to support Israel’s qualitative military edge and to continue funding for Iron Dome systems.

Pressed on what are his “red lines” about Iran, a term borrowed from Israeli Prime Minister Benjamin Netanyahu, Hagel refused to answer, saying it was up to the President to make such a decision. Hagel added that President Obama is the most supportive president toward Israel, since Harry Truman.

In his prepared opening statement, Hagel tried to put to rest some of the key arguments against him. He stated that “I am fully committed to the President’s goal of preventing Iran from obtaining a nuclear weapon, and — as I’ve said in the past — all options must be on the table to achieve that goal. My policy is one of prevention, and not one of containment.”

Levin pressed Hagel on his previous votes against American unilateral sanctions on Iran and statements expressing skepticism regarding the use of military power against Iran. Levin did note, however, that in his talks with Hagel, he was reassured that “he supports the Obama administration’s strong stance against Iran is significant.”

Levin and fellow Democrats, even when critical, were Hagel’s least worry. Republican senators, led by Arizona’s John McCain who started by calling Hagel a “friend,” grilled the nominee aggressively, pressing him on issues ranging from his opposition to the Iraq surge to past support for reducing America’s nuclear stockpile.

Hagel’s stuck to his talking points which have been presented in recent weeks personally to senators, stressing his strong commitment to prevent Iran from becoming nuclear and his support for Israel. He also attempted to clear up his his controversial use of the term “Jewish lobby” and it being “intimidating,” expressing regret for using the term, saying: “I should have said ‘The pro-Israel lobby.’” Hagel also said he should have used the word “influence” instead of “intimidation” and should not have described some of the lobby’s work as “dumb.”

In Confirmation Hearing, Hagel Is Challenged by Both Friends and Foes