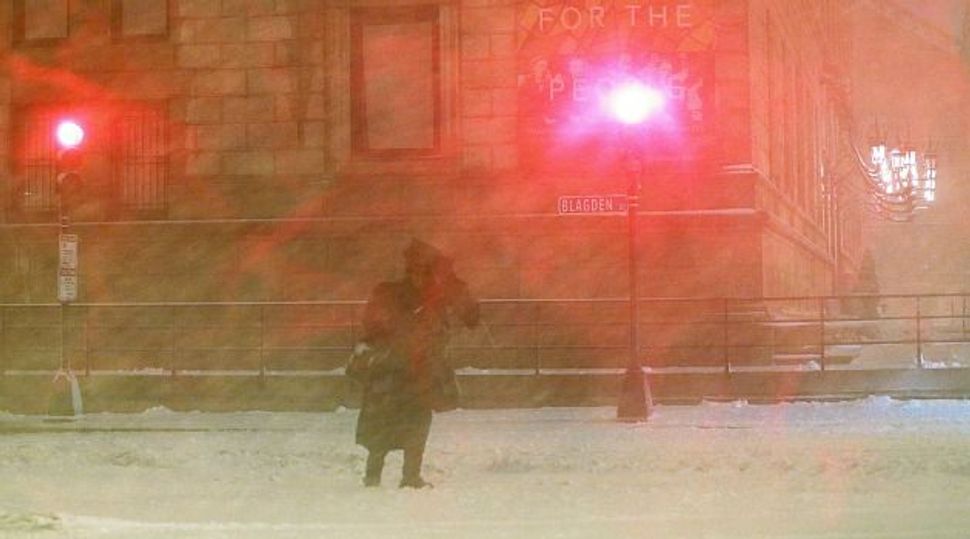 Shabbat Show: Some synagogogues in New England closed as a powerful storm rumbled into the region. Image by getty images

Some synagogues have cancelled services ahead of a potentially historic blizzard.

At least two synagogues in Providence, R.I., have called off Shabbat services this week in light of the expected severe weather. More than two feet are expected in Providence, one of the highest predicted snowfalls.

“Due to the impending blizzard all worship services have been canceled Friday, Saturday and Sunday,” said a recorded message at Providence’s Temple Beth-El on Friday afternoon.

The Touro Synagogue, the oldest synagogue in the country, will reportedly not hold prayer services this shabbat for the first time in years.

In New York City, where snow is expected to be lighter, fewer cancellations were reported.

B’nai Jeshurun on Manhattan’s Upper West Side said services will be held as usual with the exception of a special service for young children, which had been canceled.

“A lot of people live within walking distance so we’re allowing them to use their own discretion,” said a spokesperson. A blizzard slammed into the northeastern United States on Friday, snarling traffic, disrupting thousands of flights and prompting five governors to declare states of emergency in the face of a fearsome snowstorm.

Forecasters warned that about 2 feet (60 cm) of snow would blanket most of the Boston area with some spots getting as much as 30 inches (76 cm). New York was due to get about a foot (30 cm) in some areas, while heavy snowfall was also expected in Connecticut and Maine.

As the evening wore on and the snow piled up, mass transit was also affected.

In New York City, transit officials said “suspensions in service remain a strong possibility,” and Metro-North Railroad suspended some of its commuter rail service at 10 p.m.

The blizzard left about 10,000 customers along the East Coast without power, and some 3,500 flights were canceled.

“We’re seeing heavier snow overspread the region from south to north,” said Lance Franck, a meteorologist with the National Weather Service in Taunton, Massachusetts, outside Boston. “As the snow picks up in intensity, we’re expecting it to fall at a rate of upwards of two to three inches per hour.”

Early Friday evening, officials warned that the storm was just ramping up to full strength, and that heavy snow and high winds would continue through midday on Saturday. The governors of Massachusetts, Rhode Island, Connecticut, New York and Maine declared states of emergency and urged people to stay indoors.

In many cases, authorities ordered non-essential government workers to stay home, urged private employers to do the same, told people to prepare for power outages and encouraged them to check on elderly or disabled neighbors.

People appeared to take the warnings seriously. Traffic on streets and ridership on public transportation was significantly lighter than usual on Friday.

“This is a very large and powerful storm, however we are encouraged by the numbers of people who stayed home today,” Boston Mayor Thomas Menino told reporters.

In New York City, Mayor Michael Bloomberg suggested the storm created an opportunity to relax and catch up on sleep.

Even so, the storm caused a few accidents, including a 19-vehicle pile-up outside Portland, Maine, that sent one person to the hospital.

The storm wasn’t bad news for everyone.

When told an estimated 8 to 10 inches (20 to 25 cm) of snow was predicted overnight at Elk Mountain in Uniondale, Pennsylvania, pint-sized skier Sophia Chesner’s eyes grew wide.

“Whoa!” said the 8-year-old from Moorestown, New Jersey, who was on a ski vacation with her family. Her sister, Giuliana, 4, said no matter how good the skiing was, she had other priorities once the snow piled up.

“First thing I’m going to do is build a snowman and look for a Sasquatch footprint,” Guiliana Chesner said.

Life was not as rosy for those who planned to fly. In addition to Friday’s cancellations, more than 1,200 flights scheduled for Saturday were scratched, according to the website FlightAware.com.

The storm also posed a risk of flooding at high tide to areas still recovering from Superstorm Sandy last October.

“Many of the same communities that were inundated by Hurricane Sandy’s tidal surge just about 100 days ago are likely to see some moderate coastal flooding this evening,” said Bloomberg.

Brick Township in New Jersey had crews out building up sand dunes and berms ahead of a forecast storm surge, said Mayor Stephen Acropolis.

Organizers of the country’s championship sledding race, which had been scheduled to get underway in Camden, Maine, on Saturday, postponed the event by one day. Some 400 teams were registered for the race, which features costumed sledders on a 400-foot (121-meter) chute.

“As soon as the weather clears on Saturday and it is safe, the toboggan committee will be out at Tobogganville cleaning up the chute as quickly as they can,” said Holly Edwards, chairwoman of the U.S. National Toboggan Championships.

“It needs to be shoveled out by hand.”