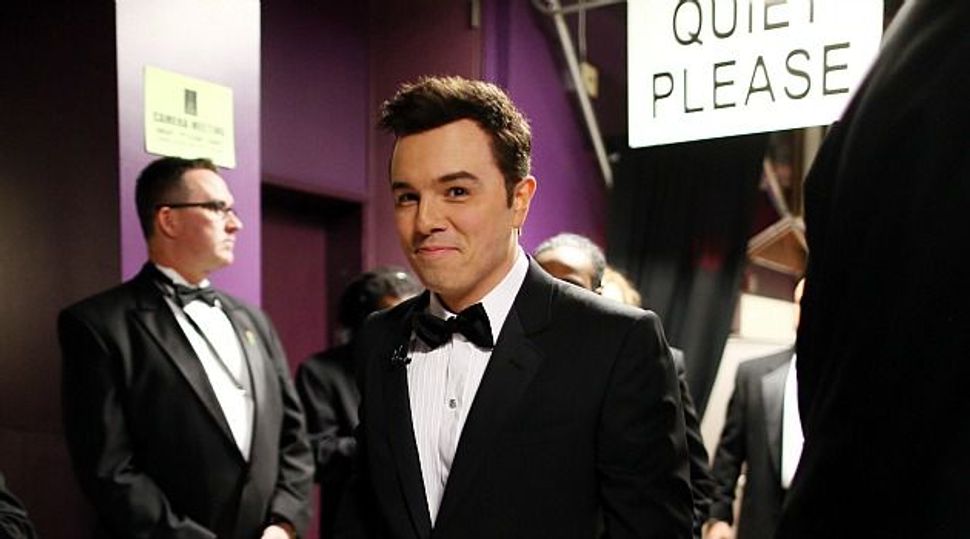 Nielsen ratings data on Monday showed that 40.3 million Americans watched the Academy Awards ceremony on ABC television, up three percent from 2012. ABC said it was the largest Oscar audience in three years.

Boosted by a bumper box office crop of movies and intrigue over MacFarlane’s debut as Oscar host, the show grew 11 percent in the 18-49 year-old audience most coveted by advertisers, and by 34 percent in 18-34 year-old men compared to 2012.

After a night of zingers about gays and Jews and risque jokes about female nudity, the man behind animated TV series “Family Guy” largely lived up to his own prophecy – at least judging by traditional media – that he could be deemed the worst host in Oscar history.

Rolling Stone writer Rob Sheffield said MacFarlane appeared like a “bumbling rookie” and “few ideas could have been stupider” than turning the Academy Awards into a “Seth MacFarlane variety special.”

The Anti-Defamation League (ADL), which campaigns against anti-Semitism, said it was “sad and disheartening” that the Academy Awards show had “sought to use age-old anti-Jewish stereotypes for laughs.”

The group pointed to a sketch in which MacFarlane’s puppet bear Ted remarked to the A-list crowd at the Dolby Theatre that it’s better to be Jewish if you want to work in Hollywood.

“When one considers the global audience of the Oscars of upwards of two billion people, including many who know little or nothing about Hollywood or the falsity of such Jewish stereotypes, there’s a much higher potential for the ‘Jews control Hollywood’ myth to be accepted as fact,” ADL national director Abraham H. Foxman said in a statement on Monday.

MacFarlane, 39, fared better on Facebook, Twitter and blogs, where 13 percent declared him the “best host ever”, according to conversations tracked by social media research firm Fizziology.

And MacFarlane didn’t win over the online world just because of his wit. Seven percent said he was “the sexiest” host, Fizziology said on Monday.

Many TV critics were equally put off by the song and dance heavy Oscars telecast, which ran to three and 1/2 hours.

Los Angeles TV critic Mary McNamara seemed to agree, calling the Oscar telecast “long, self-indulgent and dull even by the show’s time-honored dull-defining standards” despite the valiant efforts of performers Adele and Barbra Streisand and “a surprisingly witty” Daniel Day-Lewis in his Best Actor acceptance speech.

ABC, a unit of Walt Disney, also reported growth to its online and social media platforms, saying that its Oscar.com website had attracted 15.8 million visitors since the Academy Award nominations were announced in early January – a 28 percent increase over 2012.

Last year, when Billy Crystal hosted for the ninth time, some 39.3 million people watched the Oscars ceremony on television.