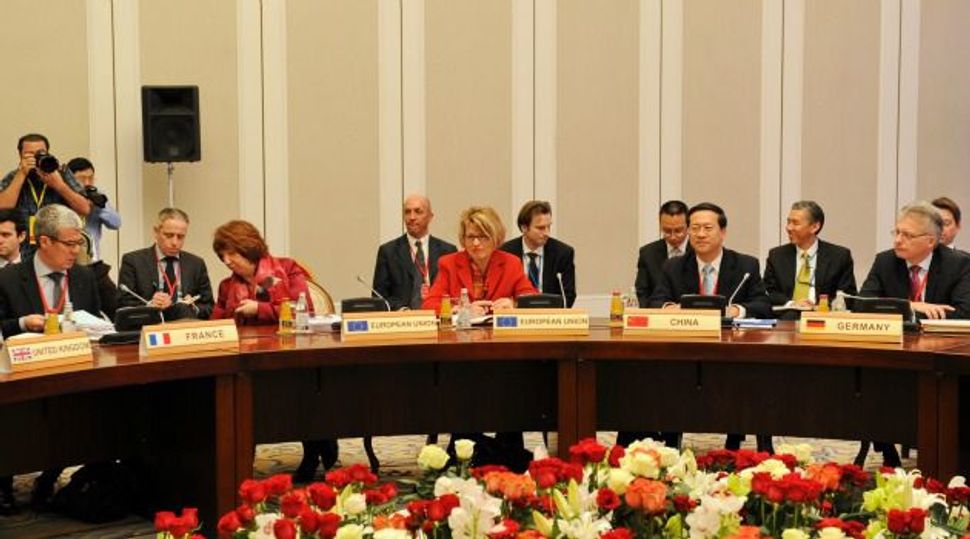 Iran gave an upbeat assessment of two days of nuclear talks with world powers that ended on Wednesday, but Western officials said Tehran must start taking concrete steps to ease mounting concerns about its atomic activity.

The first negotiations between Iran and six world powers in eight months ended without a breakthrough in Almaty, but they agreed to meet again at expert level in Istanbul next month and resume political discussions in the Kazakh city on April 5.

Israel, assumed to be the Middle East’s only nuclear-armed power, is watching the talks closely. It has strongly hinted it might attack Iran if diplomacy and sanctions fail to stop it from acquiring nuclear weapons. Iran denies any such aim.

Iran’s foreign minister said he was optimistic an agreement could be reached with the powers – the United States, France, Russia, Britain, Germany and China – on the country’s disputed nuclear programme.

“Very confident,” Ali Akbar Salehi told Reuters when asked on the sidelines of a U.N. conference in Vienna how confident he was of a positive outcome.

The six powers offered at the Feb. 26-27 Almaty meeting to lift some sanctions if Iran scaled back nuclear activity that the West fears could be used to build a bomb.

Tehran, which says its programme is entirely peaceful, did not agree to do so and the sides did not appear any closer to a deal to resolve a decade-old dispute that could lead to another war in the Middle East if diplomacy fails.

But Iran still said the talks were a positive step in which the six powers tried to “get closer to our viewpoint”.

Western officials had made clear they did not expect major progress in Almaty, aware that the closeness of Iran’s presidential election in June is raising political tensions in Tehran and makes significant concessions unlikely.

“I hope the Iranian side is looking positively on the proposal we put forward,” said European Union foreign policy chief Catherine Ashton, who led the talks on behalf of the powers. “We have to see what happens next.”

The United States did not expect a breakthrough and “the result was clearly in line with those expectations,” a senior U.S official said.

The meeting was “useful” as the two sides agreed dates and venues for follow-up talks but there was a need for progress on confidence building measures, the official added.

The West’s immediate priority is that Iran halts higher-grade uranium enrichment and closes an underground facility, Fordow, where this work is carried out. The material is a relatively short technical step from bomb-grade uranium.

“What we care about at the end is concrete results,” the U.S. official said.

One diplomat in Almaty said the Iranians appeared to be suggesting at the negotiations that they were opening new avenues, but that it was not clear if this was really the case.

Both sides said experts would meet for talks in the Turkish city of Istanbul on March 18 and that political negotiators would return to Almaty on April 5-6.

Russian negotiator Sergei Ryabkov confirmed that the powers had offered to ease sanctions on Iran if it stops enriching uranium to 20 percent fissile purity – a short technical step from weapons grade – at the Fordow underground site where it carries out its most controversial uranium enrichment work.

Western officials said the offer of sanctions relief included a resumption of trade in gold and precious metals.

One diplomat said that lifting an embargo on imports of Iranian petrochemical products to Europe, if Iran responded, was also on the table. But a U.S. official said the world powers had not offered to suspend oil or financial sanctions.

The sanctions are hurting Iran’s economy and its chief nuclear negotiator, Saeed Jalili, suggested Iran could discuss its production of higher-grade nuclear fuel, although he appeared to rule out shutting Fordow.

In comments in Persian translated into English, Jalili told a news conference Fordow was under the supervision of the U.N. nuclear watchdog and there was no justification for closing it.

Asked about the production of 20-percent enriched fuel, he reiterated Iran’s position that it needed this for a research reactor and had a right to produce it.

Iran says its enrichment programme is aimed solely at fuelling nuclear power plants so that it can export more oil, and that Israel’s assumed nuclear arsenal is the main threat to peace in the region.

But Jalili did indicate that Iran might be prepared to talk about the issue, saying: “This can be discussed in the negotiations … in view of confidence building.”

Iran has also previously suggested that 20-percent enrichment was up for negotiation if it received the fuel from abroad instead. It also wants sanctions lifted.

“While an agreement to meet again may not impress sceptics of diplomacy, an important development did occur,” said Trita Parsi, an expert on Iran. “The parties began searching for a solution by offering positive measures in order to secure concessions from the other side.

Another expert, Dina Esfandiary of the International Institute for Strategic Studies, said: “I note that the mood is more optimistic and that’s great, but a deal still hasn’t been reached and in my view its unlikely to be reached before the Iranian elections have come and gone.”