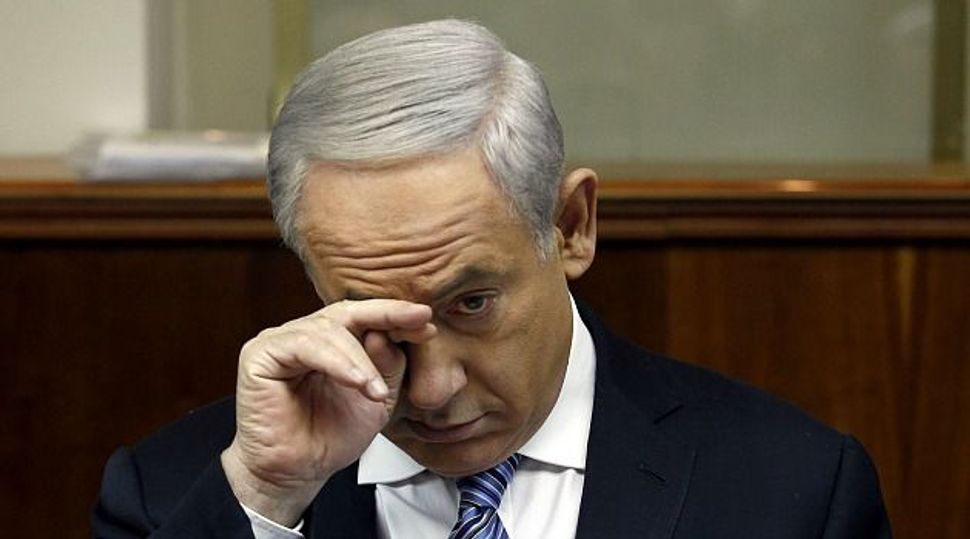 Benjamin Netanyahu suggested that Iran is taking advantage of world powers by stringing out talks over its nuclear arsenal. Image by getty images

His remarks on the inconclusive Feb. 26-27 meeting between Iran and six world powers signalled impatience by Israel, which has threatened to launch preemptive war on its arch-foe, possibly in the coming months, if it deems diplomacy a dead end.

Senior U.S. diplomat Wendy Sherman flew in to brief Israel about the Kazakh-hosted talks, in which Tehran, which denies seeking nuclear arms, was offered modest relief from sanctions in return for halting mid-level uranium enrichment.

There was no breakthrough. The sides will reconvene in Almaty on April 5-6 after holding technical talks in Istanbul.

“My impression from these talks is that the only thing that is gained from them is a buying of time, and through this time-buying Iran intends to continue enriching nuclear material for an atomic bomb and is indeed getting closer to this goal,” Netanyahu told his Cabinet in remarks aired by Israeli media.

Extrapolating from U.N. reports on Iran’s enrichment of uranium to 20 percent fissile purity, a short technical step from weapons-grade, Netanyahu has set a mid-2013 “red line” for denying the Islamic republic the fuel needed for a first bomb.

Iranian media reported on Sunday the country was building around 3,000 new advanced enrichment centrifuges, a development that could accelerate the nuclear project.

The prospect of unilateral Israeli strikes, and the likely wide-ranging reprisals by Iran and its regional allies, worries Washington, which wants to pursue diplomacy as it winds down costly military commitments abroad.

In an attempt to make their proposals more palatable to Tehran, the United States and five other world powers appeared to have softened previous demands in Almaty – for example regarding their requirement that the Iranians ship out their stockpile of the higher-grade uranium.

A senior Israeli official said that while the Netanyahu government had hoped for a tougher line by the so-called P5+1, it was resigned to awaiting the results of this round of talks.

“At the end of the day, what matters is that the Iranians end their enrichment, whether it’s through shutting down their facilities or through more nuanced technical safeguards,” the official, speaking on condition of anonymity, told Reuters.

The official would not comment on how or if the latest diplomacy had affected the readiness of Israel, which is widely assumed to have the region’s only nuclear arsenal, to go to war.

Iran may have warded off that threat by turning some of its 20 percent-pure uranium into fuel rods for a research reactor.

The international standoff and shifting timelines are expected to dominate U.S. President Barack Obama’s trip to Israel later this month. The Israelis urge a tougher posture on Iran from their ally, which has a hefty military presence in the Gulf and says it is poised to use force as a last resort.

“Therefore, all options must remain on the table,” he told the pro-Israel lobby group. “We expect all those who say it to mean it. We mean it.”

Israel’s dovish president, Shimon Peres, sounded more upbeat after meeting Sherman last Thursday. Peres said he had “total faith in the Obama administration, in its commitment and its actions in preventing Iran from developing nuclear weapons”.

Obama’s Israel visit has been overshadowed by local politics too, given the rightist Netanyahu’s failure so far to build a new coalition government after he narrowly won a Jan. 22 ballot.

Appealing to potential party allies to rally to him in the name of national security, Netanyahu told his cabinet: “To my regret this is not happening, and in the coming days I will continue my efforts to unify and galvanise forces ahead of the major national and international challenges that we face.”