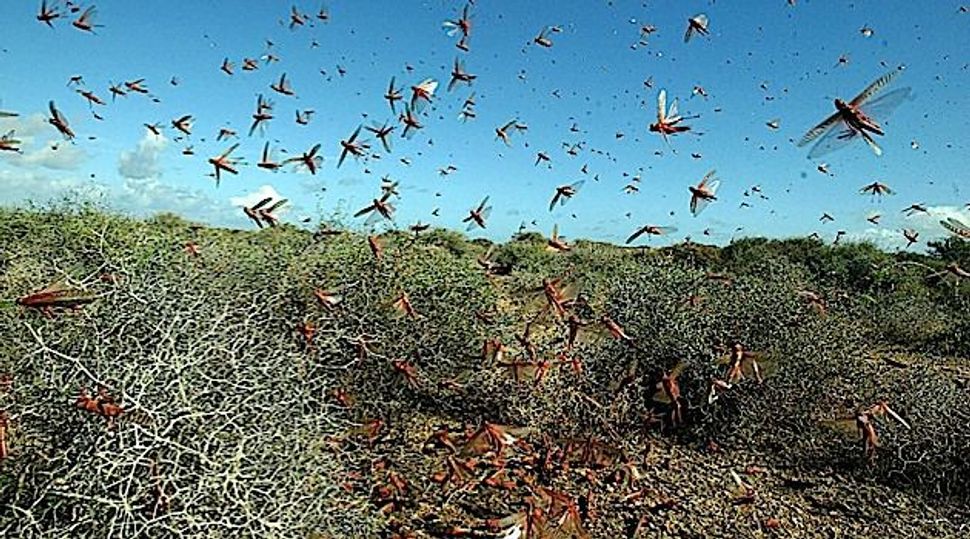 srael on Wednesday began battling a swarm of locusts from Egypt on Wednesday to prevent crop damage in the south of the country.

Locust clouds darkened skies some three weeks before the Jewish Passover holiday that recalls 10 Biblical plagues, one of them locusts, that struck Egypt during the exodus of Israelite slaves.

The insects covered nearly 2,000 acres (800 hectares) of desert overnight, officials said. Israel sprayed pesticides from the air and land to try to kill them in the early morning before dew on their wings dried and they could take off again.

Miriam Freund, director of plant protection in the Agriculture Ministry, called it a “medium-sized swarm” and her office set up a hotline for farmers to call in case they see it advance.

“We hope our actions are effective,” one of the pilots of a plane spraying the fields said on Army Radio. “Let’s hope the damage will be minimal.”

Locusts, which wreak havoc by eating crops, last invaded southern Israel in 2004, said the pilot, who gave only his first name, Shai.

Potato farmer Pavel Rosenfeld, who lives about 3 km (2 miles) from the Egyptian border, said 30 to 40 percent of his land had already been damaged.

“Everything depends on the wind … and we are praying that the wind doesn’t bring us more,” he said on Army Radio.