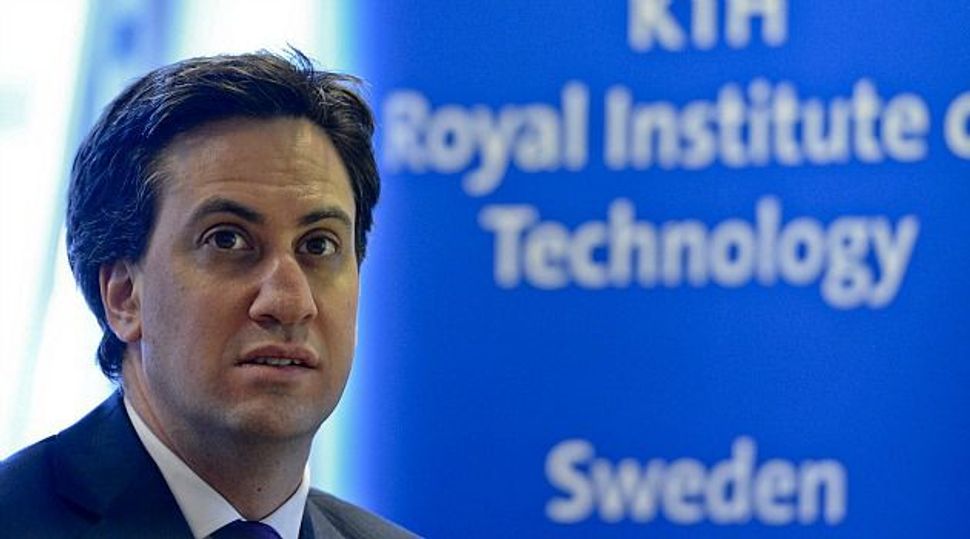 Support: Ed Miliband delivered a message of support for Israel and Jewish ritual to a gathering of British Jews. Image by getty images

Ed Miliband, the leader of Britain’s Labour Party, has pledged to oppose boycotts of Israel and to protect Jewish customs, including circumcision and ritual slaughter.

Speaking Thursday before a crowd of 300 at an event organized by Britain’s main Jewish umbrella group, the leader of the British opposition, who is Jewish, warned of the need to be “ever-vigilant” against anti-Semitism, the Jewish Chronicle reported.

Asked whether he would work to ensure religious slaughter and circumcision practices could continue in Britain, Miliband said: “Yes, these are important traditions. The kosher issue has recently been brought to my attention. Ways of life must be preserved.”

The Chronicle also quoted Miliband as saying that he takes anti-Semitism “very seriously” and that delegitimizing Israel is “something we should call out for what it is and not tolerate it.”

“I think the boycotts of Israel are totally wrong,” he said. “We should have no tolerance for boycotts. I would say that to any trade union leaders.”

He also said people must “understand the anger and dismay about settlements.”

The headline of the Jewish Chronicle report on the event was “I’m a Zionist and oppose boycotts of Israel.” Miliband’s office later said his comments on Zionism were “misinterpreted.”

The Daily Telegraph reported that Miliband had been asked whether he was a Zionist and answered: “Yes, I am a supporter of Israel.”