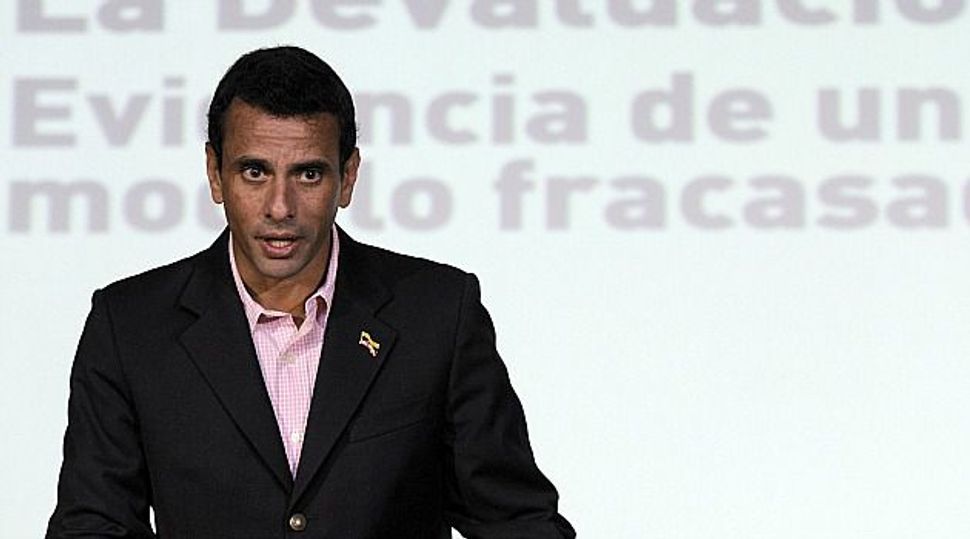 Running Against a Legacy: Henrique Capriles has received the blessing of Venezuela?s opposition to run in an election called after the death of strongman Hugo Chavez. Image by getty images

The pair have until Monday to register their candidacy for the April 14 vote, which will determine whether Chavez’s self-styled nationalist-socialist revolution will live on in the OPEC nation, home to the world’s largest proven oil reserves.

Chavez died on Tuesday at age 58 after a two-year battle with cancer.

He pushed a snap election to cash in on a wave of empathy triggered by Chavez’s death, and was sworn in as acting president on Friday to the fury of Capriles.

The 40-year-old Miranda state governor, who lost to Chavez in October but garnered the oppositions’ biggest vote against him, accused the government and Supreme Court of fraud for letting Maduro campaign without stepping down.

“It’s terrible what they have done. They have violated the constitution repeatedly,” said opposition supporter Beatriz Rueda, 62, who works in a Caracas travel agency.

Maduro, who was sworn in as acting president in Congress on Friday and handed the red, yellow and blue presidential sash, has vowed to carry on where Chavez left off.

He has also adopted his mentor’s touch for the theatrical, accusing imperialists, often a Chavez euphemism for the United States, of killing the charismatic but divisive leader by infecting him with cancer.

Former paratrooper Chavez was immensely popular among Venezuela’s poor for funneling vast oil wealth into social programs and handouts, but he railed against the wealthy and scared investors with nationalizations.

In heavily polarized Venezuela, some well-to-do even popped champagne corks to toast his death.

Capriles says, if elected, he would copy Brazil’s “modern left” model of economic and social policies.

Venezuela’s opposition coalition backed Capriles as its candidate on Saturday, and he is widely expected to formally accept the nomination.

“I am analyzing the declaration of the president of the national election commission and will tell the country about my decision in the coming hours,” Capriles said on Twitter.

With candidates assigned a campaigning window of just 10 days, and at an immediate disadvantage given the state resources at Maduro’s disposal, Capriles faces an uphill battle.

Some argue he has nothing to gain in running, but could also commit political suicide if he opts to sit out the race and effectively hand the presidency, and a raft of economic problems like sky-high inflation and a devalued currency, to Maduro.

“There’s no doubt that it’s an uphill race for Capriles,” said local political analyst Luis Vicente Leon. “Maduro is not Chavez. … (But) the trouble is that given the race is so close to Chavez’s death, emotions get inflamed and the candidate probably continues to be Chavez rather than Maduro.

“The big challenge for Capriles is not to campaign against Chavez but to try to take the fight to Maduro … trying to show the huge gap (with Chavez) and relate it to the daily problems Venezuelans face.”

With Chavez still looming large as his remains lie in state, already visited by several million people, that will be tough.

As with communist leaders Lenin, Stalin and Mao, Chavez’s corpse is to be embalmed and put on display “for eternity”.

“He liberated us from transnational companies and stood up to imperialist countries,” Jose Vielma Mora, the governor of Tachira state, told Reuters. “We will be with Chavez forever.”