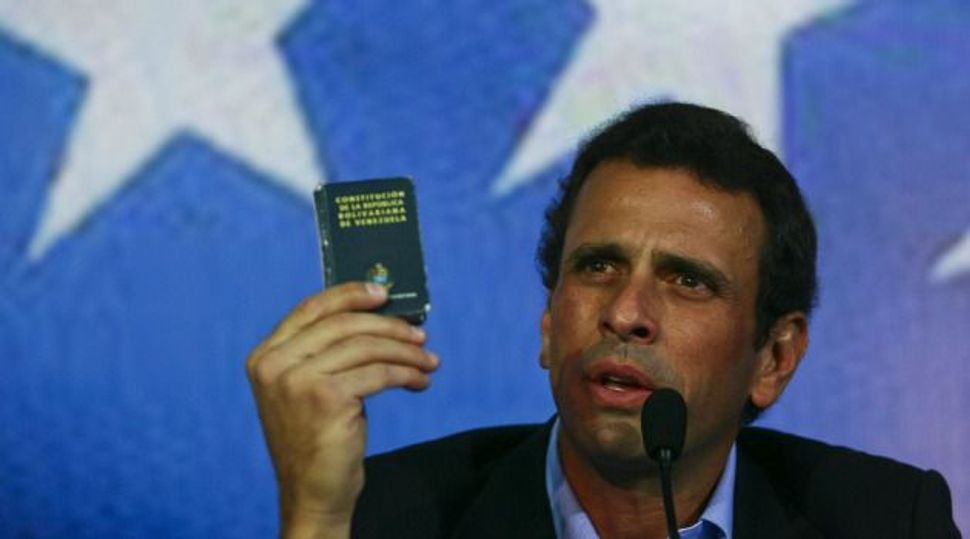 Maduro, who was sworn in as acting president after Chavez succumbed to cancer last week, is seen as the favorite to win the April 14 election, bolstered by an oil-financed state apparatus and a wave of public sympathy over Chavez’s death.

Chavez made clear before his fourth and last cancer operation in December that he wanted Maduro to be his Socialist Party’s candidate to succeed him if he died.

Maduro has vowed to continue the socialist policies of Chavez’s 14-year rule in the South American OPEC nation, including the popular use of its vast oil revenues for social programs.

But Capriles is promising a tough fight.

“Nicolas, I’m not going to give you a free passage … you are not Chavez,” Capriles said in a combative speech late on Sunday. He also accused Maduro of lying to minimize Chavez’s medical condition while he prepared his candidacy.

“Nicolas lied to this country for months,” Capriles said. “You are exploiting someone who is no longer here because you have nothing else to offer the country … I don’t play with death, I don’t play with suffering, like that.”

Within minutes, in a late-night address to the nation, Maduro said his rival was playing with fire, offending Chavez’s family and risking legal action.

“You can see the disgusting face of the fascist that he is,” a visibly furious Maduro said, alleging that the opposition was hoping to stir up violence.

“His aim is to provoke the Venezuelan people.”

At stake in the election is not only the future of Chavez’s socialist “revolution,” but the continuation of Venezuelan oil subsidies and other aid crucial to the economies of left-wing allies around Latin America, from Cuba to Bolivia.

Both Maduro and Capriles were to formally register their candidacies with Venezuela’s election authority on Monday.

Thousands of Maduro supporters, dressed in socialist-red and waving photos of Chavez, milled in the streets at the election board’s headquarters in downtown Caracas. “I’m backing Maduro because Chavez asked us,” said law student Marliely Lopez, 22.

Shaken by Chavez’s death and now immersed in an ugly election campaign, Venezuelans saw some semblance of normality return on Monday as most schools and shops re-opened after being closed for most of last week.

The official mourning period for Chavez ends on Tuesday.

Several million have paid their respects at his coffin at a military academy in a dramatic outpouring of grief.

Though criticized by many for his authoritarian tendencies and handling of the economy, Chavez was loved by millions, especially the poor, because of his own humble background, plain language, attacks on global “imperialists” and the domestic “elite,” as well as his welfare policies in Venezuela’s slums.

In death, he is fast earning a near-religious status among supporters, perhaps akin to that of Argentina’s former populist ruler Juan Peron and his deeply loved wife Eva Peron.

State TV has been playing speeches and appearances by Chavez over and over, next to a banner saying “Chavez lives forever.”

“We have the honor of having shared with the Bolivarian leader the same ideals of social justice and of support for the exploited,” Chavez’s friend and mentor, Fidel Castro, said in the latest of many tributes to him.

“I remembered the times he joked with me saying that when both of us finished our revolutionary work, he would invite me to spend time by the Arauca River in Venezuelan territory, which reminded him of the rest he never had.”

Chavez’s many detractors are keeping a low profile. But they say his memory is being burnished to forget less savory parts of his rule like the bullying of opponents and stifling of private businesses with nationalizations often announced on a whim.

Capriles, a 40-year-old centrist governor who describes himself as a “progressive” and an admirer of Brazil’s model, ran in the last presidential election in October, taking 44 percent of the votes, but was unable to prevent Chavez’s re-election.

While attacking Maduro’s handling of the crisis over Chavez’s cancer, Capriles will try to turn the focus of this month-long election campaign to the many day-to-day problems afflicting Venezuelans, from electricity cuts to crime and an inflation rate that is among the world’s highest.

Maduro, 50, a burly one-time bus driver and union leader who echoes Chavez’s anti-imperialist rhetoric, is sure to make his former boss the centerpiece of his campaign while casting himself as the only heir.

“This is going to be a really tough campaign for us, we know,” said an aide at Capriles’ office in Caracas.

“It’s hard to get everyone enthused and pumped again, we’ve only got a month, and we’re fighting Chavez’s ghost, not Maduro. But believe me, we’ll give it our best.”

Chavez’s death and the imminent vote have eclipsed other pressing issues in Venezuela, including a raft of economic austerity measures the government had been expected to announce