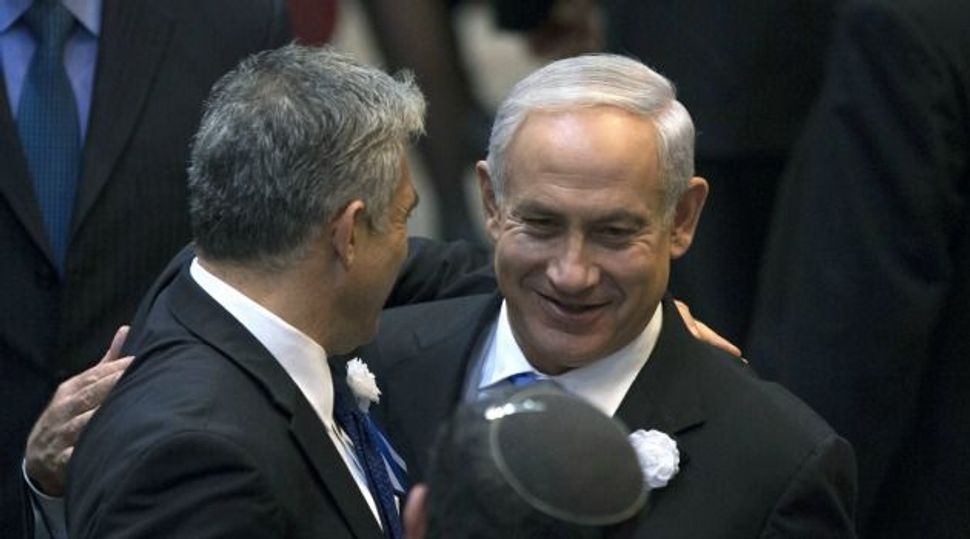 Prime Minister Benjamin Netanyahu clinched deals for a coalition government on Thursday reflecting a shift to the centre in Israel and a domestic agenda that has shunted peacemaking with Palestinians to the sidelines.

In control of 68 of parliament’s 120 seats, the right-wing leader’s new administration is expected to take office next week, just days before a visit by U.S. President Barack Obama, his first to Israel since entering the White House.

“There is a government,” said Noga Katz, a spokeswoman for Netanyahu’s Likud party, citing agreements with the centrist Yesh Atid and far-right Jewish Home parties as well as with a smaller faction led by former foreign minister Tzipi Livni.

Netanyahu’s long-time partners, ultra-Orthodox parties effectively blackballed by Yesh Atid and Jewish Home over social benefits and military draft exemptions for religious Jews, will not be in the new coalition born of a Jan. 22 parliamentary election.

Although Lapid, has advocated a resumption of peace talks with the Palestinians stalled since 2010, his party’s second-place finish was a reflection of a renewed public focus on bread-and-butter issues such as the high cost of living.

Public expectations are high that the new government could effect real change in what many Israelis see as state coddling of the ultra-Orthodox, whose welfare benefits and exemption from the military provide little incentive or opportunity to learn skills and contribute to the economy.

Netanyahu will turn his attention again to the Palestinian issue and Iran’s nuclear drive in his talks with Obama, with whom he has had a testy relationship. But U.S. officials have said Obama is not coming with any peace plan and expectations of any swift movement on the Israeli-Palestinian track are low.

“We hope that this Israeli government will choose peace and negotiations and not settlements and dictation,” Palestinian chief negotiator Saeb Erekat said.

Lapid and Bennett each said they expected to sign coalition deals with Netanyahu later in the day. Livni made her pact with the prime minister several weeks ago.

The agreements on Thursday were sealed before a March 16 deadline for Netanyahu to announce a new government. Yesh Atid said Lapid would become finance minister. Israeli media reported Bennett would get the trade and industry cabinet post.

He and Bennett, 40, took kingmakers’ roles in the coalition bargaining by forming a negotiating alliance that frustrated Netanyahu’s efforts to retain his largely loyal ultra-Orthodox partners for his third term in office.

Bennett, who Israeli media said would get the industry and trade portfolio, rejects any future Palestinian state and has strong support among Israeli settlers in the occupied West Bank.

But he has pledged not to be an obstacle to peace talks, saying that in any case, he does not believe they will achieve anything. Neither Bennett nor Lapid have spoken out in detail on how they would deal with the Iranian issue.

Palestinians have demanded Israel suspend construction in settlements in the West Bank and East Jerusalem, areas captured in the 1967 Middle East war and which they seek, along with the Gaza Strip, for a future state.

Netanyahu has called on the Palestinians to return to the talks without preconditions. Most countries regard Israel’s settlements as illegal.