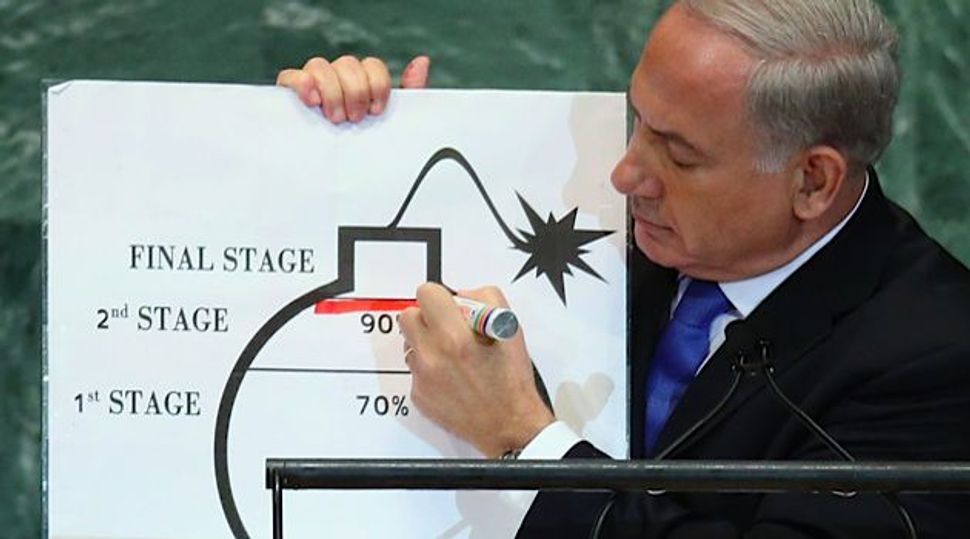 U.S. President Barack Obama visits Israel next week at the onset of spring – the “red line” previously drawn by his host, Prime Minister Benjamin Netanyahu, to trigger an attack on Iran’s nuclear sites.

But an Israeli-Iranian war, Washington’s nightmare as it tries to scale back defence commitments abroad and avoid a draining Gulf oil crisis, does not appear trip-wire imminent.

Officials and analysts say Iran has warded off the Israeli threat by calibrating its mid-level uranium enrichment so that it does not accrue enough fuel for a potential first bomb – the threshold Netanyahu warned about in a United Nations speech in September.

He was presenting a worst-case extrapolation from U.N. nuclear inspector reports. The most recent of those, however, found a slowdown in the stockpiling of the 20 percent fissile uranium that Iran, in the face of mounting Western suspicions, says is part of an entirely peaceful programme.

Netanyahu has not publicly revised the spring-to-summer 2013 dating for his “red line”. But several Israeli officials privately acknowledged it had been deferred, maybe indefinitely.

“The red line was never a deadline,” one told Reuters.

Yet while mobilising Gulf forces and saying it was open to military force as a last resort, the Obama administration has resisted Israeli calls to present Tehran with a clear ultimatum.

“There’s a window – not an infinite period of time – but a window of time where we can resolve this diplomatically, and that it is in all of our interests,” he told Channel Two TV.

The U.S. “red line” was Iran reaching the verge of acquiring a nuclear bomb, Obama said, adding: “That would take over a year or so … But obviously we don’t want to cut it too close.”

Confidence in Obama is not unanimous among Netanyahu’s circle. While one Israeli official, speaking to Reuters on condition of anonymity, said “American presidents don’t bluff” and that therefore Obama should be trusted, another worried U.S. planners might miss an Iranian dash to nuclear arms capability.

A Feb. 21 U.N. report said Iran had 167 kg (367 pounds) of mid-level enriched uranium, in gas form, after converting some of the stockpile to solid reactor fuel. Experts say it would need 240 kg to 250 kg of the gaseous material for a bomb, though the fuel would have to be further enriched to 90 percent purity.

Yet Iran has also been expanding centrifuges at an underground site so that it could rapidly ramp up mid-level enrichment if it wanted to, diplomats say.

Netanyahu alluded to those developments on March 4 when he reiterated his “red line” in a speech to a pro-Israel lobby in Washington, saying Iran was “putting itself in a position to cross that line very quickly once it decides to do so”.

The second Israeli official posited Iran could gather 230 kg to 240 kg of mid-level uranium – just short of a bomb’s worth – and then, between inspectors’ weekly visits to the enrichment plants, churn out the few kilograms required to close the gap.

Next, it could move all the material to a secret location for prospective later processing into weapons fuel, making the Islamic Republic a “latent nuclear power”, the official argued.

“For now, we know what sites would have to be targeted in a military strike,” the official said. “Can any of us, even the Americans, be sure of having such full knowledge in the future?”

The United States sounds more secure about nuclear inspections and intelligence monitoring of the Iranians, as well as in its ability to intervene militarily at short notice.

“We assess Iran could not divert safeguarded material and produce a weapon-worth of WGU (weapons-grade uranium) before this activity is discovered,” U.S. National Intelligence Director James Clapper said on Tuesday.

Gary Samore, Obama’s former nuclear non-proliferation adviser, disputed the idea that Iran would break out of the U.N. inspections regime with just one bomb’s worth of fuel, or that it would be capable of making a quick switch to the highest level of uranium enrichment, given its technical lags.

“Nobody knows, including the Iranians, how much 20 percent (enriched uranium) they need to have a bomb’s worth. They have never done it. They have never converted,” Samore, who is now executive director at Harvard Kennedy School’s Belfer Center for Science and International Affairs, said in a phone interview.

That made threshold questions “inherently ambiguous”, said Samore, who referred to Netanyahu’s “red line” alternatively as a “red zone”.

Mark Fitzpatrick, a former U.S. State Department official who heads the non-proliferation and disarmament programme of London’s International Institute for Strategic Studies, had similar doubts about whether Iran would try to sneak past Netanyahu’s “red line” and, if so, whether Israel would respond with strikes.

“Nobody’s going to make a war-or-peace decision based on a few kilograms of 20 percent enriched uranium,” he said. “Nobody knows what Israel’s real ‘red line’ is. I don’t think Israel knows either.”

Fitzpatrick faulted Netanyahu for locking on to Iran’s 20 percent enrichment, arguing that this risked distracting from ongoing progress in other risky aspects of its nuclear programme like centrifuge improvements and stores of low-purity uranium.

“That may not have been a clever way of putting it, because Iran is able to make tactical adjustments and can push back the so-called ‘red line’ as long as it wants,” he said.

But Fitzpatrick also saw a tactical gain for Netanyahu “in reminding the world that there was a concrete threat here, after the world has heard so much sabre-rattling from Israel”.

Israel, which is reputed to have the region’s sole atomic arsenal, has spoken about being ready to attack Iran for close to a decade – rhetoric some Israeli officials say was designed, at least in part, to stiffen the determination of war-wary world powers to find a diplomatic alternative through sanctions.

Samore said the international coalition had been “deeply energised for years” in confronting Tehran. “I think we still have a reasonable prospect of stopping them, and that if the Iranians misstep, the U.S. will act,” he said. (Writing by Dan Williams; Editing by Jeffrey Heller and Will Waterman)