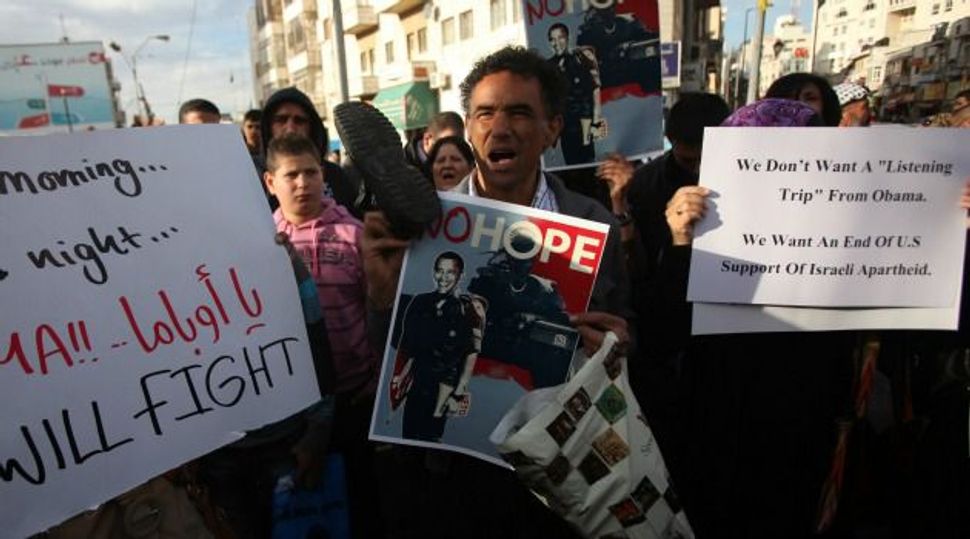 No Hope or Change: Palestinian protesters denounce President Obama for failiing to push Israel for peace progress ahead of his visit to region. Image by getty images

Palestinian police scuffled on Tuesday with scores of demonstrators protesting against the visit of U.S. President Barack Obama to the occupied West Bank later this week.

Dozens of officers and plainclothes policemen prevented the crowd from reaching the main offices of Palestinian President Mahmoud Abbas in the Palestinians’ de facto capital Ramallah, leading to shoving, but no serious injuries.

Palestinians are sceptical of Obama’s visit, which U.S. officials have said will not seek an immediate revival of peace talks with Israel.

Negotiations broke down in 2010 in a dispute over Israeli settlement construction on land the Palestinians want for a state. Abbas has said Israel must stop settlement building in order for peace negotiations to start again. Israel has called for a resumption of talks with no preconditions.

“It’s a slap in the face. People are angry and disappointed that this far into his presidency, Obama has done nothing, and aid to Israel’s occupation continues to flow,” demonstrator Huwaida Arraf said.

Obama arrives in Israel on Wednesday. During his three-day visit he will hold separate meetings with Israeli Prime Minister Benjamin Netanyahu in Jerusalem and on Thursday will meet with Abbas in Ramallah.

A heavy security presence has been building up in Jerusalem and Ramallah ahead of Obama’s visit. About 5,000 Israeli police and security officers will provide security in the streets of Jerusalem, where main roads will be blocked off as police helicopters escort the presidential convoy.

A Palestinian security source said 3,000 Palestinian policemen will be deployed in the West Bank, where protests have been on the rise in the past few weeks, with nine Palestinians killed in clashes with Israeli forces there since December.

Obama on Friday will visit Bethlehem’s Church of Nativity, revered as the birthplace of Jesus and depart for neighbouring Jordan later that day.

Few Palestinians expect his trip to change their lot and their views have ranged from anger to bemusement.

About a dozen protesters in Bethlehem drove cars over a banner of Obama on Monday, painting a swastika on his forehead.

Palestinian singer Alaa Shaham and fellow artists recorded a satirical video clip in which an actor playing Obama is shown stuck at an Israeli checkpoint and driving through a crowded Palestinian refugee camp in a BMW.

“Obama is late, poor guy. He must have a good excuse,” Shaham sings on the video, which since being uploaded to YouTube on Monday night been viewed more than 10,000 times.

“We’re trying to send him a message. We welcome him, it’s an important visit of course. But U.S. policy has frustrated Palestinians – it disregards their cause,” Shaham told Reuters.