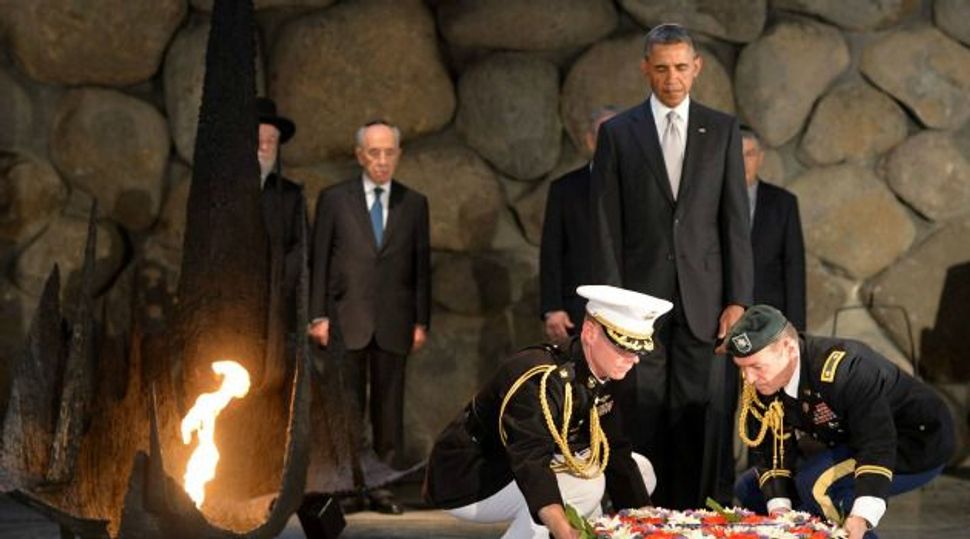 President Barack Obama visited Israel’s most powerful national symbols on Friday, paying homage at the Holocaust memorial and the graves of the founder of modern Zionism and assassinated prime minister Yitzhak Rabin.

The image of Obama crouching in reflection after laying a wreath in the Yad Vashem memorial to the six million Jews killed by Nazis added another emotional layer to a three-day trip full of symbolic gestures and appeals for peace.

Wearing a Jewish skullcap, Obama rekindled an eternal flame next to a stone slab above ashes recovered from extermination camps after World War Two.

“We have a choice to acquiesce to evil or make real our solemn vow – never again,” Obama said.

Earlier, in accordance with Jewish tradition, he placed stones on the graves of Theodor Herzl, the Zionist visionary who died more than four decades before the 1948 founding of Israel, and Rabin, who was shot dead in 1995 by a Jewish gunman opposed to his peace moves with the Palestinians.

Officials said the visit to Yad Vashem and the Mount Herzl cemetery in Jerusalem was aimed at correcting an impression the president had given in a speech in Cairo in 2009, where he appeared to argue that the legitimacy of the Jewish state stemmed from the Holocaust.

At Yad Vashem, Obama made clear he recognised that Jewish roots to the Holy Land were centuries-old.

“Here on your ancient land, let it be said for all the world to hear, the state of Israel does not exist because of the Holocaust, but with the survival of a strong Jewish state of Israel, such a Holocaust will never happen again,” he said.

Obama was due to fly later in the day to Jordan for talks with King Abdullah, a U.S. ally, about an array of problems, including the civil war in neighbouring Syria and stalled Israeli-Palestinian peace moves.

Obama has tried to win over a sceptical Israeli public, assuring them of full U.S. support at a time of growing tensions with Iran over its nuclear ambitions and anxiety over the war in Syria.

But in a speech on Wednesday, he has also urged Israelis to push their political leaders to take risks and secure peace with the Palestinians, calling on his audience of university students to put themselves in the shoes of their occupied neighbours.

Winning applause in Jerusalem, the president received a cooler reception on Thursday during talks in the West Bank with Palestinians, who are disappointed Washington is not applying more pressure on Israel to halt settlement activity.

Obama has reiterated to Israeli Prime Minister Benjamin Netanyahu that settlement building in the West Bank, land the Palestinians want as part of a future state, was detrimental to peace efforts.

But he retreated from the overt calls during his first term for a halt to the building and he has offered no new peace initiative during his trip, saying he had just come to listen.

After a final round of talks with Netanyahu on Friday, he will meet Palestinian President Mahmoud Abbas again when he visits to the West Bank city of Bethlehem to see the Church of the Nativity, where Christians believe Jesus was born.

The tour is seen as a message of solidarity to dwindling Christian communities in a turbulent region.

Obama will then head to Amman where he hopes to reassure Abdullah of Washington’s support at a time when it is flooded with refugees from Syria and battling economic difficulties and tensions from the “Arab Spring”, aides say.

Obama and Abdullah will discuss the spillover of the Syrian conflict to Jordan, where an influx of more than 350,000 refugees has strained resources.

Obama backs the Syrian opposition’s effort to oust Syrian President Bashar al-Assad but has limited its support to non-lethal aid to anti-government rebels despite growing calls from European and Gulf Arab allies to take a stronger tack.

The king has taken a mostly cautious line on Syria, calling for Assad to go, but advocating a political solution and not arming the Syrian leader’s foes. Jordanian authorities worry that any emergence of Islamist rule in a post-Assad Syria could embolden Islamists who are the main opposition group in Jordan.

Also on the agenda will be the Israeli-Palestinian conflict.

Jordan is one of only two Arab states – Egypt is the other – to have signed peace treaties with Israel and is seen as a potential player in any future U.S.-led peace push. It also has a majority Palestinian population.

The state of Jordan’s troubled economy, which receives nearly $360 million in U.S. economic assistance, will also be on the agenda.

Obama will encourage Abdullah to press ahead with a programme of economic and political reform. Jordan has been the scene of mostly peaceful street protests, rather than the uprisings that have shaken other Arab countries, and the king has responded with cautious steps toward democracy